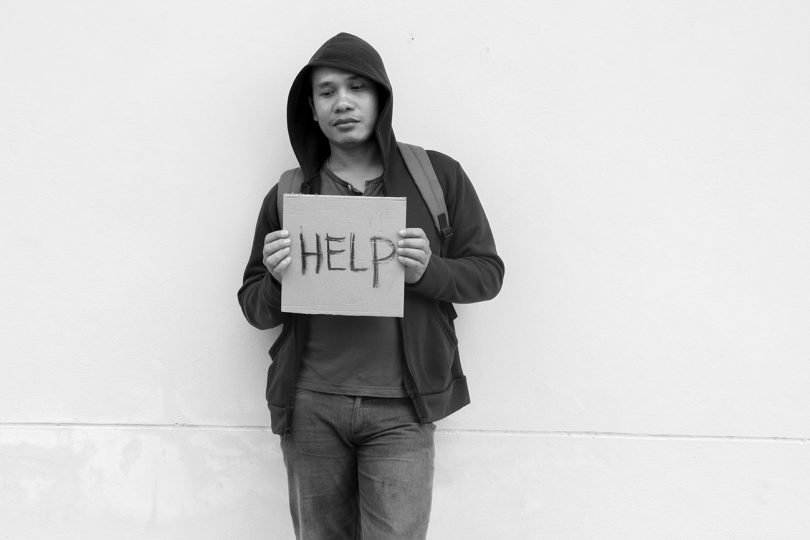 A senior economist (who wishes to remain anonymous) argues that It is no exaggeration to trace the crisis of social cohesion and trust in political institutions and the collapse of traditional political parties in Eurozone countries such as Italy and Greece directly to sky-high rates of youth unemployment. This article examines the nature and causes of the phenomenon.

The EU is very keen to portray itself as a youth-friendly organisation. But in one key respect at least, its record is far from being youth friendly – that of youth unemployment. Youth unemployment in much of the EU remains at very high levels and is not only a social blight but is likely to be a drag on future economic performance.

The situation is especially acute in the euro area. Although youth unemployment in the euro area peaked in 2014 and has been dropping in recent years, it remained at 17.5% at the start of this year, still more than two percentage points higher than just before the global financial crisis in 2008.

Moreover, standard measures of youth unemployment do not tell the whole story. As ECB President Draghi argued in 2017, we need to look at wider inactivity measures to get the full picture. One of these is the broad U6 unemployment measure which takes into account underemployed part time workers, persons seeking work but not immediately available and persons available to work but not seeking work. Our estimate of this measure for the 15-24 age group suggests a broad unemployment rate of over 30% (see Chart 1). 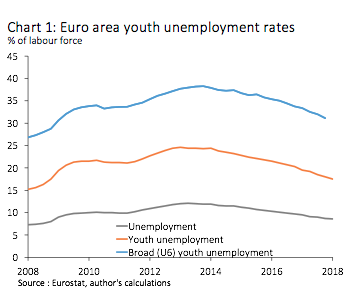 The potential costs of youth unemployment on this scale extend far beyond the mere fiscal burden governments have to shoulder to support the jobless, as the ECB has acknowledged. High youth unemployment is likely to be a drag on productivity and innovation as creative and curious youngsters – who also tend to move jobs more often, disseminating their learning and skills – are shut out of the workforce. Such exclusion is often lengthy, too as in the worst-hit countries a fifth or more of the young unemployed have been so for a year or more.

The euro area is even wasting the skills of many of its most educated young people: among recent graduates aged 20-34, non-employment rates in many states are over 15%. Even for those young people lucky enough to be in work, a startling 51% are on temporary contracts – compared with just 14% in the UK. This is in part the result of labour market reforms that have created a segmented labour market, with lots of protections for full-time insider workers while the young have been pushed into insecure ‘mini-jobs’. 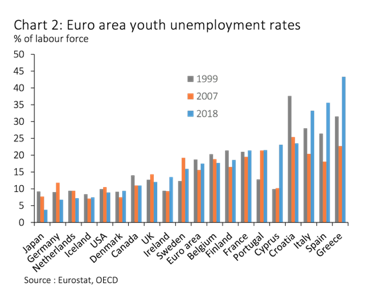 Why is youth unemployment in the euro area so high? Certainly there are long-standing structural reasons. At an aggregate level it was high even before the recession and financial crisis started in 2007-08 and it is very notable that the problem is far more severe in some euro area countries than others. In Germany and the Netherlands, for example, youth unemployment is – and has historically been – far lower than in southern Europe thanks in part to well-functioning education and training systems. 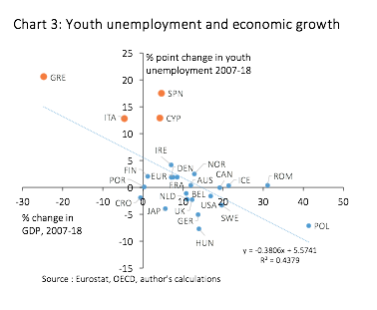 What is also notable about the high rates of youth unemployment in several euro area countries is that they are not only higher than a decade ago, but in many cases also much higher than in 1999 – the year when the euro was introduced.

This timing is unlikely to be a coincidence. Joining the euro has greatly narrowed the room for manoeuvre individual member states have to pursue aggressive counter-cyclical macroeconomic policies so that each economic downturn appears to leave youth unemployment at an ever-higher level. Indeed, in recent years euro membership has actually obliged several member states to impose fiscal austerity policies despite weak output growth, worsening unemployment even more. Countries such as Italy and Greece have experienced the worst possible mix of rigid labour markets and deflationary macroeconomic policies.

The contrast between the extreme deflationary policies adopted in Greece since 2010 and the very different polices followed in Iceland (featuring capital controls and steep devaluation) is instructive here – despite suffering a severe financial crisis Iceland has low youth unemployment and has grown faster than most euro area countries in the past decade.

High youth unemployment, and the policies which have created it, have fed into the rise of populist political movements in a number of euro area countries in recent years. Notably, many of these movements (such as Italy’s Five Star Movement) have strong support among lower age groups. It is no exaggeration to trace the crisis of social cohesion and trust in political institutions and the collapse of traditional political parties in countries such as Italy and Greece directly to sky-high rates of youth unemployment.