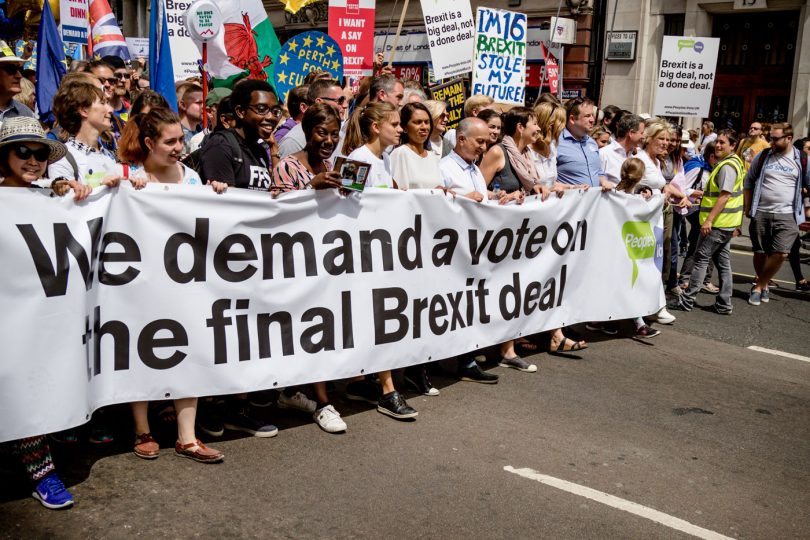 The ‘People’s Vote’ campaign is a shameless example of Populism. Indeed, it is the most frivolous and irresponsible political campaign seen in this country for more than a hundred years.

‘Populism’ has become a favourite term of political abuse for any popular political movement one does not like.  It permits its users to lump together as one phenomenon all sorts of people and parties they wish to tarnish with guilt by association.  So Brexit, we are told, is a ‘populist’ movement.  But what is populism?  There are serious attempts to define it.  One is simply that it is a movement whose leaders claim to speak on behalf of ‘the People’.  Another definition is that Populism gives simplistic answers to complex questions.  Which movement in British politics today best fits these definitions?  One in which a group of multi-millionaires, celebrities and rejected politicians, lavishly subsidized by business interests and foreign political institutions, claim to represent ‘the People’ and offer a simplistic answer to a complex problem?  The ‘People’s Vote’ campaign, of course.  What more simplistic answer could there be to our present difficulties than a second referendum?

The main argument put forward for this ‘People’s Vote’ is that we now know more about the meaning of Brexit than we did in 2016.  This is in many ways true.  We know that the predictions that Britain would be isolated, that the economy would take a plunge into recession, that unemployment would rise and so on have all proved false.  We know that George Osborne’s threat of an emergency budget with tax increases was hollow.  We know that employment is at its highest. That growth has picked up.  That wages are rising.  That a succession of major economic partners have offered to negotiate trade deals after Brexit.  That independent analyses have rubbished the apocalyptic forecasts.  On the other hand, we also know much more about how the EU operates, both from our own experience and from that of the Greeks.  Major economic studies by unimpeachable authorities have demonstrated the damage done by the EU to countries across Europe – done quite knowingly and deliberately in the interests of the EU institutions and the richer countries’ banks.[i]

All these things we know.  Or we should know and can easily find out.  But those who march for a ‘People’s Vote’ apparently don’t know them or don’t want to.  This is a real ‘Know-Nothing’ movement.  Don’t all those young (and not-so-young) marchers know what the EU has done to young people’s lives and prospect across southern Europe?  Or is it just that they don’t care?  If the former, it says little for their boasted educational superiority.  If the latter, it shows the emptiness of their claims to international solidarity.  I regret to say this, but I cannot avoid the conclusion that the ‘People’s Vote’ campaign is merely a selfish and infantile populist spasm.

But there are things we don’t know.  We don’t know where a second referendum would lead us.  Imagine that the ‘People’s Vote’ campaign got its way.  Imagine- despite all the practical, legal and political obstacles – that they secured a pro-EU majority.  Then what?  Do our self-appointed saviours have a plan?  If so, would they vouchsafe it to the rest of us?  By the time of a second referendum, we would either have left the EU (almost inevitable given the timetable), or we would have to ask the EU to extend the period of leaving under Article 50 of the Treaty of Lisbon to enable another campaign and vote.  So we would be entirely at the mercy of the EU to set the conditions under which we could creep back sheepishly into the Union.  Would those eager to lead this process EU be willing to accept every condition imposed?  Have they any views as to an acceptable relationship?  Would they agree to abandon the UK’s rebate on financial contributions, so that the famous £350 million a week on Boris’s bus would prove a huge under-estimate?  Would they agree to EU control of taxation, as is now being proposed?  Would they commit to joining the Euro, disastrous as it has been?  Would they agree to EU control of the City of London, on which many of the ‘People’s Vote’ demonstrators must depend directly or indirectly for their livelihood?  Would they give up any attempt to control EU immigration?  Would they then offer another ‘People’s Vote’ to judge their own efforts, as logic and consistency would require?

The ’People’s Vote’ campaigners claim that in the 2016 referendum we did not know what we were voting for.  If they had their way, in voting in a second referendum we would know even less.  We would have no idea what sort of EU membership they want, or what the EU member states would accept.  They might not agree at all: would all of them really want an angry and resentful UK making trouble in the future?  The ‘People’s Vote’ campaigners are living in cloud-cuckoo land.  But that too is typical of Populist movements: the rank and file are fed fantasies by their leaders.  I somehow doubt we shall be given any idea of what they are aiming at, even if they know themselves.  After all, Populist leaders avoid rational discussion and rely on slogans.  They want us to make a lemming leap over the cliff, and trust them to do … well, what exactly?

‘People’s Vote’ is a shameless example of Populism.  It is perhaps the most frivolous and irresponsible political campaign seen in this country for more than a hundred years.