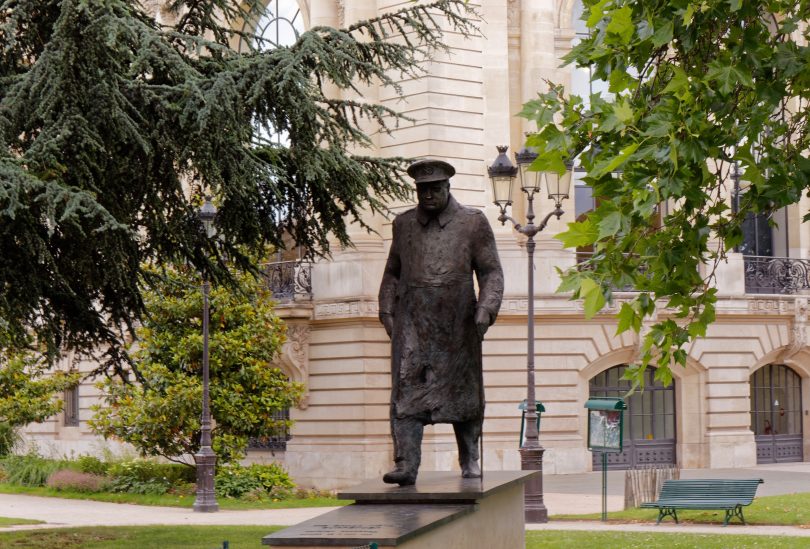 ‘ An eye-witness account of VE Day as a not quite five year old child, Winston Churchill’s vision of our future, and how that might guide us today.

Across the road on the golf course Mr Harman’s large herd of cows munched contentedly among the bunkers, clearly enjoying the spring sunshine. My elder brother, Vinnie, mafia don and life coach, and I were up early as usual. Marigold, our toddler sister slept. We had opened the front door quietly, ready to scamper out and collect whatever bargains the night had delivered. More lately the Third Reich had increased our wealth during daylight. A warm metal splinter the size of your forearm, fresh off a doodlebug fetched a whole bag of cold shrapnel. This morning we had company. Every neighbour within eyeshot was hanging out flags. Already there was a jolly, almost carefree mood. Overhead, the spring sky soared empty, quiet and peaceful.

We knew that the Germans had been chased back to Germany. Our mother had a map on the kitchen wall and stuck in paper flags as the allies advanced from west and east. The previous summer my brother and I had admired a regiment of over fifty brand new Churchill tanks on the village green before they went to France. On a warm September Sunday morning we’d watched an endless stream of Halifax and Stirling bombers towing gliders, thundering south-east, wave after wave passing low overhead, flying towards Holland. Yes, we knew our aircraft recognition; we could tell a Spitfire from a Tempest, at night the motors of a Junkers from a Dornier. We knew a doodlebug V 1 rocket from a V2 because the former stuttered and when you heard the latter it had long exploded. Our basic geography was sound but war children grow up fast. We also knew the pain of losing loved ones, hope’s gnawing ache of uncertainty when somebody close went missing. We had lost two cousins, one like a big brother – a navigator in a Lancaster, the other a Spitfire pilot. We knew the value of military hardware long before we could read.

After breakfast we strolled into town. Everyone was out on the streets and by now flags and bunting hung everywhere. Where we lived the war was over. There was nothing triumphal about the celebrations, nor the atmosphere. Japan fought harder every day – the Royal Navy was busy assembling the largest fleet in its long history off northern Australia; aircraft carriers, battleships, cruisers, destroyers, submarines. I used to draw fleets on the kitchen wall beside the map! All around us cheerful satisfaction and relief blended into a town party. People were peeling off the sticky paper strips from shop windows that had stopped glass splinters flying sideways. And we noticed smiling old lamplighters going about with step ladders. We lived in a town on the edge of London with a famous arms factory though also a foothold in the country. Not for our parents and neighbours the wild scenes witnessed by the two princesses out among the West End crowds that night. Our pleasures were simpler but no less enthralling. At dusk for the first time in our lives we saw lights coming from houses and then fairy land as all the streetlamps came on one by one.

Towards the end of his life Winston Churchill gave much thought to the future of these small islands. In his view, no longer able to draw on the natural wealth of a great empire, we would depend more and more on our brains and imagination. After retiring from Parliament, in April 1955, he went on holiday to Sicily, taking with him Lord Cherwell and Jock Colville. Churchill regretted that while Prime Minister he had not followed up on his concern that as a country we failed to produce enough scientists and technicians. He had been impressed by Massachusetts Institute of Technology and felt Britain needed a similar school. He decided to found a college bearing his name at Cambridge, one that would concentrate on teaching the sciences. Jock Colville, who had spent eight years in his Private Office, volunteered to raise the funds, a daunting task even when riding the Korean War boom.

Three years later they had chosen the trustees and had a plan. They needed three and a half million pounds – worth far more in those days – and Churchill started the fund with £25,000 himself, enough to buy a dozen family houses in those days. Churchill was also busy finishing the fourth volume of his History of the English Speaking Peoples. On the 17 October 1959 in a field on the edge of Cambridge he planted an oak tree as the foundation stone. Sir John Cockcroft, chosen as the first Master, and Clementine Churchill attended, as did Frank Cousins of the Transport and General Workers Union – his union members gave £ 50,000 for the Bevan Library of the college. At that time Frank Cousins was Chairman of the Trades Union Council. When Churchill met the trustees afterwards he learnt that the TG&W and the Amalgamated Engineering Union both had given generous donations, moreover total funds stood at £ 3 millions. They could go ahead. Another million was needed to fit out the college but they could raise that as it was built. Making it the home for the Churchill Archives would help. Since then his papers have been joined by those of Margaret Thatcher plus those of many who lived through both eras.

Today seventy per cent of the students at Churchill College are reading sciences. The college has seven Nobel Laureates – the first Master, Sir John Cockcroft won the Nobel Prize for splitting the atom. Francis Crick jointly with the American, James Watson, discovered DNA – later Crick became so incensed that a science college was building a chapel that he resigned his Fellowship and donated ten guineas to start a fund for a college brothel. The small brick chapel is just visible standing among the trees at the very top of the college lawns; there is no sign of any disreputable rival building.

Churchill had far sighted ideas. A great believer in the democracies, his mother American, he advocated joint citizenship with France in 1940 then later with the United States. At the end of his life he came round to the idea of some form of joint citizenship among all the English speaking democracies – meaning the Commonwealth and United States. Immediately after the war he wanted half the population of the British Isles to emigrate to Canada, Australia, New Zealand and South Africa and form a core Commonwealth of a hundred-million people globally. The Five Eyes intelligence pact is the only manifestation of this idea, so far, yet the most vital alliance that we enjoy. There’s a message for us all – we just have to open it.

When speaking in Zurich after the war he proposed a similar idea for Europe, then divided in half by the Iron Curtain, though very pointedly made clear his wish that the United States, Soviet Union and the Commonwealth would be its God Fathers. Nothing more.

As a mature four year old scrap metal spiv I didn’t know that one day as a paratrooper and then a diplomat I would have the extraordinary honour not merely to know many of those famous wartime faces but serve alongside them as immensely treasured friends. My generation are very lucky. We were born just in time to grow up with all these people during their youthful middle age and moreover charged with many of the things we chose or fate decided for us. They taught us a great deal. One lesson is believe in yourself, don’t wait for someone else to do something urgent and once started, never give up, just keep going, sort things out as you press on. Another is plan, prepare well ahead, but always keep something up your sleeve. Third though by no means least, the others are more scared than you – always be ready for the unexpected and at the decisive moment, do the last thing anyone expects.

The final twitches of Kung Flu are going to feel a bit like VE Day did for my generation – save that we’d gone through six years rather than several weeks and the losses were horrendous. Forty-thousand killed in the London Blitz and thousands more injured. A thousand killed in one night in Belfast. The last twitchings of China’s, Russia’s, the Iranian clerics’ and the EU’s imagined imperial regimes would be more akin to our experience seventy-five years ago. The damage done already by Kung Flu makes project fear look more or less invisible. Kung Flu brought a much needed sense of proportion that we’d had since learning to walk. All of us have a chance to completely reinvent our country and the world. The future belongs to new Alvin Tofflers rather than old Karl Marx. Look how clear the skies are with no mass tourism. Why not revive mass sea travel by making it faster? When I looked after an industry the only time for writing letters was on the train from Sussex. Modern science removes the need for millions to waste time and money. Personal inter-face is part of being human and just as with Internet dating, you must talk face-to-face sometimes, but you don’t need to commute every morning. Seven year olds have Donald’s twitters on their phones. Artificial Intelligence is going to create far more new jobs and new industries than all the old ones it replaces. Our cities and towns will be managed better and less wastefully. A young friend already is respected for his ideas about how we should do this. Our son and daughter are environmental scientists in Geneva and London. Very soon lockdown should give way to mass break out – imagination, invention, creation, thinking outside the box, above all the understanding of the nature of the human spirit and its expression.

And the coming era will see three groups of countries – those who believe in freedom of thought, word and deed; those who believe in fortress walls controlling everything within their empires; and those who don’t know which way to jump. I believe our destiny as a leading member of the first group is to encourage all those in the third group to jump into ours. Each time one does, Winston, I suspect will smile.