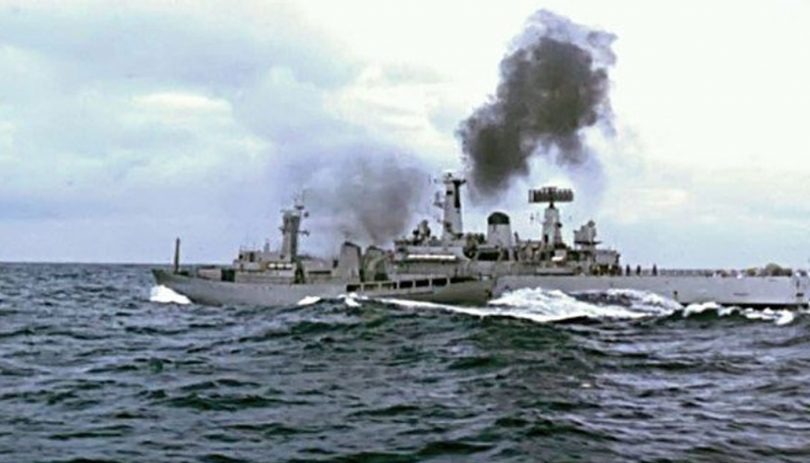 The publication of the UK’s ‘approach to negotiation’ framework has been widely and rightly welcomed. Not only is it a text-book example that supports Robert Tombs’s delightful and erudite reprise of why we and our sweet enemy, the French, are so systematically and irreconcilably different in our approaches to negotiation.

It is also a refreshing reaffirmation of HMG’s recovery of nerve and confidence in the main tradition of Castlereagh and Palmerston.

It has important things to say on both the persisting and the recent areas of my writing on Briefings for Britain: defence and fishing.

Recollect the EU slide presenting its end-state ambition for the forthcoming trial of strength with the UK, published in my previous article. It shows that an FTA is roughly 1/10th or less of its overall ambitions which, as David Blake has shown, are being pursued in a hostile manner: more like a boxing match aiming for a knock out than any intention of mutual settlement.

Half the ambition lies in the so-called ‘security component’; and upon presentation it was quite deliberately called an ‘economic and security’ treaty.

What has the UK negotiating paper to say on this ‘security component’?

Nothing. Thank goodness, nothing.

For many months, starting in the dangerous May Years, Sir Richard Dearlove, Lord Guthrie and I advocated the need for a separate Defence, Intelligence & Security Treaty believing that such an instrument would be the best way to exclude EU interference in these crucial, sovereign areas: areas in which the EU has no business to be at all. Candidly we expected that HMG would say something. If it was going to say something, then say this, we said.  We can now retire that text, for it is far, far better, more elegant and powerful simply to say nothing. And this what HMG has done. The word ‘defence’ does not appear in the document anywhere. Separately. there still remains the need for a Statutory Instrument (SI) to annul formally all and any adhesions to the emergent EU Defence Union, made unconstitutionally by Alan Duncan and officials during the period 2016-19. We hope that this will occur rapidly, not least because that clarifies the starting position for the imminent General Review of foreign policy, defence and all related matters, like international aid-giving. But for the EU the message is to forget about the right hand side of the diagram altogether. Don’t bother to ask. You will not get. Do you hear the applause from atop Nelson’s Column and the gruff lion’s roar of approval from that stocky, defiant statue in Parliament Square?

The position relating to fisheries is slightly different but equally satisfactory. Trade in fish products may be – if there are indeed to be any talks on an FTA at all – a matter for discussion within those talks. But fisheries in the round will be no part of those discussions. They will not be, as the EU wishes, addressed under “Economic Component Level Playing Field”. Not at all. No Way Jose.  Instead, they are accorded their own paragraphs – 2-5 – in Part Two of the document, which addresses “Other Agreements”: ” a range of other international agreements covering, principally, fisheries, law enforcement and judicial cooperation in criminal matters, transport, and energy” (para 1).

I do have strong concerns about ‘energy’ in this list, because the EU is now seeking cunningly and strongly, under cover from St Greta and her less idealistic and more worldly backers, to inhabit the ‘cultural hegemony’ afforded by the current hysteria to clothe itself in deep green in order to use ‘climate change/emergency’ related issues as a way to trap the Prime Minister into the high, dynamic alignment under EU control that this document explicitly rejects. It is a classic example of the “Bootleggers and Baptists” phenomenon, where rent-seekers hide behind ‘virtue signallers’.[1]   But that is for another article another day.

Para 2 begins with uncompromising clarity: The UK “is ready to consider an agreement on fisheries that reflects the fact that the UK will be an independent coastal state at the end of 2020.”  In case this is not clear enough, Para 2 repeats itself: ” the framework agreement on fisheries should provide a clear basis for an on-going relationship with the EU, akin to the EU’s relationship with other coastal states, one that respects the UK’s status as an independent coastal state and the associated rights and obligations that come with this”  Got it?

Para 3(2) then sets out – not for negotiation – how any such agreement might be framed: “The UK will no longer accept the ‘relative stability’ mechanism for sharing fishing quotas, which is outdated”—diplomatic language for ‘loaded against the UK’s interests’—”based on historical fishing activity from the 1970s. This means that future fishing opportunities should be based on the principle of zonal attachment, which better reflects where the fish live, and is the basis for the EU’s fisheries agreement with Norway”.

‘“Zonal attachment” of a stock is the share of the stock residing within a particular country’s economic zone, if necessary weighted by the time it spends in a country’s zone over a year. This, then, determines the share that each country gets of the total catch quota for that stock.’[2] This is both scientifically robust and logical. It is the principle that the British fisheries interests have long sought, and here it is plainly stated. It is not what the EU wants or is likely to agree.

How will this be enforced?  Paragraph 3 states that “Any EU vessels granted access to fish in UK waters in annual negotiations would be required to comply with UK rules and would be subject to licensing requirements including reporting obligations.” (emphasis added).  This can embrace what I recommended: a form of marine lorry tachometer black box. Now we come to the nub of it.

Para 3 (4) elaborates in a polite way with suitable threat implied. The UK is “open to providing, in the agreement on fisheries, for the creation of a forum for cooperation on wider fisheries matters outside of annual negotiations. This could include cooperation on matters to support responsible fisheries management, such as data-sharing, science and control and enforcement.” (emphasis added)

Para 3 (4) (e) starts to unveil the mailed fist: “It should include provisions for sharing vessel monitoring data and information to deter and eliminate illegal, unreported and unregulated fishing. If annual negotiations provide for access to fish in UK waters, then additional data-sharing would be required for control and enforcement.”

Sub-section (f) completes the threat: there should be “arrangements for dispute settlement along the lines common to other fisheries agreements, including provision for the suspension of the agreement on fisheries if necessary”. (emphasis added)

This negotiating framework is clear, strong, cringe-free and therefore at last, thank goodness, on British terms, articulated with our reawakened mental and moral sinews. However it has material and legal implications and those are exactly what I spelled out in the scoping sketch of necessary naval deterrence given in the long essay.

I write this update from the USA where I have been having productive informal conversations about that paper. I shall shortly be returning to the UK with helpful and new ideas on ways to create and field the necessary naval deterrent for the fast-approaching ‘surge’ period leading up to Exit Day from the Common Fisheries Policy.

This negotiating framework paper steers the same course that my earlier paper set because it clearly employs a similar assessment of the correlation of forces and of the deeper motivation of our EU co-locutors to that spelled out in the Tombs, Blake and earlier Prins essays referred to above.

Gwythian Prins is Emeritus Research Professor, London School of Economics, and a specialist on security and defence.