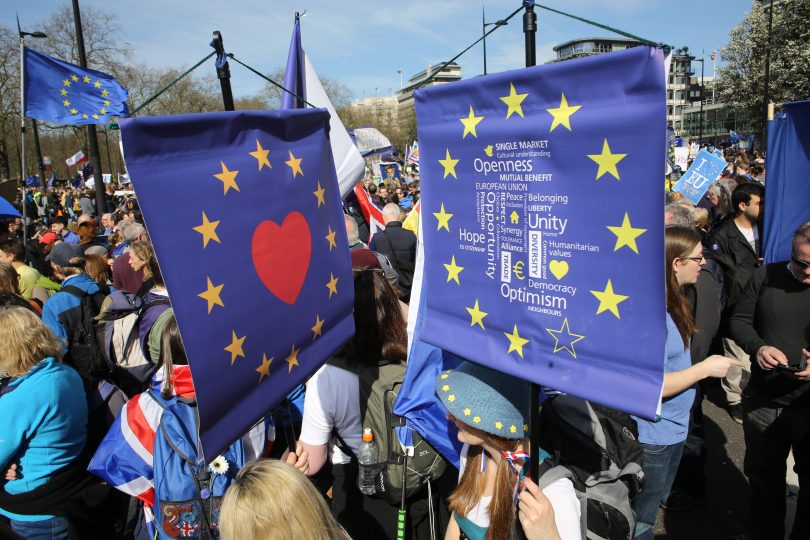 The most striking and disturbing development since the 2016 referendum has been the emergence of what can without much exaggeration be termed a Remainer revolt: a variegated campaign to undermine or even overturn a legal and democratic decision.

The most striking and disturbing development since the 2016 referendum has been the emergence of what can without much exaggeration be termed a ‘Remainer Revolt’: a variegated campaign to undermine or even overturn a legal and democratic decision.  It has been little, if at all, analysed because those who are most accustomed to analysing political and cultural phenomena overwhelmingly share its assumptions.  They have been too busy describing the Leave majority as in various ways pathological that they have not noticed the beam in their own eye.

The unusual nature of the Remainer Revolt is however shown by the extraordinary nature of the arguments that have been used – arguments that could be used to discredit any democratic procedure, and which have rarely if ever been heard in any advanced country since the nineteenth century.  For example: that most voters did not know what they were voting for; that working-class voters were too ignorant to make a choice; that people without advanced education should have their political rights reduced; that older people should have no right to an equal democratic voice.

Leaving aside basic ethical questions concerning equal rights – questions that most of us would have thought had been resolved by the end of the 19th century, if not earlier – these views show an astonishing misunderstanding of what democracy is and what it is for.  They lack the slightest degree of historical awareness.  Yet they are put forward with assurance by people who openly regard themselves as the epitome of enlightenment and intelligence.  They might meditate on a famous declaration made as long ago as 1647:

We are therefore going to attempt – or at least to begin to attempt – to analyse various aspects of this revolt.  Left and Right have their own versions of it.  So do professional interest groups and age cohorts.  These aspects we shall discuss.

Starting with the basics, I suggest a simple taxonomy of types of Remainer, and an estimate of their numbers (‘Who Are the Remainers?’).  The true believers (Ideological Remainers) are far fewer than the 48 percent who voted in the Referendum: indeed, the EU’s own polls showed that only 5 percent of British people felt strongly ‘European’ – a proportion confirmed by a different poll taken on the day of the referendum.  Most Remain voters I categorize as either Professional Remainers (those with a clear interest in taking a pro-Remain line), or Worried Remainers, by far the most numerous, who explained their own motivation as fear of economic consequences.  Scotland and Northern Ireland are of course different, and understandably so: in one case, nationalist hopes make Scotland an outlier in Europe in its level of support for the EU (though it will be interesting to see whether the fate of the Catalan nationalists causes second thoughts); in the other, fear for internal peace in Ireland (subsequently whipped up by the Irish government and the EU) was an understandable motive for opposing change.

However limited their numbers, the combination of Ideological Remainers and Professional Remainers (the two of course often overlap) hold very influential positions in politics, the media, business, education, and the civil service.

Briefings for Brexit is launching a collective study of this important phenomenon.  Daniel Robinson (‘Europe: A New Nationalism’) examines the way in which a distorted and wholly negative presentation of British history has contributed to what he considers self-loathing: ‘a deep suspicion of Britain as a nasty, backward, and particularly xenophobic country that needs to be pinned-down for the good of itself and others by benign European masters.’  This is compensated for by a new form of European nationalism, which is now working to keep Britain in the customs union or single market, and thus create a ‘dependent’ quasi-colonial relationship between Britain and the EU which ‘mimics the relationship between Britain and Canada a hundred and fifty years ago’.  This mindset is most pronounced among those who came of age during the first years of this century, though it is backed up among older people whose alienation goes back to the Cold War.

Robert Colls (‘English idiom’) perceives astonishing ‘levels of aggression and malice’ towards Leave supporters, and traces it to a ‘new liberalism [which] believes in itself more than it believes in the people – which is awkward for a liberal ideology whose narrative has always been the masses against the classes.’

The group that voted most in favour or Remain was the 18-34 age group.  Joanna Williams (‘Learning to love the EU’) suggests an important vector for the mindset discussed by Daniel Robinson: the education system itself, which is ‘failing to produce independent-minded critical thinkers and is instead creating conformist and obedient citizens far too fearful of being labelled racist or nationalist to dare challenge the pro-EU consensus that dominates the graduate professions in which they seek employment.’

But what passes for ideology is not the whole, or perhaps the main story, writes a Graduate Student (‘The Remainer Revolt: Young People’).  Young metropolitan voters were ‘particularly vulnerable to ‘Project Fear’ predictions of job and revenue losses in the City of London’.  Others ‘have spent their youth going inter-railing on the continent, or heading to Spain for a cheap and cheerful booze-up, and have friends who have benefited from programmes such as Erasmus. They may not have thought about the EU much before the referendum, but their instinct is that it is a good thing. They equate Remain politics with common sense.’  Robin Dunbar (‘What Have the Remainers Not Understood?’) suggests that a degree of ignorance – ‘the complete absence of any appreciation of how the EU constitution works and how it came to be the way it is’ – facilitates this uncritical support for ‘Europe’.

But if a certain naïve and good-natured Europhilia is understandable, it can go along with heavy pressure to conform: ‘In a group of young, well-educated people, it is the norm for Brexit to be bemoaned and jokes to be made without concern. There is no need to ask how anyone in the charmed circles of the university-educated young voted: we’re all Remainers here, of course.’ Here we see reproduced informally among young adults the conformity that has roots at school.

Though continuing support for Remain post-referendum may be for many voters an attempt to cling to the status quo, in political terms it shows a break from the mainstream traditions of both major parties.  As Richard Johnson reminds us (‘In Supporting Brexit, Labour Rediscovered Its Radical Tory Socialist Tradition’), Britain’s radical tradition has been closely intertwined with the idea of a national democracy: ‘Euroscepticism was the mainstream position of the Labour Party until the late 1980s.’  In the 2016 referendum, approximately 161 Labour held constituencies voted Leave, and only 70 voted Remain.  In the 2017 general election, Labour embraced Brexit in its manifesto, and gained its biggest electoral swing since 1945.  As Greece, Spain, and most recently Italy have been forcibly reminded, Left-wing economic policies are incompatible with EU membership.  Hardline Labour Remainers are turning their backs on their traditions and on their working-class electorate.

For Conservatives, as Daniel Robinson points out (‘The Wind of Change and Tory Remain’) hard-line support for Remain against a clear democratic vote goes fundamentally against the defining tradition of Toryism: to accept the popular will and manage change.  Remainers in the party, he suggests, have attached themselves to a particular strand of Conservatism: that which takes politics as being simply about the provision of material benefits.  But they fail to comprehend ‘the force of values and principles themselves’, including popular sovereignty – ‘a potent issue in western democratic politics since the late-eighteenth century.’  Remainers in both parties seem oblivious to the political and even the electoral dangers of their positions.  How can this be explained?  Evidently, some politicians fall into the category of Professional Remainers, whose careers – present, future, or indeed past – tie them firmly to a certain position.  As Robinson notes with reference to Remainer Tory grandees, ‘an old adage reminds us to beware an old man in a hurry – we should be still warier of one who is about to see his life’s work shredded.’  The only logic for part of the Labour leadership seems to be the short-term desire to damage the government in the hope that collateral damage will not hurt them too.

Underlying the Remainer position in 2016 was caution: a fear of the consequences of change.  This is plausibly linked with the long-standing idea of Britain as a country in decline, too small, weak and incompetent to govern itself.  This view may often co-exist with the negative view of British history identified by Daniel Robinson.  Pamela Dow suggests in ‘Remain and the Civil Service’ that officials are mostly recruited among the Remain-leaning class, and moreover ‘are trained to see risk and cost, not opportunity and alternatives’: ‘Talk to entrepreneurs about Brexit and they see the possibility of new markets, access to new talent from across the globe, the opportunity to improve on lowest common denominator Commission policy. Talk to civil servants about Brexit and they mobilise for damage limitation.’  This attitude may have been aggravated by a development that has been going on for two decades: ‘a collapse in civil servants’ confidence, morale, and in many areas administrative competence.’

Can caution still explain the Remain reflex view today, at least among those who take an interest in European affairs, given the dangers and repeated crises besetting ‘the European project’?  Is it simply that many officials and politicians are frightened of being responsible if things go wrong?  The status quo may have few attractions, but it is always tempting to stay on board the Titanic rather than risk taking to the boats.