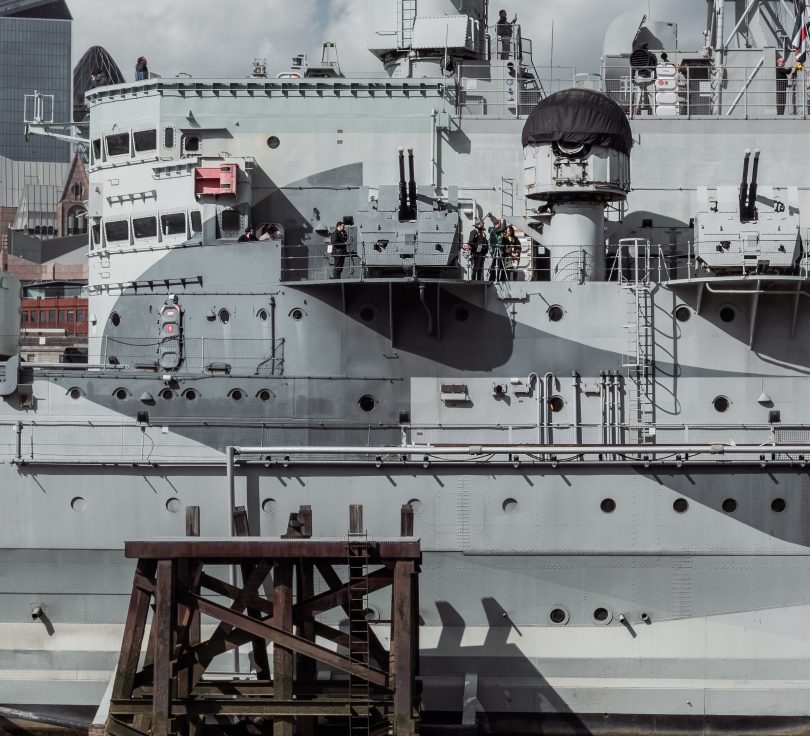 An island nation with global interests needs a navy. With two new aircraft carriers, the Royal Navy will be a formidable force. But it has survived a succession of cuts by the skin of its teeth, and the thin grey line still has big gaps in it.

‘When you’re on the phone to Downing Street later this morning, Adrian, remind the lady who ordered all those ships she’s sending south.’

Former Prime Minister Jim Callaghan ( who served in the Royal Navy) sitting on his bed while drinking coffee with the author in an Ottawa hotel room one morning during April 1982 and discussing the latest news from the South Atlantic.

Naval power acts as a deterrent to political gamblers and thereby prevents conflicts. This applies right across the spectrum from submarines armed with strategic nuclear weapons to fast patrol boats policing the seas against drug runners and pirates. Aircraft carriers are the most awesome expression of this global power – floating airfields that can travel 500 miles during a day. They are the most dangerous conventional weapon on the planet. A single US Navy super-carrier could disable a reasonable sized country during the space of a morning. They require nobody’s permission to cruise around the globe thus present a threat to most nations with hostile intent towards others. They are more discreet than any ambassador.

The Royal Navy plans to send one of its new super-carriers on a cruise to the Far East. She will be escorted by two destroyers, two frigates and a pair of attack submarines. She will take part in exercises with the US Navy and the Japanese Navy. There is even talk of basing one Royal Navy super-carrier in that region with some of the busiest sea routes. Japan already has two helicopter destroyers which are being converted to proper aircraft carriers and South Korea’s navy recently ordered its first aircraft carrier. Both navies will fly F 35 B jump jets.

For those of us who are fans of the Royal Navy this is a moment of quiet celebration. Each new super-carrier has space and equipment enough for as many (much larger and more versatile) fighters as all three Invincible class Harrier carriers could manage together. Our navy has surface capital ships once more and ready to police the seas with our allies. By next year one hopes she will have proper Airborne Early Warning, more than two squadrons of fighters and escorts capable of shooting down ballistic and hypersonic missiles. Ultimately the Royal Navy must develop swarms of air, sea and submarine drones with Artificial Intelligence for both attack and defence. But it’s a good start and took a lot of hard work by thousands of sailors and skilled workmen – many of them young apprentices – in Scotland and all over the country. The last time we had a proper navy was in the 1960s when we were still an independent nation. Unless we rebuild the navy to that level of strength Global Britain is political posturing and the government won’t fool anyone – starting with the British voters, closely followed by the Angela Merkel and the EU, last but by no means least the Americans.

Over a hundred years ago we had a naval treaty with Japan; they sent destroyers to help escort convoys through the Mediterranean during the First World War. This treaty was wound up through American pressure after the Armistice. That rejection partly started Japan on the road to war. The Royal Navy has a long history in the Far East. The largest and most powerful fleet the Royal Navy ever sent to war was the Pacific Fleet of summer 1945 – in numbers about the size of the US Navy today – but in those days just one task force in Admiral Chester Nimitz’s massive fleet to invade Japan. A campaign expected to take years and cost a million allied casualties never happened because of the atomic bombs.

Until the Chinese Revolution of 1949 the Royal Navy patrolled the Yangzi for hundreds of miles up river from the sea. Legend held that there were more ships on the Yangzi River than on all the oceans of the world.

Twice since 1949 the Royal Navy has sent a large task force to the Far East and kept it on station for several years. First during the Korean War from 1950-1953 and afterwards – the navy kept a task force off the Korean coast. Although roughly the size of our present entire navy this force was sustained quite easily because it required only a fifth of the Royal Navy’s then global strength. Throughout the Korean War a pool of three Royal Navy carriers and two Royal Australian Navy carriers ensured that one carrier from each navy patrolled Korean waters at all times. Nearly seventy years have passed since the Korean War. There is no peace across Korea even today, just an armed truce with an unpredictable dictator on the other side of the DMZ supported by its wartime ally, China.

After the Korean War the Royal Navy gradually replaced many older warships. Some went into reserve including a brand new battleship, older battleships, several modern cruisers, destroyers and frigates. Some surface ships were modernised for atomic warfare until new ships came down the slipways, many of them originally ordered to fight Japan. These included two 50,000 ton aircraft carriers, eight handsome Daring class destroyers as powerful as light cruisers and twenty-six Leander class anti-submarine frigates. All the new submarines employed German wartime inventions such as the snorkel to supply air while submerged. By the early 1960s the navy was a strong and increasingly modern force with half a dozen aircraft carriers packed with supersonic jet fighters and bombers, commando carriers and assault landing ships, cruisers, destroyers, frigates, submarines, minesweepers, fast patrol boats and plenty of support ships. There was a Home Fleet, Mediterranean Fleet and Far East Fleet (all three larger than our present navy) plus smaller squadrons in the West Indies, South Atlantic and Indian Ocean. Large, modern Coastal Forces policed the narrow seas.

Ten years after Korea the Royal Navy sent half its strength to the Far East during a deployment that lasted over four years. This time the invader was Indonesia and the victim newly created Malaysia under attack from groups of Indonesian soldiers along the jungle frontiers of its territories directly east across the South China Sea on North Borneo. In those days Indonesia had a strong navy with modern surface ships and submarines supplied by the Soviet Union. This is the most recent operation when a balanced Royal Navy task force with modern warships – aircraft carriers and commando carriers, cruisers, destroyers, frigates, minesweepers and patrol boats worked alongside a strong force of similar warships from the Royal Australian Navy and Royal New Zealand Navy. There were submarines but an order of battle is hard to find. Our nuclear attack submarines were brand new and still at the trials stage. The Ton class minesweepers also served as river patrol ships. Our Far East Fleet consisted of eighty warships of all sizes. With the help of the Australian and New Zealand navies, this deployment was managed comfortably for four years.

John Nott was Margaret Thatcher’s first defence minister—an  accountant by trade.  Along with George Osborne, he did more damage to the Royal Navy in modern times than any enemy and by a wide margin. Obsessed with Europe he thought all we needed were anti-submarine frigates to dash into the Greenland, Iceland, Norway gaps. Fortunately ex-sailor Jim Callaghan had ordered more destroyers and frigates to compensate for Denis Healey’s foolish scrapping of the only big carrier, HMS Ark Royal. A sensible new defence minister would have reversed that decision – but that would have required a person with knowledge of defence. Margaret Thatcher sacked Nott and replaced him with Michael Heseltine, a property dealer and publisher, but at least he’d served a few months as an officer in the Welsh Guards. Margaret Thatcher started rebuilding the navy after the losses from the South Atlantic – most caused by a total lack of Airborne Early Warning aircraft. There was another hard lesson: cheap surface ships don’t last long in fall scale warfare, hence the Type 23 destroyers replacing the cheap and cheerful Type 21s. The next gamble with our safety was the 1989 peace dividend which, of course, proved a silly illusion.

The Royal Navy survived Cameron, Clegg and Osborne by sacrificing over half its highly effective destroyer and frigate force (at a time when the Americans haven’t enough either) and half its nuclear attack submarine force. This kamikaze solution allowed the last four First Sea Lords to restore our aircraft carriers and long range strike fast jets while just about keeping alive vital skills and expertise through maintaining only the cores of all the other forces – anti-aircraft destroyers, anti-submarine frigates, the amphibious warfare force, minesweepers, nuclear attack submarines and the nuclear deterrent force. They learnt from Lord Trenchard who saved the Royal Air Force that way during the 1920s. But long range maritime patrol aircraft belonged to the RAF and were lost as that service fought for its own survival – thereby ignoring the most painful lesson from the South Atlantic War. More recently our navy has taken a torpedo called the financial crash and another called China’s virus. Recovery of a single albeit capital force after scuttling two thirds of our navy – during a brief and long-closed window of peace – has taken two decades but we don’t have the luxury of another decade for the restoration of our sea power.

The government must start today. Perhaps no one has told them – we live on islands. We need the oceans to survive and thrive.

What Should They Do?

Follow the Australians. Follow the US Navy which plans near enough to double its force of surface escorts, both manned vessels and drones.  Better still, follow their own country’s history during the 1930s when the naval vote increased by 50%.

When the French navy escorts illegal immigrants in rubber dinghy’s across the Dover Strait and even makes P & O ferries give way, we have turned the clock back over three-hundred years to when the Dutch burned our fleet in the River Medway. No amounts of computer nerds are going to put that right, only a strong balanced fleet. If you’re rightly alarmed by the shocking state of our defence forces, and want to know what the people of this country should insist any government does, a longer article is here.