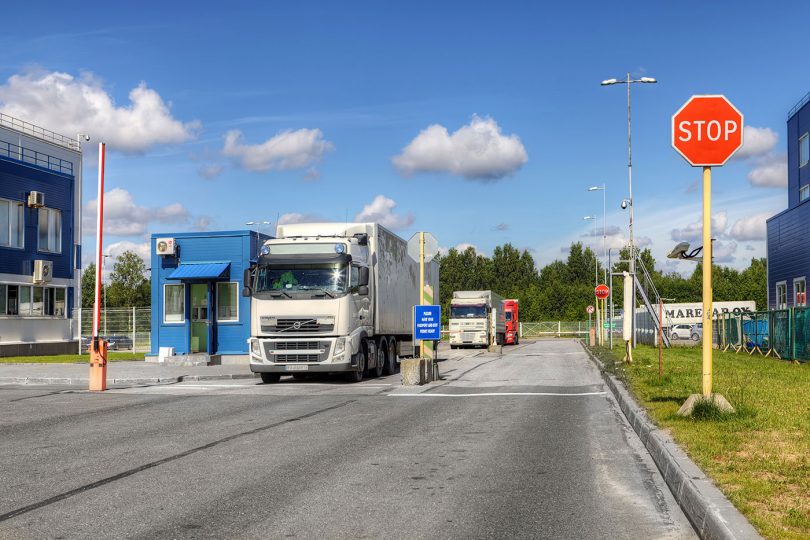 A senior private sector economist examines the reduction in trade costs due to tariff and non-tariff barriers over time and concludes that EU membership has had a limited impact. The general reduction in global tariffs and in transport costs has reduced the cost of trade. The benefits of the EU Single Market on trade are judged to be quite modest.The full report is on our REPORTS page.

Ahead of and following the UK’s referendum in 2016 on EU membership, there has been a lively debate about the costs and benefits of possible future trade arrangements between the UK and EU.

Much of the debate has revolved around estimates of the extent to which bilateral UK-EU trade has been boosted by EU membership. Many studies have examined this by using ‘gravity’ models which relate the degree to which one country trades with another to variables such as geographical distance and economic size, with a variety of other control variables (including language and historical links) usually added.

These studies have generated a number of striking claims:

The questionable nature of some of the results generated by gravity models has been shown by Gudgin and Coutts (2017), who suggest that estimates of trade creation due to EU membership have been greatly exaggerated. In this article, we also cast doubt on some of the key claims of the gravity model literature using estimates of bilateral trade barriers generated using trade and output data, following the approach of Novy (2011) and Springford (2017).

This approach attempts to estimate all bilateral trade costs, including tariff and non-tariff barriers and ‘natural’ costs related to geography and language and cultural barriers, between pairs of countries. The approach infers these costs from trade and output data in the pairs of countries and expresses the result as an ad valorem tariff equivalent. In other words, the measure used is the estimated additional average cost of buying a good or service from abroad relative to its cost from a domestic producer. For instance, the cost of buying goods from the EU6 is currently around 40% higher than for buying domestic goods.

Our key results are as follows: 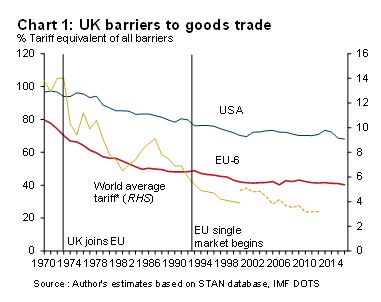 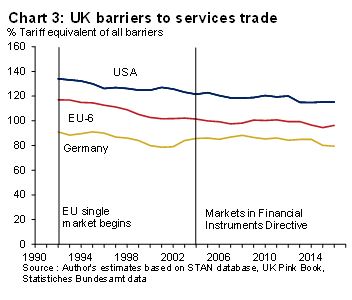 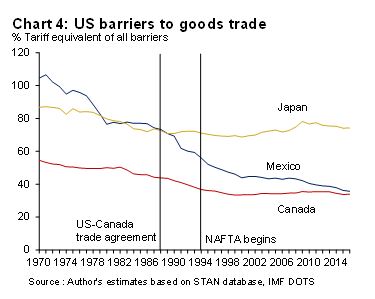 Overall our results suggest that differences between EU membership, single market membership (i.e. through the EEA arrangement), and free trade deals may be somewhat smaller than much of the Brexit-related literature suggests. The effects of the EU single market (which, importantly, also led to the abolition of routine customs checks within the EU) on goods trade barriers between the UK and EU-6 seem to have been relatively modest and hard to disentangle from globalisation effects.

For services trade, the effects appear to have been smaller still. So, while much attention in the UK currently focuses on the need for a future trade arrangement with the EU that has a significant services component, our analysis suggests this focus may be misplaced.