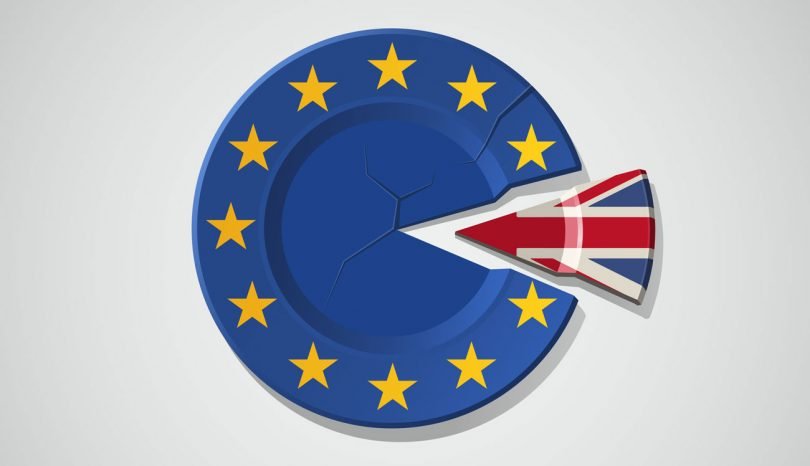 Harry Western shows that the EU’s anaemic economic growth has hobbled UK trade and manufacturing, while UK consumers have suffered by being forced though the EU customs union to buy overpriced EU products.

When the UK was considering joining the Common Market (the EU’s predecessor) in the 1960s and early 1970s, one of the key arguments deployed by proponents of such a move was that it would boost the UK economy by hitching the country’s fortunes to a dynamic region of the world where trade and productivity had grown rapidly since the 1950s.

That argument had some force at the time, on a backward-looking view. But exactly at the point that the UK joined the EU, the economic performance of the EU started to decline rapidly and this decline has gathered pace again since the early 2000s. 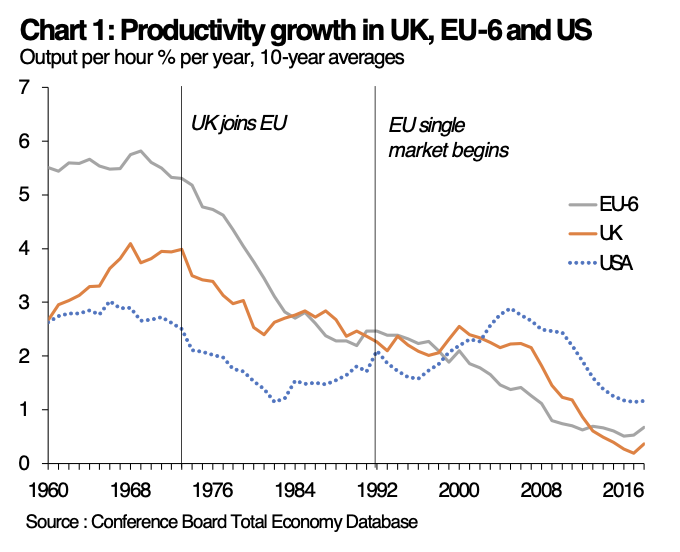 The EU’s dire productivity performance over recent decades has undermined one of the key planks of the economic case made for UK membership of the EU before 1973, which was that the UK would reap huge ‘dynamic’ benefits from being part of a rapidly-growing and productive trade bloc. Instead, the UK linked its trade and regulatory systems to a region moving into steep relative economic decline.

The extent to which the EU is now a drag on UK economic performance can be seen clearly in the area of foreign trade. Proponents of EU membership since the 1960s have argued that the EU offers the UK a buoyant ‘expanded home market’ for its products. But since 1998, UK exports to the EU have grown at a painfully slow pace. In the twenty years from 1998-2018, UK the volume of goods exports to the EU rose by just 23% or 1% per year, and from 2007 they have grown less than 3% – or a pitiful 0.3% per year (Chart 2). 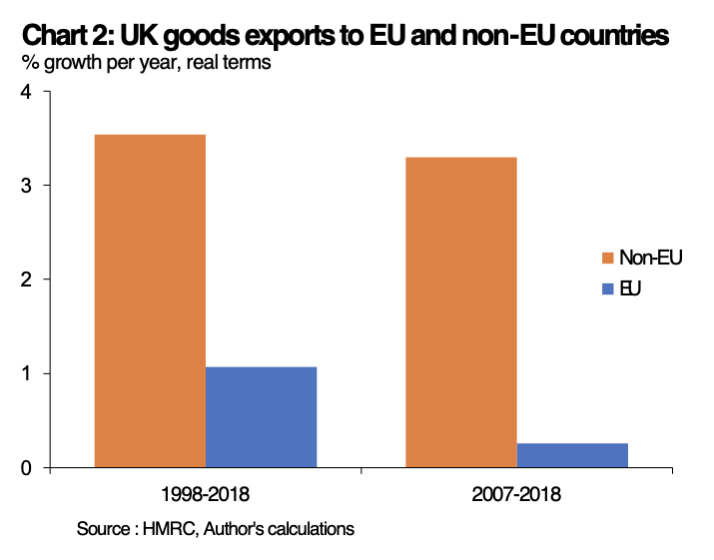 By contrast, UK exports to non-EU destinations have grown strongly, by around 3.5% per year since 1998 (almost four times faster than exports to the EU) and 3.3% per year since 2007 (thirteen times faster). This astonishing outperformance of non-EU exports has occurred despite the very advantageous terms UK exporters have for trading with the EU, and the existence of tariffs and other barriers to trade with non-EU countries.

The chronic weakness of exports to the EU has in turn severely hobbled the UK manufacturing sector. Proponents of EU membership argued the ‘expanded home market’ the EU offered would give UK manufacturing a big long-term boost through increased scale economies and specialisation, but instead the sector is in long-term stagnation.

Astonishingly, since 1990, the output of UK manufacturing has risen by just 3%, with output actually lower in 2018 than in 2000. Manufacturing, in accounting terms, has contributed essentially nothing to the 75% rise in UK GDP since 1990. By contrast, US real manufacturing output has doubled since 1990 (Chart 3). 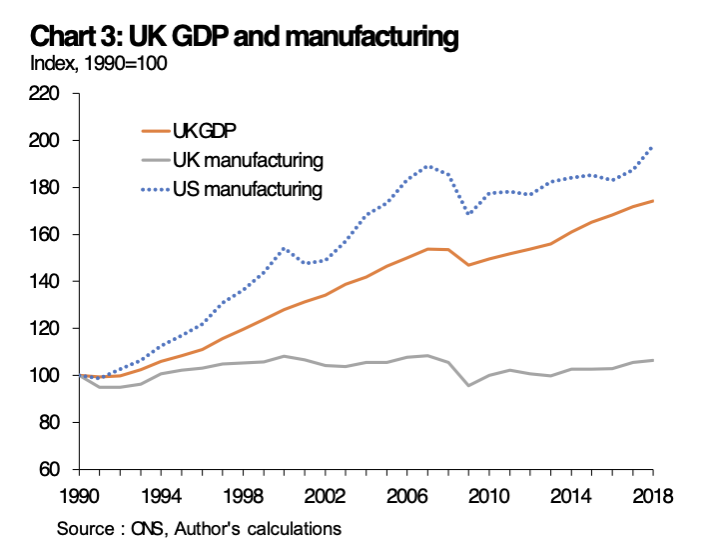 Things are not going to improve in the years ahead. The euro area accounted from 15-20% of world GDP growth from 1970-2000, slipping to just 8% in 2000-2017. Long-term economic forecasts by the OECD suggest that this low share will slip further, with the euro area contributing just 6% of world growth in 2017-2040 (Chart 4). Put another way, 94% of world growth in the next two decades will be outside the EU, along with the great majority of economic opportunities for the UK. 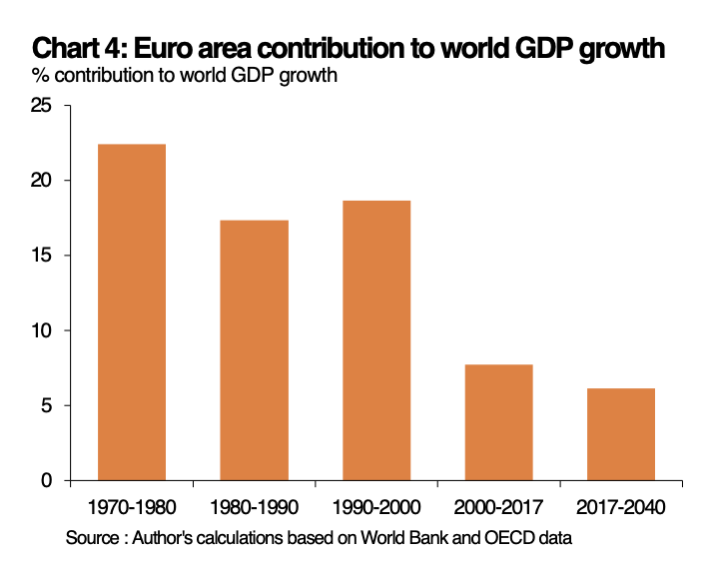 Against this background, the logical conclusion is that the UK should look to orient its economy away from the EU and more towards faster-growing parts of the world.

To some extent, this is already happening: the share of UK exports going to non-EU markets has risen to around 55% from 42% in the early 2000s. Strikingly, many key UK industries such as machinery, drinks and cars now send over 60% of their exports to non-EU countries (Chart 5).

But things could move faster if the UK reduced trade barriers with the rest of the world and reorganised its regulatory system, dropping many of the costly EU regulations that hold back UK businesses (these costs are estimated by the EU itself at as much as 4-6% of GDP) and adopting best practice systems in line with those of more dynamic economies. 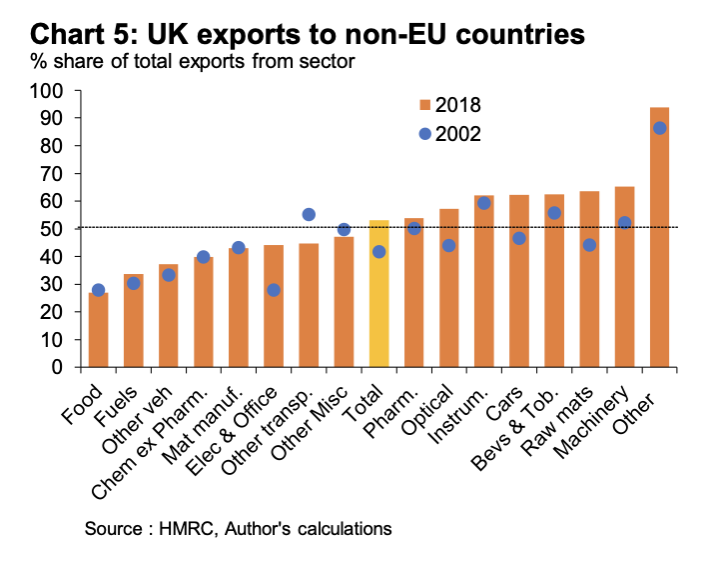 The gains from such a re-orientation could be substantial. As late as the mid-1980s the 12 largest EU economies combined were as big as the USA, but they are now 30% smaller (Chart 6). Had the UK had closer trade links with the US instead of the EU, it might have been able to capture some of that US economic outperformance. If UK productivity growth since 1999 had been 0.4% per year faster (i.e. half the difference between UK and US productivity growth per year since then), the UK economy today would be around 8% bigger – equivalent to a gain of £175 billion.

In a recent paper, economists at the Minnesota Fed reached a similar conclusion using more sophisticated techniques. They estimated that reducing trade and investment barriers with the rest of the world by 5% would raise UK welfare by £25-30 billion per year even with increased restrictions on trade and investment with the EU.

UK gains could be especially large in a few key sectors. In 2018, the UK ran a £95bn trade deficit with the EU, of which around 40% was just in food and cars. Both of these sectors have high tariffs against the rest of the world, which raise prices for UK consumers. Essentially, the EU customs union currently works to impoverish UK households by forcing them to buy expensive goods from the EU and from inefficient domestic producers. 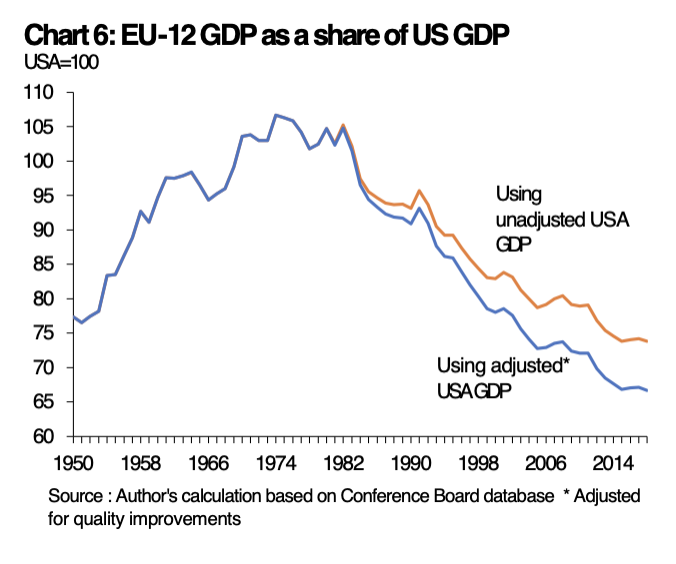 Overall, the above analysis shows clearly that the EU has, over the last two decades, failed to provide the kinds of benefits that proponents of EU membership promised from the 1960s onwards. The EU’s anaemic GDP and productivity growth has hobbled UK trade and manufacturing, while UK consumers have suffered by being forced though the EU customs union to buy overpriced EU products.

On top of this, the UK has of course made substantial net fiscal transfers to the EU, currently running at around £10bn a year. This is not the deal promised in the 1960s, and any future deal that preserves these negative aspects of EU membership will indeed be a ‘bad deal’.