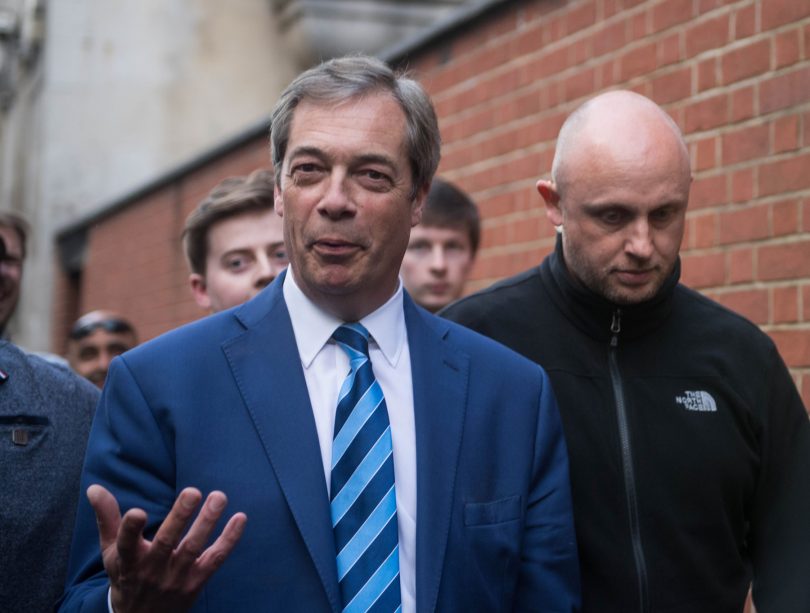 I don’t really like the man. I believe that he is guilty of hypocrisy. Of telling the odd porky pie, if not directly, then through the sin of omission. Of preying on voters’ fears. Of fanning the flames of bigotry that lie in most of us. Of appealing to people’s lesser instincts. Yes, I am suspicious of his motives. Yet my misgivings could be applied to many of the politicians campaigning for our vote.

A leading politician being hypocritical? Look no further than the current leaders of Change UK. They demand a re-run of a referendum; yet won’t stand for re-election themselves despite changing the colour of the rosette they ran under, and reneging on their manifesto promises.

Or telling the odd porky pie? I give you the current PM. Mrs May promised over 100 times to leave the EU on March 29. Yet here we still are. Or how about most MPs? They ran on an election promise to ‘Leave’ and approved Article 50. Then they voted against the withdrawal agreement. Or the Lib Dems? Student loans anyone?

Preying on voter’s fears? Like Remainers telling us that the minute we voted to Leave, there would be a “catastrophic shock” to our economy, with a huge rise in unemployment and an immediate recession? Yet here we are. The lowest unemployment levels in recent history and not one quarter in recession.

Appealing to our lesser instincts? How about Momentum? To quote a Labour Councillor, they use “sexism, bullying and undemocratic behaviour” to intimidate people. Or publish the names of 50 Labour MPs who are “traitors to the cause”.

Churchill has been accused of being a racist war monger. Thatcher of emasculating the miners. Blair of being a war criminal. Corbyn of being an apologist for terrorists. May for being a confidant of tyrants.

The reality is that most of the political class of today and yesterday have been guilty of the sort of behaviour that Nigel Farage is accused of. Equally, if a candidate or a party is to be held guilty by association because some supporters are racist; then we must exclude every Party that has accepted the votes of pedophiles, rapists and violent criminals. That might be a blessing in disguise, as every Party would probably be disqualified.

Democracy is not limited to angels. Good people do bad things, just as bad people do good things. Universal suffrage gives us all a vote, and the right to run for political office. Farage is the UK’s poster boy for the dose of Epsom salts that we plebeians feel should be prescribed to the Palace of Westminster and the Chateau of the EU.

Which is why the political class, huddling behind the ramparts and portcullises on The Thames, or commissioning in Brussels, have been joined by the establishment, the fourth estate and academia (of whom nearly 70% are self-confessed ‘left wing progressives’), to mount a classic political assassination on the man they fear more than any other threatens their dominion.

They have declared war on populism. In a classic case of “pot calling the kettle black”, they want to decapitate its cheerleader through naked character assassination. (If Farage wrote that it would be held up as further evidence of his racist undertones). Which suggests that the political class and their acolytes have forgotten that the word ‘democracy’ comes from demos, Greek for “common people” and kratos, “strength”; and that populism is defined as “a political approach that strives to appeal to ordinary people who feel that their concerns are disregarded by established elite groups”.

Yes, Farage may not be an angel. He is however in good company. His assassins are fellow antonyms of virtue. For alas hypocrisy, dishonesty, fear mongering, bigotry and self-serving machinations are the baggage that most politicians have carried around for time immemorial.

Populists. Ordinary people. The common folk. We all recognize Farage for what he is; a politician. But he is our politician. The establishment have been warned. Martyrs make very powerful and effective champions.