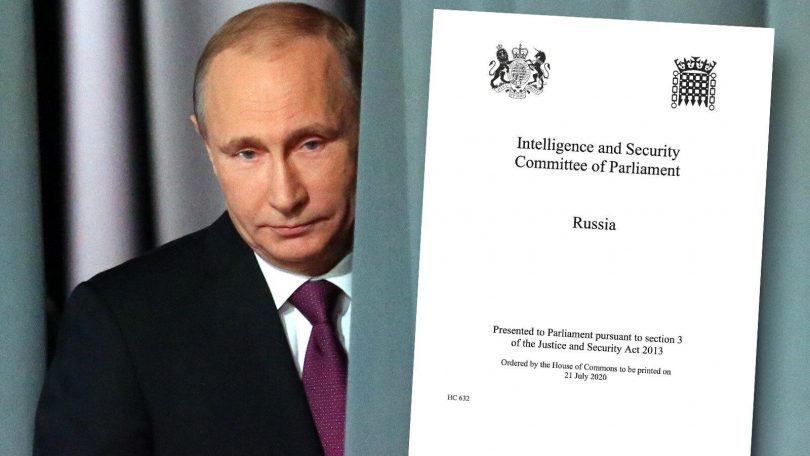 Gwythian Prins praises aspects of the ISC report but says that listening to the debate one might have thought that undermining the Brexit referendum was the main point of the report.

In 1871 Sir Edward Burnett Tylor, the founder of the discipline of cultural anthropology (who later because the first professor of anthropology at the University of Oxford), asked and answered a simple question. Why, he wondered in his seminal book Primitive Culture, do people go on believing in witch-doctors when manifestly their spells and potions do not work?

His answer was that when people inhabit an encapsulated belief system, such as witch-doctors do, it is always possible to find omissions in performance which explain the failure of cures or predictions while at the same time preserving the belief system intact. Your illness did not abate? Was the sacrificed cockerel completely white? Was the moon completely full? Was the incantation accurately recited? Was the virgin who dipped the tail-feather in the blood really a virgin? One of these was not? Ah, well, there you are, then.  A century later the British moral philosopher John Skorupski named such performance failures ‘blocks to falsifiability’ which preserve the self-sealing integrity of strongly encapsulated belief systems.

Tylor, Skorupski and blocks to falsifiability should be to the front of our minds as we make sense of the peculiar reportage of the publication of the delayed ‘Russia report.’ This reportage was led by the BBC but initiated by the SNP and Labour members of the House of Commons Intelligence & Security Committee in presenting the document on 21 July.

What the report actually said was both troubling and reassuring. On the one hand, it documented the extent to which, under Baroness Manningham-Buller’s leadership during the Blair years, from 2001 – 2007, MI5 heavily diverted resources away from domestic subversion initiated by hostile state action, as by Russia, to Islamist terrorism in the aftermath of the 9/11 attacks, whereas maintenance of aim on both targets had been required. On the other, it commended the partial recovery of MI5 capability by 2014 and praised the effectiveness of response to the Salisbury poisonings in 2018 (¶ 96), urging that this must not be a ‘high water mark’. Overall, the report was dark. It documented a consistent pattern of hostile action by Putin’s Russia, to which, in assent and in its response to the report, the Government added that it had positive evidence of Russian attempts this month to steal Covid-19 candidate vaccine data, and that, “the Committee will also be aware that following extensive analysis, the Government has concluded that it is almost certain that Russian actors sought to interfere in the 2019 General Election through the online amplification of illicitly acquired and leaked Government documents.” These were the documents that Jeremy Corbyn chose to publicise. It added significantly that, “there is an ongoing criminal investigation and it would be inappropriate for us to say anything further at this point.”

The ISC report made a range of sensible recommendations about co-ordination with internet ‘social media’ providers (¶ 35), on illicit funding and money-laundering through the ‘London laundromat’ (¶50) and it raised concerns about the evident eagerness of certain PR companies, charities, academia and in particular (¶54) members of the House of Lords, to accept Russian money and gifts. In ¶117 the ISC called for revision of the Official Secrets Acts, which it deemed to be no longer fit for purpose, to which the Government replied with assurance of necessary actions, as also with legislation for Foreign Agent Registration on the (implicitly) American model. Then, in two references – a footnote and at ¶47 – the report mentioned Brexit and the 2016 referendum.

To listen to the SNP Member Stuart Hosie and the Labour Member Kevan Jones introducing the report one might think that this was the biggest issue in the whole exercise. That view was amplified with the clattering of their bones by the ‘remainer undead’ as Robert Tombs has now so aptly named them, which then ensued across the BBC airwaves where Lord Ricketts, the first National Security Adviser and prominently consistent remainer, took the lead – and in the pages of the remainer press.

Within their encapsulated belief system, the Remainer Undead had convinced themselves that the report would provide them with evidence that the Russkies had funded the Leave vote making it possible to declare it invalid. Thus, even at this last moment and against all real world evidence, it would offer them a chance, still, to disqualify the result. In this encapsulated bubble, why else would Demonic Cummings and Lying Boris have delayed publication? But the ISC report offered no such comfort, beyond calling (¶47) for an enquiry. Recall that the report was drafted under the chairmanship of Dominic Grieve at a time when he was displaying advanced symptoms of Brexit Derangement Syndrome.

On this matter the Government comment deserves to be reproduced in full:

We have seen no evidence of successful interference in the EU Referendum.  The Intelligence and Security Agencies produce and contribute to regular assessments of the threat posed by Hostile State Activity, including around potential interference in UK democratic processes. We keep such assessments under review and, where necessary, update them in response to new intelligence, including during democratic events such as elections and referendums. Where new information emerges, the Government will always consider the most appropriate use of any intelligence it develops or receives, including whether it is appropriate to make this public. Given this long-standing approach, a retrospective assessment of the EU Referendum is not necessary.

This reply makes an implicit point that needs to be noticed, as well as its two explicit statements. The implicit point is about the nature of secret intelligence.  Quite properly the report is peppered with redactions, for it is in the nature of the foreign secret intelligence service’s product that, if fully exposed, it may reveal clues to its agent assets; and that is why Chiefs have resolutely refused to release such papers to the oversight committee. When Sir Malcolm Rifkind pushed to enlarge the ISC’s powers he was firmly rebuffed. Recall that the origin of the ISC lay in a bargain struck over this dynamic tension when MI6 needed enhanced powers in the 1990s and in return conceded the creation of the ISC under the Intelligence Services Act 1994.

Therefore, as stated, Government has – of course – received regular briefing on foreign interference in British elections and referenda. Indeed, it confirms suspicions about Russia in respect of the 2019 General Election; and the report mentions evidence of Russian attempts to support the Scottish Nationalists in the 2014 Referendum.  As a hostile state, Russian interest in getting Mr Corbyn into No 10 or in splitting the Union is self-evident. Yet in the case of the EU referendum, the Government reports that “we have seen no evidence of successful interference” and there is no good reason to disbelieve it.

Among remainers, there is an unquestioned assumption that Putin’s interest would have been to back Brexit. But in terms of objective power politics, that is perverse. If the Russians were going to support anyone, then it would surely have been the ‘remain’ side because a Great Britain hobbled by and bled by the failing EU experiment is a weaker and more compromised Britain. The Kremlin would, by far, prefer that to the renewed and reinvigorated country under new management that we now are. Furthermore – and this the Report does specify – the very institutions which it identifies as being eager for Russian money (PR companies, charities, universities etc) are exactly the habitat of the most unreconciled remainers. Therefore, I read the careful drafting of that sentence in that way. I would guess that this is what the redacted or withheld intelligence probably says.

But for Mr Hosie most especially, and for Mr Jones, I don’t think that this has crossed their minds. No, for them, inside a bubble of encapsulated belief, it is obvious that there has been a performance failure. The Government has seen no evidence of Vladimir’s heavies and of Moscow gold buying the thick, hard northerners or the soft furnishings in ‘Vote Leave’ HQ? Well, said Mr Hosie, this isn’t because it isn’t there. It’s because it hasn’t been found; and why has it not been found? Because this hated prime minister and his ‘Vote Leave’ crew chose not to look for it.  It is a classic block to falsifiability. Sir Edward would that you were alive at this hour! The Intelligence and Security Committee “Russia Report” must have come as a great disappointment to the Remainer Undead.

The “Russia report” has been released at just the moment when the wider political class finds that it can no longer sustain its courtship of the other great dictatorship, the one to which the Communist Mandate of Heaven moved after the collapse of the USSR. Not before time, the shape of the Free World’s simultaneous Cold Wars with two hostile states, a nationalist Russia under KGB management and the Communist leadership of China, looms before us. Just in time also to validate the major transformations and upgrades across the board which the imminent strategic and defence review will, I hope, propose.

And what of the remainer undead? The illogical ferocity of their millenarian dogmas, focussed upon an EU that does not exist now, if ever it did, may perhaps, in part, be explained as Norman Cohn explained millenarian cults which historically have blossomed during and after plague. But at a less elevated level of analysis, their day is done. It was splendidly explained in a reader’s comment appended to a Spectator article:

It takes a rare self-obsession and idiocy to convince oneself that the only reason some bloke ‘up north’ could possibly vote against the sage advice of some shrill north London geography teacher is because Dmitri in St Petersburg has manipulated him into doing so.

But, I don’t want them to ever stop. To a remarkable extent they are the same people destroying our civil service, judiciary, media and universities. When your enemy constantly stands up on the battlefield and says ‘here I am’ it is not a behaviour one should seek to discourage.