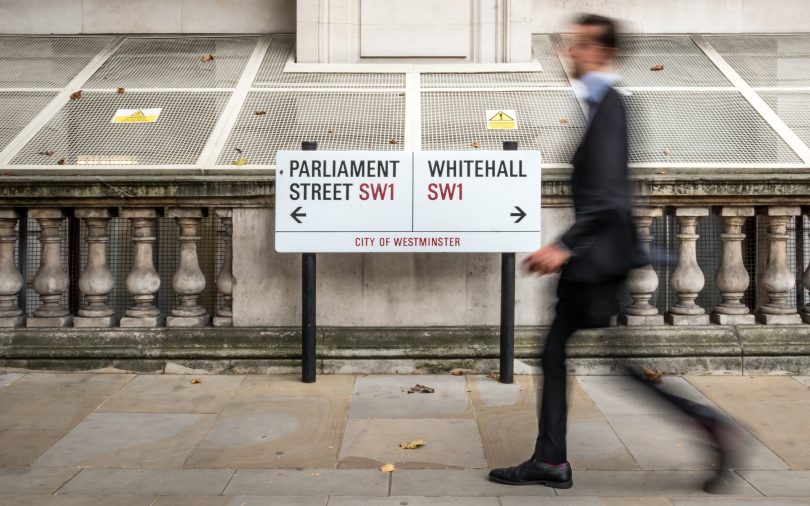 Talk to civil servants about Brexit as the ultimate disruption and they mobilise for damage limitation. They are trained to see risk and cost, not opportunity and alternatives.

One of the many idiosyncrasies new Ministers must get used to on arrival in a Government Department is the constant passive voice. Their officials are servants of the state, cogs in the machine, and as such their personal agency is less important than the authority of their ‘grade’ or rank. For politicians this can be opaque and infuriating, particularly the overuse of metonyms. Private Secretaries for some Ministers have learnt not to say or write “The Treasury has refused” or “Number 10 has asked”, and now pre-empt the polite query or scrawl in the margin of a submission*: “Who in Number 10?”

But politicians are also guilty of ascribing agency to metonyms. In what way, precisely, can the Civil Service be ‘Remain’? Is it?

It is very likely (though difficult to prove conclusively) that more than 52% of the 330,000 civil servants voted to remain, and significantly more: the characteristics of this workforce are an almost direct match for the characteristics of the remain vote.  Of those working directly with Ministers and in the main Whitehall Departments of State (HM Treasury, Cabinet Office, DEXEU, DIT, BEIS, FCO), the percentage of Brexiteers is probably negligible. This is a London-dwelling, graduate, high-earning, cohort.

This makes the majority of officials working on Brexit ideological Remainers, but this does not entail that their actions are consciously ideological. Politicians find it hard to accept that public servants enjoy – and take very seriously– their impartiality and service to democracy. For most civil servants being accused of partiality or lack of objectivity is an affront to their amour propre, akin to the way a politician or special adviser would feel if accused of corruption. There are Two Cultures in Whitehall/Westminster, and they find each other baffling.

However, even if we can’t prove a conscious Remain ideology in the civil service, we do know enough from behavioural science that what people do is governed by what they believe, and this unconscious bias is harder to deny. In the same way that ‘despite Brexit’ has become a revealing indicator of Remain support in the media, many of the leaked government papers purporting to be neutral are similarly revealing in tone and underlying assumptions. The authors inadvertently but obviously reveal that they see their role as minimising the inevitable harm of an act of self-destruction, not maximising the possibilities of a disruption to the status quo. This makes them ‘Professional Remainers’ in the Tombs Taxonomy, but not in the same way as the CBI or other lobbyists.

It’s the verb ‘disruption’ that reveals more about the shared attitudes and behaviour of civil servants. In the public sector disruption is NEVER positive. Disruption in public transport means chaotic timetables and furious passengers. Disruption in schools means children can’t learn, in hospitals it means people aren’t treated. Disruption in prisons means lives at risk. For civil servants ‘minimising inevitable harm’ is a job description, with ‘any disruption to the status quo’ being inevitable harm. This predates any activity to leave the European Union. For proof, read any National Audit Office report or Public Accounts Committee Inquiry into a new policy. The cost of the change is emphasised and measured; the opportunity cost of no change rarely mentioned.

Public sector procurement is a good illustration. Commissioners in Whitehall and elsewhere in the civil service are ground down by the horror of procurement according to EU prescription: state aid rules, gold-plated OJEU (Official Journal of the EU) processes.  The collapse of Carillion, and emerging findings from the Grenfell Tower inquiry, will necessitate a different, better, system. For this, Brexit is perfect timing. Why aren’t Ministers surprised and delighted by unprompted advice in pithy submissions, explaining how and when we can take back control of public sector procurement? They are not, but not because of ideological or professional bias in the civil service: any small improvement to the current procurement process would make the lives of commissioners vastly better, and likely increase their budgets. And not because of fear or worry about change: most commissioners would find it hard to imagine a less effective or efficient process than the status quo.

Civil servants are not writing these unprompted papers because they only know to respond to a request, not to pre-empt one. Any small change to the way things have always been done means assuming agency and accountability, and therein some personal and professional risk.

After 2010 this loss was exacerbated by clumsily implemented budget cuts, which allowed the most experienced to take voluntary redundancy, and reduced investment in training and professional development. Investment (both money and senior time and energy) in the Fast Stream, which had always been a globally renowned training programme, was also reduced, with a direct impact on quality and retention*.

Until these fundamental weaknesses within the civil service structures are admitted and addressed it is unlikely that something of the complexity of Brexit is going to be completed well. Until Whitehall is disrupted it’s unfair to expect the people working within it to disrupt anything else.

Pamela Dow was formerly director of strategy at the Ministry of Justice, and is now chief reform officer, Catch22

*‘Submissions’ are the fuel of the Whitehall machine: papers drafted by officials which seek to inform, explain or persuade those with decision-making authority, usually Ministers. So named for the act of presentation, the alternative definition of yielding to a superior force has occurred to many Minsters faced with 20 or more long papers in their Red Box every evening. This process of accountable policy-making would be recognisable to any politician or civil servant of the last 100 years. Private Secretaries may now email the advice and their Minister’s response but the form remains the same. Every now and then a Minister will rebel and issue an edict: for brevity, clarity, precision, or greater creativity of medium, but small improvements are short lived. A tractor doesn’t become a Tesla by dropping a few batteries into the tank. Many officials also hate the process and recognise its faults but, until another means of guaranteeing the ‘paper trail’ is designed and adopted, they and their Ministers are doomed to submission

* The priority given to ‘Civil Service Reform’ is clear in the constant change in leadership over the last few years; leading that agenda and eponymous Cabinet Office team is awarded to anyone who needs a few months’ break between more important and glamorous assignments.