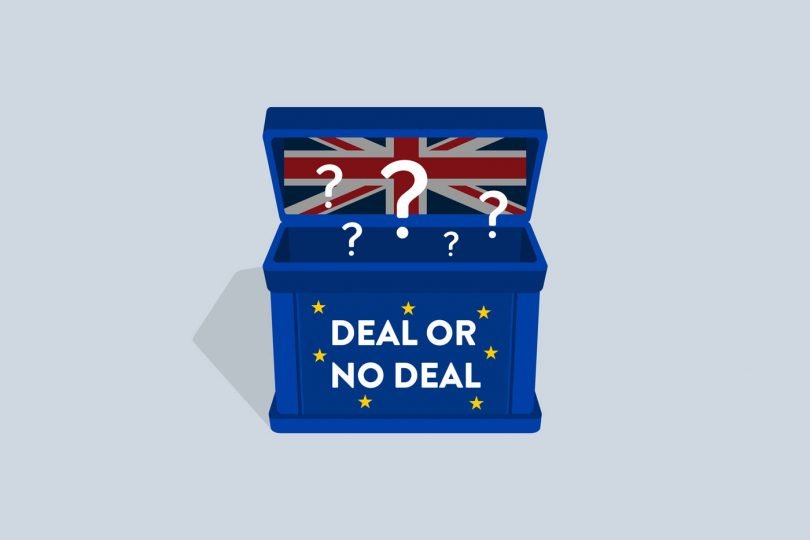 Those MP’s supporting Parliamentary efforts to prevent a ‘No deal’ Brexit largely avoid talking about democracy, independence, and sovereignty, where they are on weak ground. Instead they focus on the “catastrophic” economic damage they expect the UK to suffer if it leaves without a deal. But here too all the evidence suggests they are on equally weak ground

Firstly, we need to stress that the very phrase ‘No Deal’ is a complete misnomer. There are already a series of mini deals in place – on issues such as trade facilitation, air travel, citizen’s rights, students, transport, security, – that would take effect in the event of no overarching deal. More would eventuate as events move in that direction.

Furthermore, after a slow start – understandable when building from scratch – the Department of Trade has now rolled over 63% by value of the EU’s Free Trade Agreements (FTA’s). It has also signed Mutual Recognition Agreements with the USA, Australia, and New Zealand (The EU has no FTA’s with these countries). Critically, these new agreements also apply in the event of ‘No deal’, and in most cases include commitments for further development after Brexit. All of these mini-deals and trade agreements will help mitigate any short term disruption and adjustment problems in the event of ‘No Deal’.

That said, this article focuses on the long term economic impact of a ‘No Deal’ Brexit, which these MP’s claim would be so damaging. It is a remarkable feature of the debate how threadbare the economic arguments they use are, and how little evidence is offered in their favour. They will offer anecdotal stories about what this or that business has told them, but this is evidence of strong corporate lobbying rather than economic evidence. In

and when we will leave is more damaging than how we leave.

The only real ‘evidence’ offered is the UK Treasury’s absurdly negative forecasts about the economic impact of ‘No Deal’. They ignore the fact that the Treasury has been hopelessly wrong in many of its key forecasts, including: failing to see that “crashing out” of the ERM in the early 1990’s would set off a major economic recovery; predicting that failure to join the Euro would be a disaster; being caught completely off guard by the 2008 Global crash; and most recently forecasting that the mere act of Voting Leave would cause a recession.

Even the best economic models are only as good as the assumptions fed into them. It is clear that the UK Treasury’s institutional pro-EU attitude leads them to input ridiculously negative assumptions into their Brexit forecasts. Dr Graham Gudgin, co-founder of this website, has examined this issue in forensic detail in previous articles (see for example “Is HM Treasury the Enemy of Brexit?”), as has Professor Patrick Minford for Economists for Free Trade.

The Treasury forecasts that a ‘No deal’ Brexit would result in the UK’s GDP in 2030 being 7.7% lower than it otherwise would be. The bulk of this fall – 6.8%

– results from the forecast of very large contraction in UK-EU trade, due to the imposition of tariff and non-tariff barriers and to much higher customs costs. Altogether these additional costs are assumed to be equivalent to the effect of an overall tariff on trade of 30.6% – called the Total Tariff Equivalent (TTE). This assumption is patently ridiculous. It is estimated that currently the TTE for the EU’s trade barriers against the US and Japan is 20%, yet it is assumed the UK will face barriers one and a half times higher than this, in spite of the UK starting off with complete regulatory equivalence with the EU! This could only happen if the EU chose to massively discriminate against the UK – something clearly illegal under WTO rules. How can the UK Treasury put an assumption of a gross illegality persisting for many years into a baseline forecast?

If we drill a bit deeper, one of the components of this enormous rise in

EU-UK trade barriers is that additional customs costs would amount to 5.8%

of the value of goods traded. Recent independent studies show such customs costs to be far lower than this – typically now less than 1% – and also on a falling trend as new electronic procedures increase efficiency. The Treasury forecast thus appears to exaggerate any customs cost increases from a WTO Brexit by a factor of perhaps four or five times. In pursuit of a political agenda the UK Treasury has sadly damaged its credibility.

The Treasury forecast compounds their grotesque pessimism on UK-EU trade by also assuming that the Free Trade Agreements (FTAs) that the UK will achieve with non-EU countries after Brexit will have virtually no impact on UK GDP! Specifically, they forecast only a 0.2 increase in GDP following from an FTA with the US, and take no account of possible FTAs with any other countries. These forecasts are an insult to our intelligence and common sense. A 2017 study by CIE (Centre for International Economics, Australia) showed that the trade liberalisation programme undertaken by Australia since 1986 – roughly equivalent in nature to what will be possible for the UK post-Brexit – has boosted Australian GDP by 5.4%. The UK is at present part of a highly protectionist bloc with an estimated 20% tariff and non-tariff barrier between itself and the rest of the world. Once free to pursue an independent trade policy there is therefore huge scope to promote trade through liberalisation. A gain to GDP along the lines achieved by Australia is eminently possible.

So the Treasury achieve their goal of making ‘No Deal’ look terrifying by greatly exaggerating the likely loss of trade with the EU and greatly underestimating the gains to trade with the rest of the world (ROW).

Another way of assessing the implausibility of this analysis is to look at the relative growth rates and size of the EU and the ROW. The following tables will help us do this: 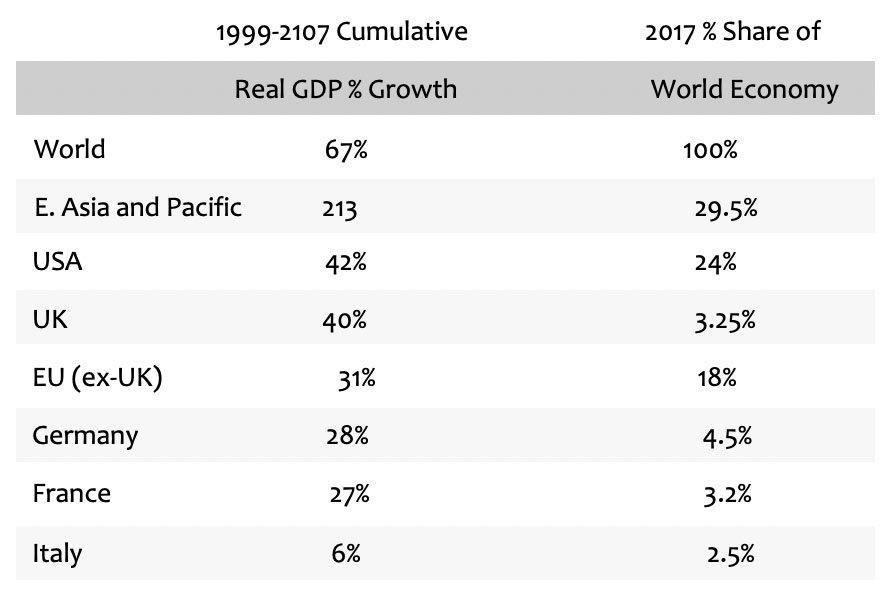 By leaving the EU the UK is loosening its ties with a relatively slow growing trade bloc – one that is likely to grow even more slowly in the future given its mounting economic, social, and political problems. Note that Italy has hardly grown at all in nearly twenty years, and has actually got poorer in per capita terms. One has to question the sustainability, and dare one say the morality, of an economic union that has fostered such a gross discrepancy in performance – a discrepancy which is nearly as bad in Spain and Portugal and a great deal worse in Greece. At the same time, by regaining an independent trade policy, the UK will over time greatly strengthen its economic ties with the fastest growing parts of the world- economies which are in total much larger than the EU. The US alone is markedly larger

– in current US$ terms – than the EU (excluding the UK). How can an FTA with the US only increase UK GDP by 0.2% while looser ties with the smaller and slower growing EU reduce GDP by 6.8%? This difference in growth effects seems wildly disproportionate, even after allowing for the much shorter distance between the UK and EU markets compared to the US market.

‘No Deal’ pessimists extol the mystical virtues of the customs union and the single market, which they believe are so great that withdrawing from them produces this calamitous effect on UK GDP. However, there is no evidence that these virtues exist, as can be shown by a look at UK trade statistics. If being in the single market and customs union was so beneficial, why does the UK have an enormous and growing trade deficit with the EU? In 1999 we had a trade deficit of £11.8 bn with the EU, which by last year had grown to a

The fact is that the UK is structured very differently from the EU, being a much more services dominated economy and generally more advanced in new and high tech industries. The UK only has one vote out of 28 and the trade deals, tariff structures, and regulations of the EU are generally

ill-suited to our economy. It is therefore no great mystery that we receive little or no benefit from being in the EU structures. Even the highly Europhile FT journalist, Wolfgang Munchau, was forced to concede this, writing that the Single Market “is not visible in the macro statistics…the data are telling us a different story – that the Single Market is a giant economic non-event, for both the EU and the UK”

If only the bulk of MP’s would listen, and look at the evidence, they would stop frightening themselves and the voters and release the UK from an unnecessary constitutional crisis.