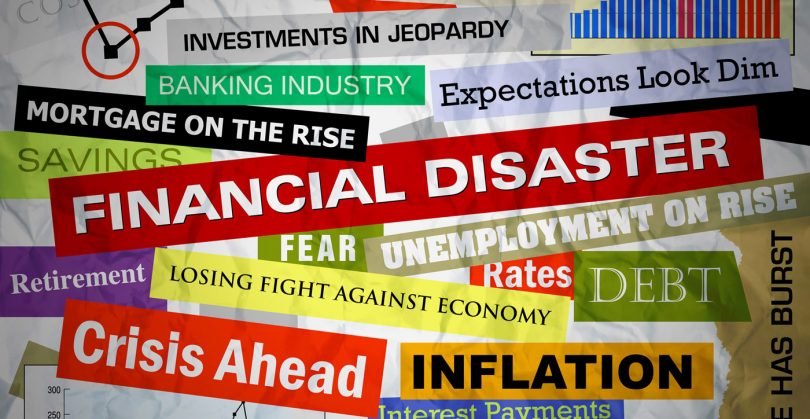 A Centre For European Reform report concluded that ‘The UK economy is 2.5% smaller than it would have been if the UK had voted to remain in the European Union. Dr Graham Gudgin shows in detail how the CER reached their conclusion and why it is likely to be wrong.

At the end of September the Centre For European Reform (CER) published a widely reported analysis of the impact that Brexit was already having on the UK economy[i]. This independent thinktank, supported by corporate donations from multinational companies, reported that:

‘The UK economy is 2.5% smaller than it would have been if the UK had voted to remain in the European Union….the damage is growing although the UK is yet to leave the EU. The knock on hit to the public finances is now £26 billion per annum or £500 million a week’

To inform BfB readers, we explain below precisely how the CER reached these conclusions and how much reliance we should place on them. Our aim is to be fully informed about Brexit and its impact and prospects and to avoid kneejerk acceptance or rejection of arguments from what ever source. In particular we accept Michael Gove’s injunction to avoid taking on trust projections from what he called ‘organisations with acronyms’. Michael Gove had in mind H M Treasury, Bank of England, the OECD or IMF, but the list might just as easily be extended to include independent organisations like the CER.

The CER’s method was as follows. The UK’s growth in GDP was compared with a group of countries whose growth record had been similar to that of the UK in the run-up to the referendum. Growth was then compared with the same countries  over the two year period from the second quarter of 2016 (2016q2) to the second quarter of 2018 (2018q2). The comparator countries were largely the USA and Germany but also included Luxemburg, Iceland and Greece. These countries were selected by a computer programme rather than by human judgement and included those countries which were most similar to the UK in their GDP growth record from 2009 up to the referendum.

The CER concluded that growth in the UK had fallen behind this group of ‘doppelganger’ economies particularly from early 2017, having previously kept pace with them prior to the referendum By the middle of 2018 the cumulative shortfall was calculated as 2.5%. 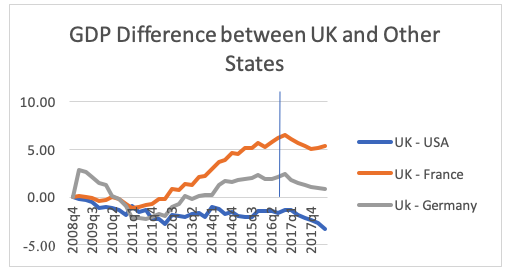 This is a simple and intuitive approach but lets look more closely at what is going on. The charts above and below show the cumulated difference in GDP growth between the UK and several large comparator countries including the CER’s USA and Germany. We have excluded Luxemburg (a tax haven), and Greece and Iceland (both badly damaged by the banking collapse) as being small and not being particularly relevant to the UK.

For instance, in the comparison with France in the chart above, the UK initially  lagged a little in GDP growth until mid-2011 but then easily outperformed France until early 2017 by which time it was 6% ahead of France. The UK’s growth then fell behind France during 2017 but in 2018 the UK is once again growing faster.

The above chart shows that a somewhat similar pattern is shown in comparisons with the US and Germany. In each case the UK did a less well for a year or so after the 2009 banking-crash recession, but then picked up and did as well or better than these countries until early 2017. In each case the pick-up ceases in early 2017.

It this failure for the UK to keep up with comparator countries in 2017 that the CER blames on Brexit. Note that there is no consistent trend over the whole pre-referendum period that can be extrapolated. It is essentially the trend over the period from the beginning of 2013 to mid-2016 that forms the counter-factual. This was a good period for UK growth partly covering the run-up to the 2015 election. We can regard it as a cyclical upswing in the UK economy and legitimately ask how long this upswing might have lasted whether the referendum had occurred or not.

The CER assumption is that a few months after the referendum consumers and firms began to spend less than they would have done in the absence of the referendum. They also assume that slower growth will continue in future.

Any conclusion drawn from this type of comparison obviously depends on which comparator countries are chosen. If we were to choose three other major countries, shown in chart below, the conclusion might be different.

In the comparison with Spain for instance the UK outperforms Spain until mid-2014 when Spain starts to recover from the post-banking-crisis doldrums. There is no sign that the subsequent trend changes after the referendum. The post-referendum downturn in the UK is also less obvious in comparisons with Italy and Japan, although in both cases the UK lags growth advantage does seem to slacken from early 2017.

There is thus something of a prima-facie case that UK growth failed to fully keep up with other major countries from early 2017. The CER assume that this must be due to Brexit, but this is not necessary the case. As long as economic cycles are not fully aligned, there will be some periods when the UK grows faster than other major economies and others when UK growth is slower.

The CER’s evidence shows that the UK was doing as well or better than the USA and major EU countries from early-2013 to early 2017 but has then slowed. To draw any implications for Brexit, one would need to argue that the change in 2017 could not have been a normal cyclical fluctuation and the CER has not done this. They make no attempt to speculate on whether UK consumer spending growth would have slackened from its rapid pace in 2015-16 under the weight of increased consumer debt and some tightening of consumer credit by banks. Nor do they make allowance for the major fiscal stimulus in the USA under President Trump which inevitably leads the USA to grow faster than the UK but has nothing to do with Brexit.

Another way of approaching the question of whether Brexit has stalled economic growth in the UK is to focus on the UK itself. Using our own CBR macro-economic model of the UK we have compare actual growth in GDP since 2016 with what we project would have happened if the referendum had been lost. One thing we can be confident of is that the referendum led to an immediate and sustained fall in the value of sterling by around 15%. Another is that confidence was affected by the referendum, and we have been able to estimate the size of these confidence effects because we now have data for 2017 and early 2018. In practice the main confidence impact seems to have come through business destocking, i.e. some firms sold from existing stocks rather than producing directly for sale. There is also some evidence of a lower level of house building and a small reduction in migration into the UK.

If we assume that these changes would not have happened in the absence of the referendum we can easily generate a ‘non-referendum’ counterfactual prediction for GDP. When we do this, we find only a tiny reduction in GDP due to Brexit. What seems to have happened is that the boost from a depreciation in sterling has offset the mildly negative confidence effects.

Our conclusion is that the majority of the 2.5% Brexit hit to GDP estimated by the CER was in fact a normal cyclical downturn in the UK economy. This occurred when other major countries, including the USA were experiencing accelerated growth. It is thus wrong in our view to simply ascribe to Brexit difference in growth between the UK and other major economies.