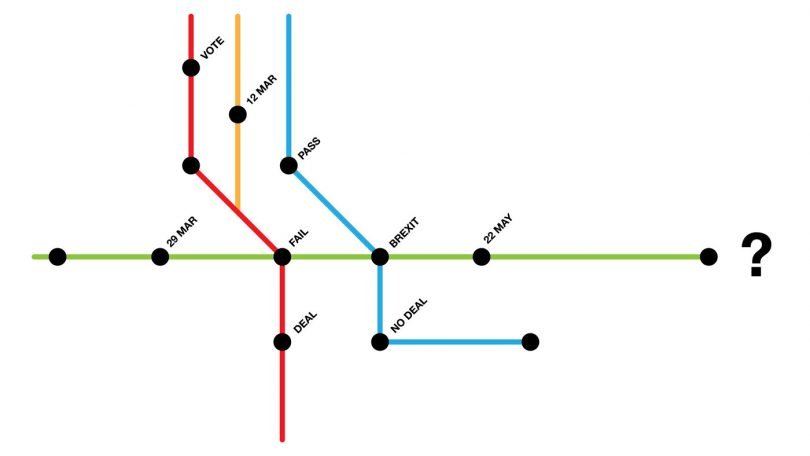 In the first of what BfB plans to be a series of analyses of our political crisis, Jonathan Rutherford focuses on the breakdown of our political system which has created an ‘interregnum’ which must be resolved by a new national popular politics to restore democratic order and legitimacy.

The crisis of our democracy has been a long time coming. Globalisation and supranationalism have eroded national sovereignty. The market and corporate power have ridden roughshod over society and democracy. A managerial and technocratic consensual politics marginalised conflicts of interest, and so disenfranchised millions of lower middle and working class people who were losing out from the liberal market settlement of four decades. Politics has become dominated by a transpartisan elite. Its liberal right wing controls the economy, its liberal left wing controls culture.

The democratic system is unable to express the changed political feelings in the country. The failure of the party system to give political representation to those who have experienced the negative impact of globalisation has led to populism,  to the leave vote, and to energising a reactionary right. It has made redundant across Europe the progressive politics of Third Way style social democracy. The centre right has suffered the same loss of popular support as the centre left.

In searching for a way to resolve the crisis there are no familiar points of reference to navigate by. The political class has lost authority and neither the Conservatives nor Labour can offer leaderships capable of rising to the challenge. Those who are thinking about the country beyond Brexit must ask themselves, how do they take the political initiative in these conditions of radical uncertainty?

The first step in navigating a way out of the crisis is to understand it, and this requires a theory of political change. Still the best theorist of political change is the Italian Communist Antonio Gramsci.1 Despite his obscure phrasing and outmoded Marxist categories, few have matched his grasp of the role of the political party in the complex dynamics of political change. Using the political insightfulness of Machiavelli and drawing on Italian philosophical traditions, Gramsci avoids economism, sectarian intolerance, and the gnostic fantasies of Marx’s philosophy of history.

His method is to analyse the conjuncture. By which he means the combination of events, circumstances, social forces, cultural values and economic interests that structure our society at any given moment in its history. When these political forces are roughly in equilibrium a political settlement emerges. However it is in a constant state of flux. Opposing political forces engage in a ‘war of position’, contesting the meaning of the political settlement in conflicts around class interests, around moral, cultural and social issues, and over definitions of the historical past.

Gramsci calls periods of crisis when a conjuncture is breaking apart and a new conjuncture is emerging, an interregnum. The values and authority of the ruling power lose the consent of the people. Social classes become detached from their traditional parties which they no longer recognise as expressing their interests. Large numbers of people lose their traditional political loyalties. In this crisis ‘the old is dying and the new cannot yet be born; in this interregnum a great variety of morbid symptoms appear’.2

Gramsci describes how the new ‘cannot yet be born’. The forces defending the status quo struggle to overcome what are incurable structural contradictions. Those forces which seek to replace the dominant power are not developed enough, nor organised enough, to succeed in taking a leading role. No party has the consent of the people. In this state of political inertia there is an intensification of the war of position to win popular consent and determine the shape of the new period.

To win popular consent, a political party must develop a ‘national popular’ politics. Gramsci is vague about its exact meaning. He describes it as the bringing together of national and popular aspirations into what he calls ‘the people-nation’. This bringing together of people and nation is not reducible to class. It is populist in tone. Gramsci makes the nation, its culture, and what it means to its citizens, a central factor of political life. And he does not condemn populism as a political aberration but gives it a constitutive role in creating a party’s leading position in society.

The political theorist Ernesto Laclau develops this insight. He explains populism as the continuity of popular traditions of resistance against the powerful. These traditions are the residue of ‘irreducible historical experience’.3 Because they are more durable than class identities, traditions of popular protest provide the initial challenge to the status quo. A party gains popular consent to lead, what Grasmci calls hegemony, by creating an emotional and cultural connection with the everyday life of the people.

Populism is integral to building this relationship. It gives voice to the popular emotions generated by political conflict and constructs them into a collective experience of ‘us’ against ‘them’. To achieve hegemony a class or class fraction must be able to speak to these emotions, define the political conflict, and so develop a broad coalition of groups and classes to form a national-popular politics.

The radical right in its focus on nation and culture has been more successful than the left which believes that the national popular and what people want and need is fundamentally economic in nature. It has unthinkingly condemned populism and reduced Leave voters to an undifferentiated group of xenophobes, isolationists and authoritarians. In doing so it has reproduced the long-standing class condescension of the liberal intelligentsia and contributed to pushing populism rightwards.

Without connection to the ‘elementary feelings’ of the people-nation, it is impossible for a political party to make an historically meaningful national popular politics. Neither Conservatives nor Labour are capable of achieving it. Each party has become subject to the political dominance of a sectional class interest. For Labour it is the progressive, professional middle class concentrated in London. For the Conservatives it is a reactionary, rentier class fraction. The party memberships mirror these sectional interests and their exclusivist cultural values. They push their respective parties toward the purity of their ideological extremes and close off the necessary give and take of democratic politics. The memberships of both parties are the biggest obstacle to either building a winning electoral coalition.

The trans-partisan alliance of liberal market economics and progressive morality that has dominated politics can no longer explain the world nor provide a political and moral compass. We have known since at least 2010 that a national popular politics is radical on the economy, and socially conservative on the nation, security, defence, and social and cultural issues. An electoral majority in England can be built on a radical and conservative politics of earning and belonging. In this interregnum nothing is guaranteed, but the party that stands for the democratic nation and which can articulate this paradoxical politics of culture and economics will be able to build a winning coalition.