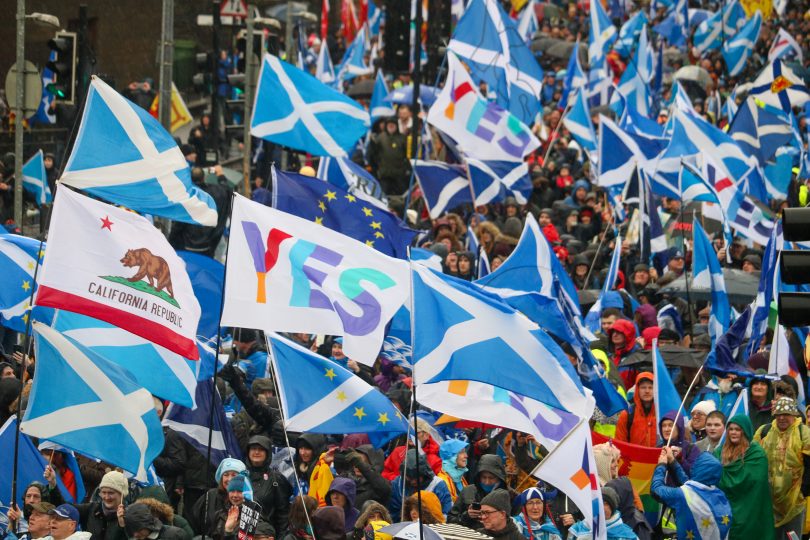 Dr Graham Gudgin suggests that the rules of an independence referendum for Scotland are too lax and should be tightened. The possibility of breaking-up a successful 300-year old union is too important to be decided by a minority of Scotland’s population.

There is no internationally agreed principle for the maintenance or breakup of states even within Europe. While Czechs and Slovaks are rightly proud that their ‘velvet divorce’ break-up of the former Czechoslovakia in 1992, was achieved peaceably their experience is not typical. At the other extreme, Catalan separatists are locked up and there seems to be no legal way of achieving independence for Catalonia. For all its liberal principles, and its previous encouragement of a ‘Europe of the Regions’, the EU exhibits de facto support for the integrity of existing states like Spain. It also opposes regional secession in Ukraine even when secession is locally popular even though it supported the breakup of Yugoslavia.

The UK approach arguably makes secession too easy. UK regions with devolved governments are free to secede as long as a majority of voters agree in a referendum. This principle was followed in the 2014 Scottish Independence referendum and is also built into the 1998 Good Friday Agreement which mandates the Secretary of State for Northern Ireland to hold a border poll if evidence suggests majority support for Irish unity. As in Scotland a border poll majority of 50% plus one vote is sufficient to detach the area from the UK irrespective of turnout at a referendum.

In these respects, UK governments have been remarkably insouciant about the break-up of one of the world’s most long-established and successful democracies. There has been only a perfunctory national debate on the value of the Union, leaving the field wide open for secessionists in Scotland and Northern Ireland. Few in the UK would follow the Spanish government’s hard line on regional secession but equally our own light touch approach risks losing the union through the votes of a minority of the Scottish population.

The willingness of the UK establishment to permit a break-up of the union so easily is surprising. England Scotland, Wales and Ireland formed a unified kingdom in 1603 and since then forged the world’s most astonishingly successful union pioneering modern democracy, as well as both capitalism and social security and spreading both across the globe. It is a union willing to spend billions to maintain uniform social standards, spending for instance as much to maintain public services in Northern Ireland as it did in its controversial contributions to the EU.

The ONS shows that living standards in Scotland and Northern Ireland are above the UK average once housing costs are taken into account and only a little below those in South East England. The willingness of UK taxpayers to finance uniform living standards is greatly under-appreciated. It is buried in the Barnett Formula for distributing public expenditure and this should be replaced by a much more transparent UK cohesion fund.

Loss of empire followed by membership of the EU loosened the sinews of national cohesion.  The temporary largesse of North Sea oil allowed the SNP to rise in popularity in the 1970s under the slogan ‘Its Scotland’s Oil’. The SNP has successful built on Scotland’s distinctive geography and history to undermine the many bonds of language, institutions and a shared 300-year history.  As John Lloyd has argued that ‘the SNP’s standard enshrines an ideal,[a] promise of a fuller civic life, a pledge – in a nation once famously pious, now shorn of faith – of a more meaningful existence’. This appeal may be wide and has a substantial majority in the latest polls, but for many is unlikely to be deep. That support for Scottish independence is wafer thin has been pointed out by George Kerevan a recent SNP MP and past deputy editor of the Scotsman. Within this context the SNP has played its hand extremely well under Alex Salmond and  Nicola Sturgeon even as oil revenue drips away and Scottish voters are offered the prospect of voting to give control back to the EU including pressure to join the unpopular Euro currency area.

If the SNP do well in next May’s Scottish Assembly elections the clamour for a second referendum may become irresistible. Such a referendum could be won by the SNP and if so a successful 300-year union could be broken up on the vote of a minority of Scots and with great consequences for the rest of UK who would have no say.

The 2014 referendum was organised under rules almost designed to maximise the independence vote and the pro-union campaign was conducted largely on the same ‘project-fear’ basis that failed so dismally for the government in the Brexit referendum.  This lackadaisical approach cannot be risked again. Any future UK referendum must be taken much more seriously with voting rules designed to reflect the seriousness of the issue

A decision of such historical importance not only for Scotland, but also for England, Wales and Northern Ireland, must be based on the soundest principles, avoiding the weaknesses of 2014. If the 2014 rules were reused, the electorate would include non-UK citizens living in Scotland and exclude Scottish-born UK citizens living outside Scotland. The latter would be eligible for Scottish citizenship in an independent Scotland but excluded for the decision on independence. The 2014 rules could mean that Scottish independence was gained with a 51% majority on a 70% voter turnout, i.e. with the votes of only 35% of the Scottish electorate.

A liberal and democratic UK has not denied, and would not deny, an independence referendum to a Scotland determined to have such a vote. It can and should insist that such an important and probably irreversible decision can only be taken by a majority of Scots. Only those eligible for post-independence Scottish citizenship should vote, and all such citizens should be eligible including the expats. To ensure that most Scots want independence, a yes vote should depend on a majority of the electorate and not just on those voting This is close to the rules used in the 1979 Scottish devolution referendum when devolution was supported by a majority of voters but failed because less than 40% of the electorate voted yes.

Such a hurdle might well prove impossible for the SNP. Having become accustomed to a low bar for independence referendums the SNP would of course cry foul. SNP politicians could persuade some Scots that the referendum was rigged but the logic and morality of such arrangements would be clear and easy to defend both in the UK and abroad. SNP objections would also call attention to the narrowness of the support for independence. The SNP’s strength has been its moderation and adherence to democracy and the rule of law, and it would be difficult for it to oppose UK law by attempting to run its own referendum.

This then would be the British way of deciding the rules of secession. It would be more liberal and democratic than Spain and also more democratic than in Czechoslovakia where no referendum was held and where public opinion opposed a breakup. It would also not repeat the lax approach of 2014. The new principle would be that a region can vote to leave but must demonstrate that a majority of its people favoured secession. Not only would this help to preserve the union but it would set the world an example.

Graham Gudgin is co-editor of BriefingsforBrexit and was formerly special advisor to the First Minister in Northern Ireland. He was born in Aberdeen. A version of this article was published on the ConservativeHome website.