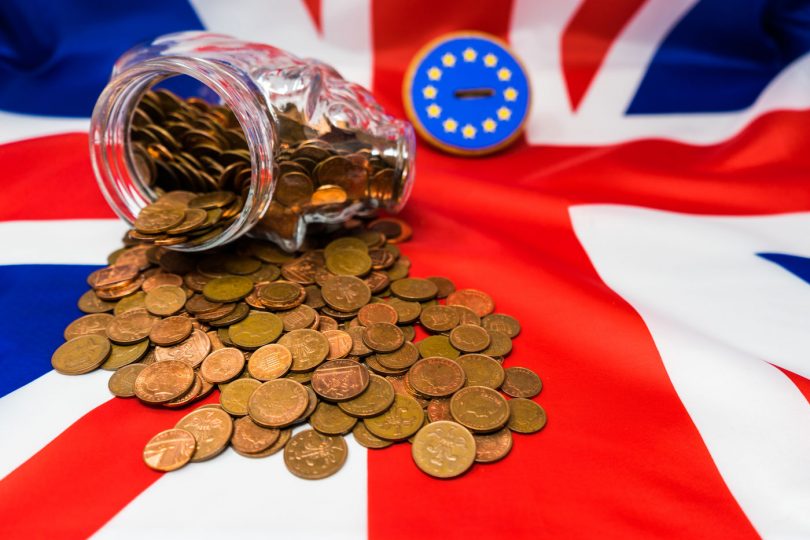 It’s another one of Theresa May’s goodwill gestures in the Brexit negotiations – after all, she’s the Ted Heath of our age

There is a financial crisis in Europe

There is a financial crisis in Europe’s banking system and it’s getting worse by the day. The main banks are pretty close to being insolvent. One reason is a history of making very poor investments. For example, Deutsche Bank has just announced it lost $1.6bn on a municipal-bond investment bought prior to the Global Financial Crisis.

Another reason is that the banks invest so heavily in their own government’s bonds – and these bonds are at high risk of default. The risk is greatest in Italy where the banks are the most exposed in Europe, holding €387bn of Italian government bonds, equal to 10% of their total assets. The yield spread of Italian government bonds above benchmark German bunds is approaching 3%, the highest it has been since 2013. ‘We should now call this a crisis’, argued Kit Juckes, a strategist at Société Générale. Given the size of Italy’s national debt, there is the danger of a ‘doom loop’ developing if the Italian economy fails to grow sufficiently to pay back the debt when it is due.  And Italy entered into a recession in the fourth quarter of 2018, the third one in 10 years.

Equally serious, Italian banks have a significant exposure to non-performing loans (NPLs) made to private-sector companies – a euphemism for interest and loan repayments not being made. The total value of NPLs is €264bn, around 17% of total loans made by Italian banks. About half of these loans are secured against collateral, but they are still only worth 25-30% of face value. Across the whole of the EU, the total value of NPLs is €780bn.

Even worse is the risk of contagion with the problems in the Italian banking system spreading to other member states, since banks and insurance companies in these countries have significant holdings of Italian debt. France is particularly badly affected. French banks have an exposure to Italian debt equal to 11% of French GDP. The largest exposures are BNP Paribas (€19bn), Groupe Crédit Agricole (€11bn), Groupe BPCE (€9bn), and Société de Financement Local, SFIL (€6bn). Many of these loans are non-performing.  As a result, many French banks are, like their Italian equivalents, technically insolvent.

The EU can do nothing about it

There are a number of measures that the EU could take to reduce the financial crisis.

One is to limit the amount of own-government bonds that a bank can hold on its balance sheet. This has been repeatedly proposed by the Germany, but is opposed by the more indebted countries keen to get their banks to buy the bonds that they issue. Another is a Europe-wide deposit insurance scheme – which involves risk pooling across the EU – to give confidence to bank customers in all member states. This would reduce the risk of capital flight from Italy and Greece to Germany where the banks are stronger, and hence enhance financial stability.

These are all essential components of the ultimate plan for a European Banking Union. But they are long way from being implemented. Germany won’t consider deposit insurance – which would have the effect of moving individual country default risk to the European level and hence putting it on the hook – before countries like Italy place strict limits on the amount of Italian bonds their banks can hold. But this is not on the political agenda at the EU. Yet the Sentix Euro Breakup Index at its highest level for more than two years.

All this affects banks in the UK too.  While they have low exposure to Italian banks, they have considerable exposure to French banks, so a domino effect is possible.  Even the europhile Bank of England has warned that a bank crisis in Italy could spark a doom loop in the UK: ‘if financial strains were to spread across the euro area, there could be a material risk to UK financial stability’.

Theresa May to the rescue – using your hard-earned savings

Brussels has asked for help from a friend – Theresa May.

The EU has been very keen to take control of the UK’s financial system in the Brexit negotiations.  This includes the capital markets in the City of London, our banks, building societies and pension funds.  Collectively, these are three times the size of the other countries in Europe – Canary Wharf alone does more financial services business than the rest of the EU combined. This is because traditionally the continent has used banks and assurance companies rather than capital markets to provide loans to customers – the so-called bancassurance model – but many of these are insolvent.

Powerful voices in the EU would like to rescue their banking system by imposing a ‘financial transactions tax’ every time a transaction takes place – this would be collected by the EU in Brussels.  Three times more would be raised from us than from customers on the whole European continent.  The tax per transaction would be small, so it would not be immediately obvious what is happening.  But these small taxes add up and they would be used to bail out Italian and French banks – with your hard-earned savings.

It’s just another one of Theresa May’s little goodwill gestures in the Brexit negotiations – in the same way that Ted Heath gave away our fisheries to gain entry into the EU in the first place.