Home » Economy & trade » How To deal With the North-South Divide 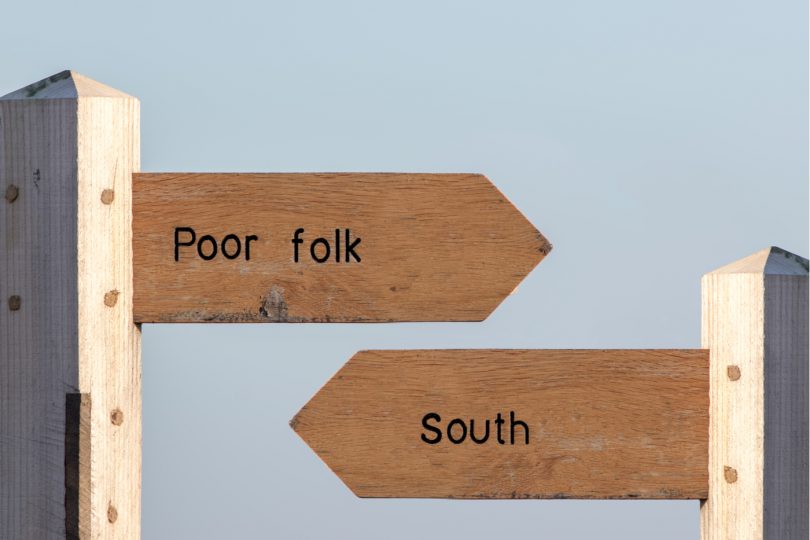 Leading Brexit campaigner John Mills argues that the best way of rebalancing the regions across the UK in a post-Brexit world would be to engineer a more competitive value of the pound sterling. Since he wrote this article the pound has fallen against the dollar and is nearer to the competitive level he advocates.

There is now a very large and still increasing gap between average living standards and prosperity in London and the rest of the country. The first table below exhibits the most recent figures produced by the Office for National Statistics (ONS) 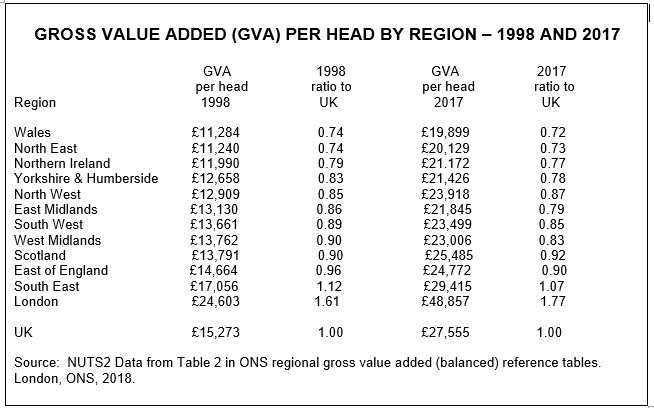 These figures not only show how wide the gap is between London and the rest of the country but also how during the last two decades London has pulled ahead in relation to the regions. Whereas in 1998, GVA per head in London was 2.18 times what is was in Wales, the poorest region in the UK,  by 2017 thus ratio had increased to 2.46. Both in 1998 and in 2017, every region in the UK outside London and the South East had GVA per head below the national average.

These figures correlate with others covering the trading performance of the UK regions.  The UK as a whole, as the following table shows, has a balance of payments deficit which has recently averaged not far off £100bn a year

Figures produced by the Greater London Authority, however, show London achieving a balance of payments surplus of a least £50bn a year.  This means that the rest of the UK, outside London, must be running with a total deficit of about £150bn.  With total UK GDP outside London being roughly £1.5trn, this means that, on average, everywhere in the UK outside London is running with a deficiency of income over expenditure of around 10%. Some cities outside London, such as Oxford, Cambridge, Manchester and Bristol, are evidently doing reasonably well and are therefore likely to be holding their own. This means, however, that other areas must be doing even worse – very probably running at deficits of 20% or even more.

Standards of living are also significantly lower in the regions than they are in London, but the difference is not as wide as it is for GVA.  This is because a large proportion of the UK’s redistributive capacity is involved in transferring resources from London to the regions through the tax and benefit system and in other ways. The sums involved, although they are very large, are clearly not, however, substantial enough to close the gap. They therefore leave major areas of the regions dependent on grants, loans, subsidies and asset sales to stop their average living standards falling still further behind those of London.

What can be done?

The government’ approach to this major national problem is to concentrate expenditure in the regions on improving their infrastructure, raising education and training standards, and increasing grants to local authorities and police forces. All these steps will help but the key issue is whether their impact is likely to be anything like enough. This is because the real problem suffered by the depressed regions in the UK – and indeed by similar regions across the world – is not that they are in receipt of insufficient subventions – which in the nature of thing will always be too little. It is that they do not have enough opportunities to create their own resources. In summary, what these regions need fundamentally is not more subsidies. Instead it is opportunities – which they badly lack at the moment – to sell sufficient goods and services to the rest of the world to enable them to prosper without subventions. How might this problem be overcome? There are essentially three approaches:

The first is for them to sell more of what is already being produced. More effective education and training, more flexible planning policies, better road and rail links, increased tax breaks for example on capital allowance, reducing energy costs and encouraging local firms to look or wider markets, all evidently have a role to play. The problem is that efforts to implement much of this agenda have been tried without much success over a long period, while the gap between London and the regions continues to get wider. Policies along these lines are just not effective enough.

The second is to get the regions to sell more new services. There is scope almost everywhere for some increase in tourism and hospitality. There may be some more scope for establishing higher education facilities, thus attracting additional foreign students. There are myriads of other services which, in principle, might be provided on a larger scale. The problem, however, is that services of all these types are relatively difficult to sell. This is exemplified by the fact that about 80% of the UK economy is comprised of services, which then make up no more than 45% of our export earnings.

By contrast, the remaining  20% of our GDP which is not services contributes almost exactly the same amount as services to our export earnings. On average, therefore, goods are about four times as easy to sell abroad as services, although averages may also be very misleading. London, with its exceptional market strength, particularly although not exclusively in financial services, sells disproportionately large amounts overseas. For a variety of cultural and historical reasons, London benefits from natural advantages in our language and geography, our legal system and universities and our labour skills, all benefits which are very difficult to replicate on a substantial enough scale elsewhere.

This leaves the third option, which is to provide the regions with the earning capacity they need by providing them with a major opportunity to reindustrialise, moving back towards the position which existed until around the 1920s, when the North of England was more prosperous than the South.  As the first column in the table at the top of page two shows, the UK has a huge deficit in manufactured goods, now running at nearly £140bn a year, close to 7% of our GDP.

If this gap could be closed by a major revival of manufacturing in the regions, the economy would be much better balanced. Furthermore, because productivity increases are so much easier to secure in manufacturing than in services, the overall growth rate of the economy would also be considerably higher – perhaps 3% to 4% per annum instead of the barely 1.5% per annum we have achieved recently.

Would it be possible to provide the UK regions with a major opportunity to reindustrialise? Yes, it would – but only as a result of a very major change of approach to our economic strategy. Critically, we would have to change our exchange rate policy from one of near benign neglect to one involving active management to make it profitable again to site a broad range – medium- and low- as well as high-tech – new industrial activity in the UK rather than elsewhere – in China or Germany for example. The reason why the exchange rate is so crucial is that, while one third of manufacturing costs on average are for machinery, raw materials and components, for which there are world prices, two thirds of costs are incurred in the domestic currency, These cover direct labour and managements pay and all overhead costs including those for interest and taxation, all of which are paid for in the domestic currency. It is the exchange rate which determines whether all these costs are charged out to the rest of the world at competitive or uncompetitive rates. 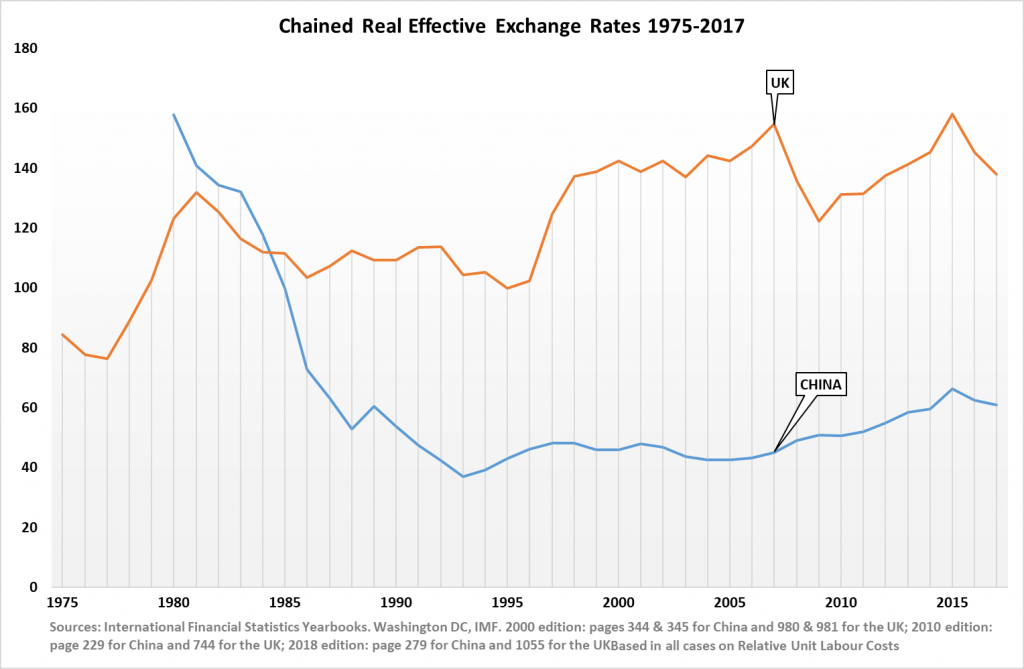 The graph above shows how uncompetitive we have become, evidence which is confirmed  by the precipitate fall there has been in the proportion of UK GDP coming from manufacturing over the past 40 years, and the continuing decline in the share of world manufactures provided by the UK – down from about 25% in 1950 to barely 2% now.. This is the condition we now need to reverse – by making our currency competitive and then keeping it there, as Germany did for many years and which successful economies such as Switzerland, Singapore and China do now.

Keeping the pound at about $1.30 may suit service-dependent London  and the City which generally operate in relatively non-price sensitive markets where we also have major advantages we lack in industry, but it is lethal for manufacturing which needs a parity of about £1.00 = $1.00 if we are going to be competitive enough to reindustrialise. Of course, a change of policy of this magnitude will be difficult.  If we don’t go for it, however, the gap between the North and South will continue to widen, the economy will continue to grow at no more than about 1% per annum, real wages for most people will stagnate or fall and our social and political – as well as our economic – divisions will get greater and greater. Is this really what we want?

This article was originally published by the Pound Campaign  Website: www.poundcampaign.co.uk