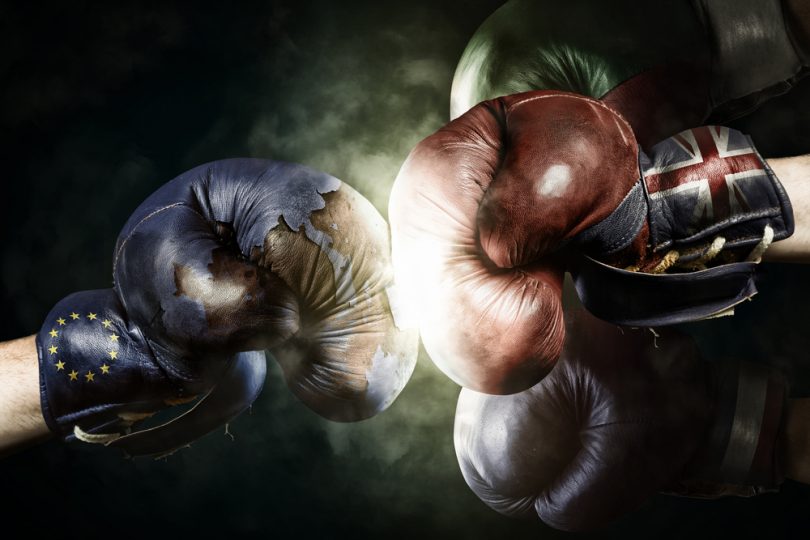 The EU and UK chief negotiators, Michel Barnier and David Frost, are engaged in a ‘blame game’ propaganda battle. Barnier’s claim that the UK is reneging on commitments made in the Political Declaration is disingenuous, and the government must counter it before it becomes established as the dominant narrative.

Although this article was written before the end of the fourth negotiating round, Barnier’s statement on the negotiations today, in which he repeated the lines discussed below, reinforces Dr Bailey’s points.

This article originally appeared on Brexit Watch and is reproduced with kind permission.

We enter this week’s fourth and final scheduled negotiating round between the UK and the EU with the rhetoric already having been ratcheted up several notches by both sides.

David Frost’s letter to Michel Barnier of 19 May was widely acclaimed by Brexiteers, delighted that at last we have a negotiator prepared to stand up for Britain rather than cave in to EU demands. Barnier himself was less pleased. ‘I do not think … that an exchange of letters regarding the substance of the negotiations is necessarily the best way to discuss on substantial points,’ he grumbled, before replying anyway.

Are we supposed to believe that an interview by Barnier in the Sunday Times – in which just two days before negotiations resumed he accused Boris Johnson of breaking promises – represents a more constructive approach? Of course not. The truth is that, with the talks deadlocked, the blame game is already beginning, and both sides are looking to get their narratives established early.

Frost’s letter may have been addressed to Michel Barnier, but he was never the intended recipient of its messaging. Frost’s first intended audience was the European Council, i.e. the national leaders of the EU27. Barnier is constrained by their negotiating mandate. The intended message for them was: Here are our red lines, and here is our reasoning. If you genuinely want a free trade agreement (FTA), the time to start being reasonable is now, not in November or December.

The second intended audience was us, the British public. Here the message was: Look, we’re trying our best to get a deal, but the EU is being totally unreasonable. Have a look at their demands and we’re sure you’ll agree. This is why there’s no point extending the transition period, and why we probably won’t be able to secure a deal.

Barnier’s choice of the Sunday Times for his interview (i.e. a British rather than a European newspaper) shows he is also keen to target audiences in the UK: Conservative MPs still nervous about trading on WTO terms who might pressurise the government into seeking an extension; EU-friendly journalists who will gladly report his blame game narrative.

Frost’s messaging: The EU is treating the UK differently to other third countries

Frost’s letter to Barnier criticised the EU’s offer as, ‘not a fair free trade relationship between close economic partners, but a relatively low-quality trade agreement coming with unprecedented EU oversight of our laws and institutions.’

The overriding message that ran throughout Frost’s letter is that the EU is treating the UK differently to other third countries. His letter focused on the unprecedented nature of the EU’s proposed governance arrangements, that are ‘not replicated in other EU agreements with third countries except those which aspire to join the EU.’ He pointed out that the EU ‘did not insist that the US made any “level playing field” commitments in the TTIP negotiations beyond those typical to an FTA, although US and UK trade flows with the EU are roughly similar.’

Barnier’s argument that the UK’s geographical proximity to the EU justifies such arrangements ‘is a novel argument in trade agreements,’ wrote Frost, pointing out that the US and Canada have a free trade agreement without either party seeing the need to subject the other to its own domestic laws and regulations.

Perhaps the most important part of Frost’s letter from a Brexiteer perspective was the following sentence:

‘This proximity argument amounts to saying that a country in Europe cannot expect to determine its own rules, simply on the grounds of geography, and that it must bend to EU norms. That is not an argument that can hope to be accepted in the 21st century.’

Frost’s reference to what is acceptable in the 21st century heavily hints that Barnier’s ‘proximity’ argument is merely a cover for what amounts to EU neo-imperialism – although he stops short of using that term. His point is borne out by the one-way nature of the ‘level playing field’: the EU is not required to match UK standards in areas where they are higher than the EU’s own.

Barnier’s messaging: The UK is reneging on its commitments in the Political Declaration

Rather than tackling Frost’s arguments above, Barnier sidestepped them in his reply, stating that precedents elsewhere are irrelevant:

‘Regardless of what your letter suggests, there is no automatic entitlement to any benefits that the EU may have offered or granted in other contexts and circumstances to other, often very different, partners.’

Obviously no country ever has an ‘automatic entitlement’ to provisions contained in an agreement with another country. Frost’s point was simply that the UK was not asking for anything unreasonable in the context of normal practice in FTAs, including those that the EU itself has signed with other countries.

Barnier must know he is on weak ground on the issue of ‘precedent’, because he dismisses its relevance on the basis that ‘[The Political Declaration] is the only precedent that the EU is following.’ It was already clear from this sentence that Barnier’s messaging was going to be that the EU is merely asking for what the UK had already signed up to in the Political Declaration, and that the UK is now trying to renege on its earlier commitment. And lo and behold, this was exactly the argument Barnier made in his Sunday Times interview:

‘We need to succeed in translating the commitments entered into by Boris Johnson … into a legal document, on the level playing field, on security, on horizontal governance of the agreement. We need to go back and re-read the sentences, the phrasing, that Boris Johnson agreed to and signed.’

This is a highly disingenuous accusation from Barnier. The Political Declaration is necessarily vague on details, because the hammering out of those details in negotiations had to wait – at the EU’s insistence – for the transition period. Both the UK’s and the EU’s proposals, despite the wide gulf between them, are compatible with the broad-brush outlines and ambiguous terminology contained in the Political Declaration.

Take, for example, the level playing field, which is covered in PD77. The wording in PD77 can equally well fit either the EU or the UK interpretation of what the level playing field should be. It refers to ‘prevent[ing] distortions of trade and unfair competitive advantages’ and upholding ‘common high standards’ – perfectly normal ambitions for an FTA. When PD77 refers to ‘appropriate mechanisms’, it would have been quite reasonable for UK negotiators to take this as referring to the usual kind of level playing field arrangements contained in FTA, including those the EU has signed with other third countries, that are defined relative to international standards.

As regards the other key area of disagreement – fisheries – if anything the Political Declaration is more supportive of the UK’s position than the EU’s. PD71 recognises that the UK will be ‘an independent coastal state’, while PD72 commits both sides to ‘preserving regulatory autonomy’. PD73 says that a new fisheries agreement on access to waters and quota shares will be ‘within the context of the overall economic partnership’ [emphasis mine] not part of it. This separation is reinforced by the fisheries agreement having its own separate deadline – 1 July 2020.

Frost’s core messaging that the EU is treating the UK differently to other third countries is both accurate and strategically sensible. It will strike a chord not only with Brexiteers, but with floating voters who do not feel particularly strongly on Brexit, but who do not like seeing the UK treated unfairly. During the May premiership, even half of Remain voters felt that the EU was trying to bully the UK in Brexit negotiations. This issue of ‘fair play’ will no doubt take on renewed importance in the propaganda battle on extending the transition period that is already upon us.

Given that it is now clear that the EU’s core messaging will be that the UK is reneging on commitments it made earlier in the Political Declaration, both Frost and the government will need to devote energies to debunking this claim too. The vagueness of the Political Declaration means that it is not difficult to present evidence to counter Barnier’s accusations. But it is essential that the government’s whole Brexit team – the PM, Frost, Gove, and the Cabinet and ministers collectively – now actively debunks Barnier’s claims of ‘broken UK promises’ before it becomes established as the dominant narrative.

Dr Anna Bailey is a political scientist specialising in British and Russian politics. She is a member of the Briefings for Britain advisory board, and the author of Politics under the Influence. Vodka and Public Policy in Putin’s Russia (Cornell University Press 2018).