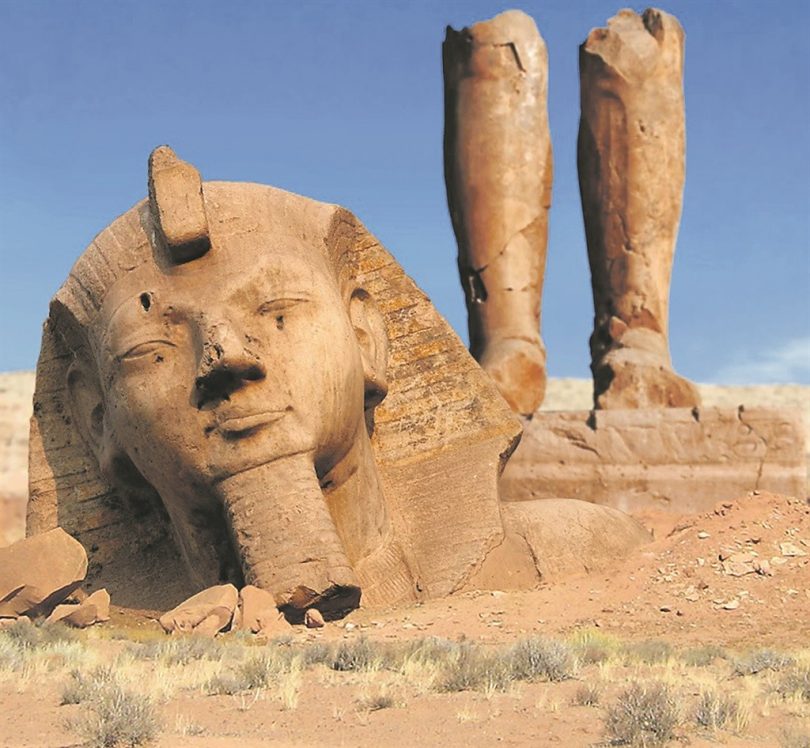 The European Union is at clear risk of collapse, according to a new study of the rise, decline and fall of human empires. The full study by Professor Gwythian Prins is published on the REPORTS page of this website.

The analysis concludes that the mounting complexity and declining legitimacy of the EU contains the seeds of its coming downfall, in much the same way that the Soviet empire imploded between 1989 and 1991.

It charts the rise and decline of what is now called the EU from the Schuman Plan of 1950 and the formation of the Common Agricultural Policy in 1958, saying that during the first 45 years of its life, the benefits of the various integrationist steps outweighed the drawbacks for the promoters of Europe federalism. But from the formation of the Euro nearly 20 years ago, the Union has been on the slide as its peoples have come to resent and oppose growing interference in their lives and the lives of their countries driven by high priests of the federal superstate – adherents of the so-called “Vanguard Myth”.

The study declares: “The tentacles of regulation reached ever wider and deeper under such instruments as the Social Chapter and on the road to the single currency. But the gains came harder and were fewer; and the rebuffs became more frequent and bitter.  “After much struggle and manoeuvre, in 1999 the Euro was launched and that was the apogee in the life of the EU so far… Since then, further added complexity has produced negative marginal gains.

“Since the turn of the century, things have been steadily falling apart. Belief in the triumph of the will to promote the Vanguard Myth has spun a vicious circle: the ‘project’ drives forward ever more relentlessly; and in reaction the people become ever more disaffected, making it necessary to impose more instruments of control more stringently.

“Gains for the ‘project’ have become increasingly pyrrhic because of the cost in social alienation.

“A major watershed was crossed in 2005-6. Divergence between the elite and their subjects was acute over the push for a formal EU Constitution. The grandiose …draft European Constitution was approved by governments but rejected by referenda in two core states, France and the Netherlands.”

The report has been written by Gwythian Prins, Emeritus Research Professor at the London School of Economics. It applies a research method to the EU that was created by the American archaeologist Professor Joseph Tainter, who has studied the factors behind the collapse of past empires such as Rome, Minoa and the Egyptian Old Kingdom. 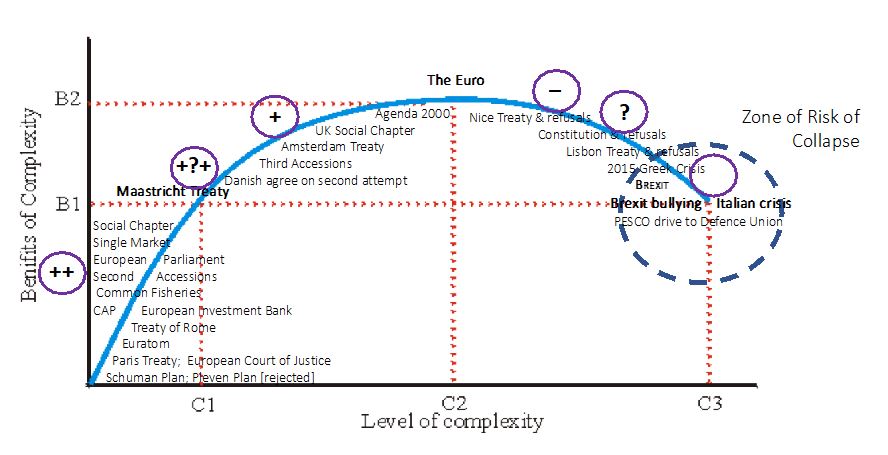 Professor Prins writes of the period after the curve turns downwards that seen from the point of view of those running the EU: “The dynamic has turned negative. The dragon we are riding has turned its head and it singes us with its fiery breath: for the greater the investment in more complexity at this point of our journey, rammed through because we Guardians know best, even as we know that many of our ignorant or stupid subjects are resentful and even mutinous, the more that investment is actually pushing our empire into the risk zone for collapse…   “We even have to force populations who make the wrong choices in referenda (as we judge them) to vote again until they make the right choices. Or we run out of patience and just ignore their votes.”

He details trends and events that show the mounting internal resistance to the remorseless imposition of the Empire’s rules, regulations and interference. Two watersheds are highlighted: the Dutch rejection of the 2005 European  Constitution later smuggled through as the Lisbon Treaty, which the Irish first rejected and then ratified and the period that opened with the 2015 Greek crisis, continued with the German backlash against Angela Merkel’s open-door immigration policy, the Brexit vote of 2016 and now the Italian crisis of 2018. “All this evidence of citizen rejection while the ‘project’ responds with further acceleration, has plainly taken the EU into the Zone of Risk of Collapse; and that is where now it stands, shakily but defiant, belittling, bullying, hoping to dishearten the British in order to deter any other prospective escapees and intent on punishing us for our sovereign decision to leave the EU. It is hardly a sign of self-confidence.

Professor Prins points out that the dictatorial and bullying Soviet Union lasted just 70 years and, when it fell, collapsed in a heap. He argues the EU shows similar characteristics which mean that it risks the same fate and that the vote to leave the EU by the British was a rational response to an organisation that was failing badly and no longer enhancing their lives.

He writes: “The ‘project’ is sixty one years old this month. Absence of cultural reproduction suggests that, like its older sibling (the Soviet Union), it should not expect to outlast a human life-span. In Tainter’s terms, people respond to sensed declining productivity of benefits from complexity quite logically, by opting to revert to a lower level of complexity commensurate with the public goods that they wish for and value. “Highly complex social organisations, Tainter reminds us, are recent in human history. If ‘loss of the umbrella of service and protection that an administration provides are seen as fearful events, truly paradise lost’ then collapse must be seen as catastrophe.  “But with his archaeologist’s sense of time-scale, Tainter ends by reminding us that ‘collapse is not a fall into some primordial chaos, but a return to a normal human condition of lower complexity.’ Collapse is not a synonym for catastrophe. It can be a salvation. “Think about what this implies for the logic of Brexiteers: ‘to the extent that collapse is due to declining marginal returns on investment in complexity, it is an economizing process,’ the archaeologist writes.

“So on Tainter’s analysis, we see that far from being a failure to adapt to the progressive advance of history by ignorant or stupid or culturally primitive racists “driven by nostalgia”, as Sir Vince Cable has just informed us from his taxi-cab sized political base, the decision to leave an EU that on political, economic and cultural indicators is squarely within the zone of risk of collapse, may be – actually is – the most appropriate and prudent response.”