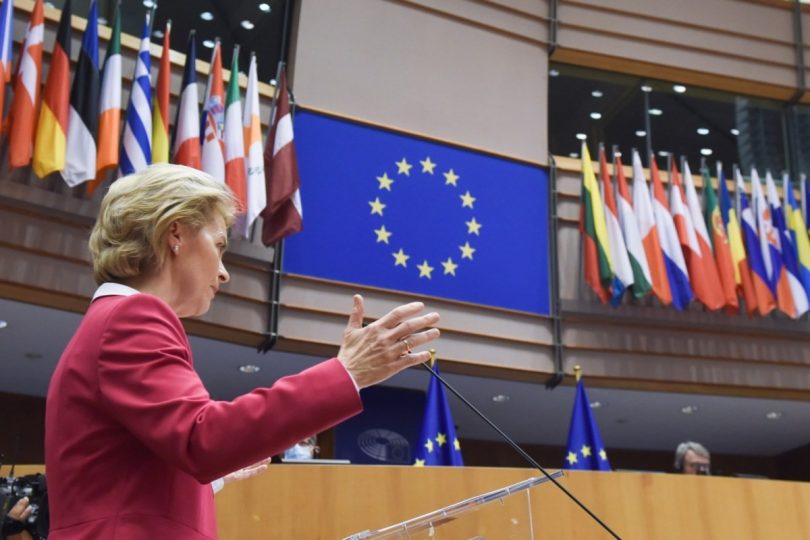 If there is one thing EU citizens deserve after COVID, it is justice, especially after the complete failure of its political class in this crisis.

In Germany no one is really surprised by the EU vaccine debacle. They have had to bear this sort of government performance for years. For example, the German armed forces have been reduced to a joke because its rifles don’t shoot straight, its helicopters are not operational or fall from the sky, its planes are often grounded or have become replacement parts depots, and its ships not seaworthy. The person most recently responsible for this was the former Defence Minister – now President of the European Commission – Ursula von der Leyen. Then there was the parliamentary inquiry or Germany’s Bundestag concerning corruption being conducted against von der Leyen just before she was bundled off to her job in Brussels. For the German Chancellor Angela Merkel the only solution was to give von der Leyen, a member of her Christian Democrat Party, a position that appeared to be a promotion and get her out of the line of fire in Berlin. The answer was to appoint her as EU Commission President. Ms Merkel was even prepared to sacrifice having Jens Weidmann made head of the European Central Bank, something the German government had prepared meticulously over years, to get rid of the scandal haunting von der Leyen and Merkel’s party.

One has to understand that Germany’s Ministry of Defence is less about the military security of the nation, and more about supporting Germany’s military industrial complex. In return there are generous remunerations, legal and illegal, for Germany’s political class. Just a few cases from the period when von der Leyen was German Defence Minister:

– In 2015 it was discovered that the accuracy of the army’s G36 assault rifle was severely impaired when the outside temperature is high and the gun is hot.

– Also in 2015 the first of the German Navy’s newly delivered NH90 Sea Lion naval helicopters delivered by Airbus Helicopters were grounded as “irregularities” were found in 150 parts of the aircraft.

– In 2017 after one of its submarines was damaged in an accident, it was discovered that the entire submarine fleet of Germany was not operational.

– Also in 2017 a German armed forces Tiger combat helicopter crashed in Mali, killing two soldiers. According to an army inquiry the cause was a maintenance error on the part of the manufacturer, Airbus.

– Later in 2017 it was discovered that of Germany’s heavy tanks – the Leopard 2, a triumph of German engineering – only 95 of 244 were operational.

– In 2018 media reported that only four of Germany’s more than 100 Eurofighter jets were operational, although the German government had pledged 82 jets to NATO for crisis situations.

But von der Leyen’s true accomplishment as Defence Minister was opening a new bung profit centre: external advisers. In 2019 a parliamentary committee of inquiry was established to investigate possible illegal awards of contracts to external advisers by von der Leyen’s ministry, especially to McKinsey. Von der Leyen’s junior minister was a former McKinsey employee. The committee established that as Minister of Defence from 2013 to 2019, von der Leyen had created a system of malfeasance, which, according to the Federal Audit Office, had cost taxpayers hundreds of millions of euros. According to German media, during the inquiry data from von der Leyen’s mobile phone, relevant to the investigation, were deleted; ministry files were inadmissibly redacted; others were destroyed. It was time to buy Ms von der Leyen a one way ticket to Brussels.

Thus it comes as no surprise that the Brussels-based NGO Corporate Europe Observatory (CEO) discovered that the EU Commission may well have engaged the private consultancy giant McKinsey to shape its Covid-19 crisis response. In a lengthy report entitled “When the market becomes deadly” CEO writes:

“Documents released under freedom of information law – albeit after a four-month wait – reveal that McKinsey & Company wrote to Health Commissioner Kyriakides at the beginning of March offering to help shape the EU’s response to the COVID-19 pandemic:

“On our side,” wrote McKinsey & Company Belgium and Luxembourg, “we have been centrally involved in helping governments and multi-lateral institutions shape their response to several global health crises, including SARS, MERS, and Ebola, in recent years. We have also helped WHO rethink approaches to health emergencies and are actively engaged in aiding governments – often in partnership with the private sector – organise effectively in the face of COVID19”.

The global management consultancy wanted to discuss how it “can best assist in the EU’s crisis response to COVID-19” and offered “to field a pro bono team on crisis response in the relevant structure of the EU Institutions” which “could leverage our many capabilities and resources”. In response, DG SANTE  suggested a video conference to discuss their “kind offer”, and then… ACCESS DENIED.”

The EU has always been a dumping ground for disgraced or redundant German politicians. There is even a quaint German rhyme “Hast du einen Opa, schick ihn nach Europa”, loosely translated: “If you have a superfluous elderly politician, give him a job at the EU”.

Many politically superannuated German politicians (and those from other nations) have used their time at the EU as a prelude to becoming successful lobbyists, for example the former EU minister Günther Oettinger. Oettinger was appointed EU Energy Minister in 2010. In a leaked diplomatic cable, the then US Deputy Chief of Mission in Germany wrote: “Chancellor Angela Merkel nominated Baden-Württemberg Minister President Günther Oettinger as EU Energy Commissioner primarily to remove an unloved lame duck from an important CDU bastion”. He was to hold three Commissioner positions at the EU, loyally serving the interests of Germany often to the detriment of Europe, until he retired in 2019 and opened Oettinger Consulting. He had “The Right Stuff” for a Brussels career. as Tom Wolfe might have termed it.

Von der Leyen definitely has all the right stuff as EU Commission President. When the COVID crisis began and EU nations were hoarding medical supplies and unilaterally closing their borders, von der Leyen was neither seen nor heard. Maybe doing nothing would be a better role for von der Leyen, since her efforts to coordinate an EU vaccination programme have, in the words of her boss Ms. Merkel, “got out of control”.

It would be crucial to find out if the EU was being advised by McKinsey or other external advisers and in what capacity in the botched contract negotiations with the vaccine producing companies, and if so which, and who had ordered these. We know that von der Leyen had already received a sharp rebuke from EU Ombudsman Emily O’Reilly for her arbitrary adviser policy. Ms O’Reilly criticised the awarding of a contract by the EU Commission to the largest investment fund in the world Blackrock to advise her on financing the EU Green Deal, without carefully examining possible conflicts of interest at Blackrock.

So now von der Leyen is not only responsible for the death of two German soldiers but tens of thousands of European citizens who will die because of the debacle she as Commission President is responsible for with the COVID vaccines. When the dust settles and there are calls for von der Leyen’s resignation, it is critical that this is accompanied with a criminal investigation.

Mathew D. Rose is an Investigative Journalist specialised in Organised Political Crime in Germany and an editor of BRAVE NEW EUROPE