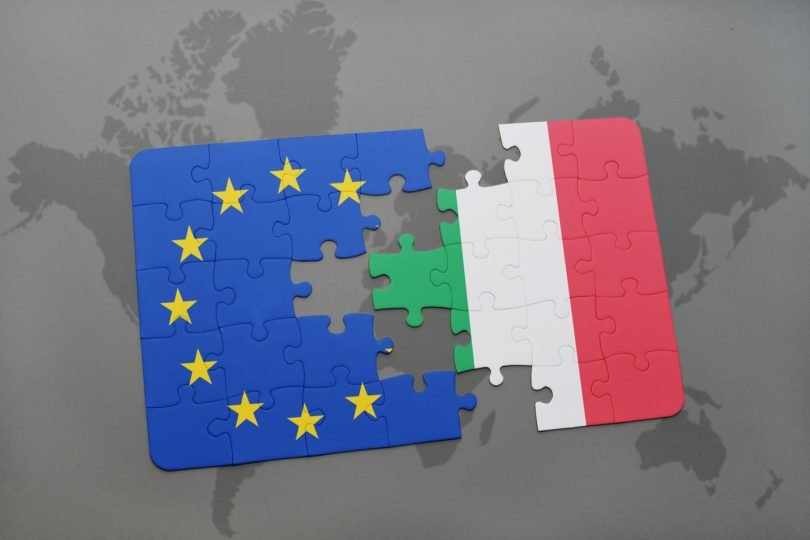 Euroscepticism is running high as the EU abandons the beleaguered country to its pandemic fate.

Europe is heading into its most severe economic crisis for decades. Its two biggest economies — Germany and France — are already in freefall. Germany is contracting at its fastest pace since records began, in 1970, while in France you would need to return to the chaotic days of 1968 to find a slump that is broadly comparable what is unfolding right now.

The numbers are terrifying.

Goldman Sachs has said that while it expects France’s GDP this year to decline by just over 7%, and Germany’s by 9%, Italy’s will slump by nearly 12%. The signs of the looming catastrophe are there. Italy’s manufacturers have just recorded their sharpest drop since records began.

More than four million businesses have been shuttered. Tourism has ground to a halt. And, in a cruel twist of fate, it has been Italy’s most productive northern regions where the full force of the coronavirus pandemic has been felt.

Some analysts have argued that this contraction and crisis will be short-lived; that Italy will ‘bounce back’ later in the year. But this raises a difficult question: bounce back to what? The country has, essentially, lost two decades.

As the economist Ashoka Mody has pointed out, Italy has been in an economic coma ever since it joined the Euro more than 20 years ago. Economic growth has flat-lined and living standards have stagnated; Italians have now spent all of the 21st century in a slow or no growth trap.

The country was heading into another recession at the end of last year. And it had already gone through three in the past ten years, without ever having really recovered from the last crisis. Before Covid-19 hit, Italy’s economic output was still 5% below the peak that was recorded more than a decade ago.

This is one reason why, last year, the International Monetary Fund forecast that even by 2024 Italy’s output will still be lower than it had been in 2007. The country’s public debt to GDP ratio has ballooned; for each of the past six years Italy has owed more than 130% of its annual economic output, a figure that will now almost certainly surpass at least 150%.

Its financial system has remained weak, and there are still too many non-performing loans. The country, meanwhile, is grappling with one of the highest unemployment rates in the Eurozone which, at 10%, is basically what it was nearly a decade ago. Youth unemployment has been far higher — at nearly 30% —which is one reason why you hear so many Italian voices on the London tube.

In short, it is hard to make the case that the average Italian today is better off than when their country joined the single currency more than 20 years ago. Certainly, some of Italy’s problems predate its membership of the Euro: the poor education rates, ageing population, lack of industrial modernisation and heavy reliance on small family-run businesses have not helped.

But it is also true that Italy’s inability to breach Eurozone spending rules and invest seriously in its own economy has left it trapped in a doom loop. Which, in turn, has left Italians feeling frustrated, fed up and deeply pessimistic about their future. At the end of last year, 90% of the Dutch and 83% of the Germans described their economic situation as ‘good’. In Italy, it was 17%.

Then, when Covid hit and Italians looked beyond their borders for help, European ‘solidarity’ was slow to appear — or did not appear at all.  Talk of unity, of learning from the mistakes of previous crises, quickly made way for nation-first approaches to closing borders and restricting the export of medical supplies.  Russia and China quickly filled the vacuum that had once again been left by the lack of leadership in Europe by sending supplies and workers.

When several states, including Italy, then asked their Eurozone partners to share debt, the more secure states in the north, notably Germany and the Netherlands, said no.  Anxious that a sharing of debt now might lead to the sharing of debt in the future, some in the north argued that financial assistance should come instead through the European Stability Mechanism (ESM).

But many in the south, shaped by the experiences of the past decade, and remembering the treatment of Greece, fear what strings will be attached to assistance. It is seen as a path to further austerity; last week, nearly half of all Italians rejected the idea of receiving help from the ESM because they see it as “a tool to impose Greek-style austerity”.

Meanwhile, the populist politician Matteo Salvini, who has been struggling in the polls, has taken full advantage of the situation. He’s now campaigning on the issue, stating simply: “No to the ESM”. Even if Salvini himself is not the beneficiary it is hard to see how Italy comes out of a renewed crisis with less rather than more populism. After all, it was the previous financial crisis that set the stage for the rise of both the ‘neither Right nor Left’ populist Five Star and Salvini’s League.

Their abandonment by the EU is clearly being felt by Italians as they sing to one another from their balconies. In recent weeks, nearly nine in ten said that the ‘EU is not helping us’, more than seven in ten felt that the EU ‘has not contributed in any way to addressing the crisis’ and nearly eight in ten resigned themselves to the view that the EU is unlikely to change

Other polls have recorded an increase in public support for leaving; today, more than one in three Italians say they would leave while less than half think this is a bad idea. Feeling abandoned, Italians have also become less trusting of the EU —with just one in four doing so — and more likely to say that their membership of the EU is a ‘disadvantage’, with 67% doing so.

All of this is raising big questions about the ability of the European Union to revive public enthusiasm in the broader project. As even the New York Times noted this week: the question to ask is not whether the EU will survive — because it will — but rather what is the point of any union if it cannot find unity when unity is needed most.

Passionate pro-Europeans routinely begin their columns and tweets with the famous quote by Jean Monnet: ‘Europe will be forged in crises and will be the sum of the solutions adopted for those crises’.  But many other things can be forged in crises — including Euroscepticism and a belief that, when it comes to the crunch, you really can only rely on your nation.

We tend to forget this now, but it was the EU’s fumbled response to two earlier crises — the Great Recession and refugee crisis — that convinced Britain’s Leave voters that being in this organisation was not in their longer-term economic interests.

Most Italians have not yet reached the same conclusion. But if you put Europe’s bungled response to Covid alongside Italy’s worsening economic picture then it is not hard to see how the different impact of the current crisis and the recovery to come might push them further in this direction.

When Italy eventually emerges from this crisis it will not only be a poorer country but will also be a more Eurosceptic one, too. And who knows where that will lead.

Matthew Goodwin is professor of politics at the University of Kent and Senior Fellow at Chatham House. He is the co-author of National Populism: The Revolt Against Liberal Democracy (Penguin)

This article was first published on UnHerd, which features other articles by Professor Goodwin,.