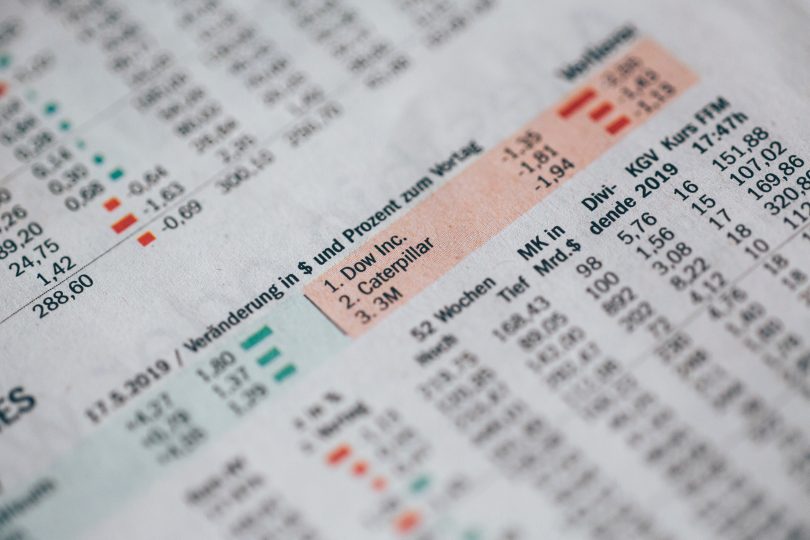 The UK economy has only just started to stabilise after the massive contraction caused by the spring lockdown and fresh restrictions may well snuff out a recovery that is very far from complete. Moreover, even the recent fragile economic upturn has only been achieved at a colossal budgetary cost. Paying out gigantic subsidies indefinitely is simply not an option, especially to finance coronavirus interventions whose efficacy is highly questionable but whose damaging impact – to health and wellbeing, as well as the economy – is undoubted.

Just a few weeks ago, we wrote about how Treasury plans to raise taxes sharply were premature and reckless in the context of a barely-there economic recovery. Those plans now seem to have receded, but the recent decision by the UK government to introduce additional restrictions on mobility and economic activity look equally dangerous and misguided.

It is important to understand just how incomplete and fragile the UK’s economic recovery has been. GDP crashed by 25% from February to April – a decline more than twice as large as that in Sweden, which has taken a more light-touch approach to dealing with the coronavirus outbreak. Since then, UK GDP has risen for three straight months, but it remains 12% below the level at the start of the year – only around half the GDP losses caused by the Spring lockdown have been regained (Chart 1). 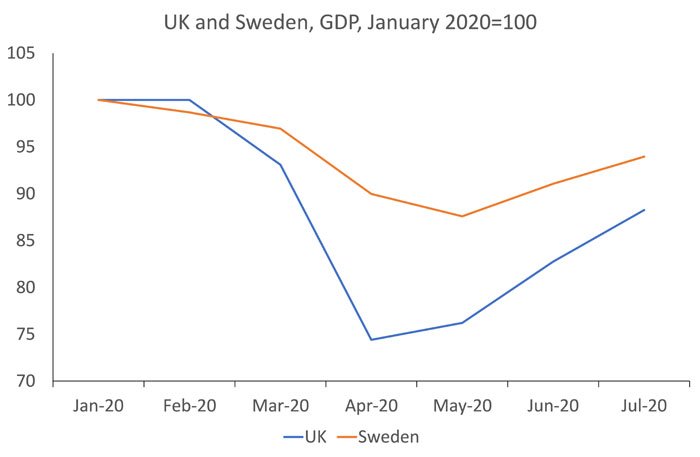 Retail sales recovered well over the summer, regaining their pre-crisis levels. But many important consumer-facing sectors are still partly closed or operating way below capacity. Output in the arts and entertainment sector is still over 30% down from February’s level, and output is still 60% down in accommodation and food services. Many firms in these sectors, along with those in much of the transport industry, are on life support.

Meanwhile, foreign trade is depressed, down 20% on a year ago, and a large number of employees (around five million) are still on the furlough scheme, at a cost of around £6 billion per month – a scheme which is about to be wound up.

Even this very partial recovery has come at a colossal budgetary cost. In April and May, the government borrowed over £40 billion per month, and while the recovery helped reduce this in June and July, borrowing ballooned out to £35 billion again in August. To put this in context, government borrowing for the whole of 2019 was less than £50 billion, about 2% of GDP. Cumulative borrowing for 2020 so far has already reached £170 billion (Chart 2) and is likely to exceed £300 billion for the whole year – some 15% of GDP, a level never before seen in peacetime. 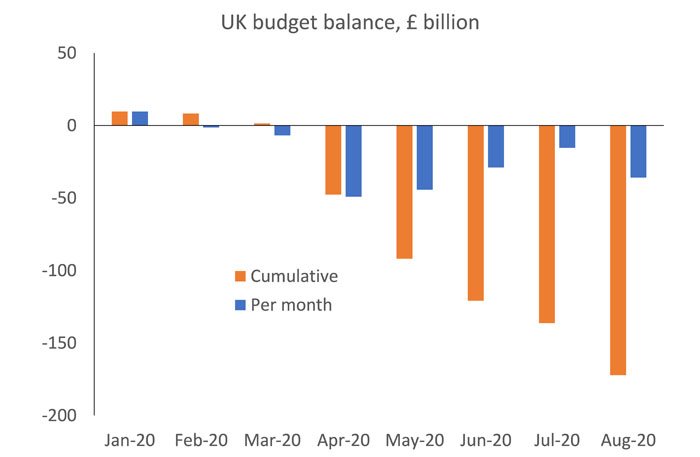 The UK has been lucky in that it had the fiscal space and accumulated monetary policy credibility to expand borrowing in this way and (effectively) finance it by central bank money emission. In this way, the government has been able to hold at bay the normal economic consequences of a GDP collapse of the size we have seen i.e. bankruptcies, high unemployment and plunging asset prices.

But borrowing on this scale cannot go on forever and the government’s rather modest support package announced just after the new restrictions illustrates this. Room for fiscal manoeuvre is already narrowing fast yet there is no early end in sight to the need for heavy borrowing. The government claims its new restrictions might have to be in place for six months, but given that this only takes us to March 2021 – and March this year was when the virus spread fastest – it’s not at all obvious why the current restrictions will be lifted by then. Indeed, the government is still threatening even tighter controls and is facing strong pressure for them from some parts of the scientific establishment.

Even six months of the new restrictions, and the atmosphere of fear that surrounds them, looks likely to sound the death knell for many consumer-facing businesses. The outlook is especially dire for the hospitality and tourism industries, labour-intensive sectors that employ around 3 million people or 8% of the UK workforce between them. Hundreds of thousands of redundancies are likely.

In this respect, it is important to note what happened earlier this year, when the government first ramped up the fear factor. Mobility indicators created by Google show sharp declines in retail and workplace settings in March, even before the formal lockdown started – the fear factor alone was enough to generate a partial voluntary lockdown (Chart 3). Mobility indicators improved from April to mid-September, but can we doubt that they will now turn downwards again? Offices, high streets and especially city centres are likely to be virtual ghost towns as the dark winter months begin.

Open-ended restrictions also massively increase the danger of permanent scarring of the UK economy. This was already a considerable risk, especially in the more exposed consumer-facing sectors, but now looks a near-certainty. Many businesses in the worst-affected sectors, with no prospect of a profitable future and the ongoing possibility of new and arbitrary regulations, may now simply decide to give up. Unemployment is likely to soar. The result will be lower growth and higher government borrowing for years to come. 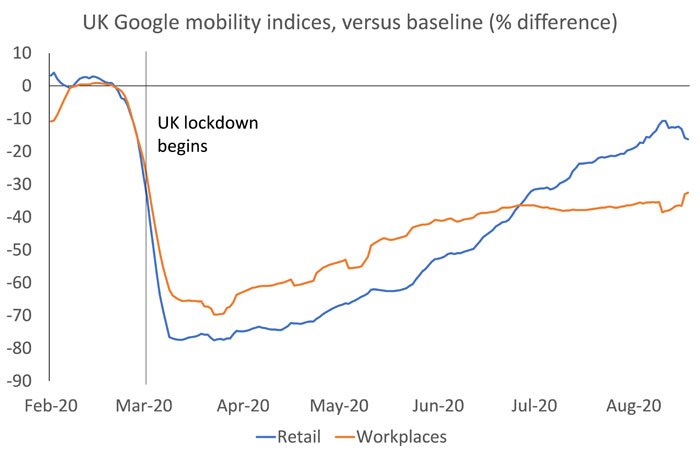 All this adds up, in the words of a recent New Statesman article, to ‘a world of low growth, high costs and permanent government intervention’. It is also conceivable that a renewed economic decline in the final months of this year will be sufficiently bad that it will badly derail government plans in other areas. Budgetary pressures connected with propping up failing firms and the incomes of the household sector could crowd out important infrastructure spending. The Brexit process may also be at risk with heavy lobbying for a ‘delay’ or extension of the so-called ‘transition’ period, or the acceptance of a bad deal.

All of this might still be thought acceptable if the government’s coronavirus policies had a reasonable chance of working. But in fact, their efficacy is highly questionable. The data guiding these interventions is of poor quality, with a serious problem of false positive test results which the government refuses to acknowledge. More seriously still, local lockdowns and restrictions brought in the North West of England in late July to suppress a viral outbreak there have failed entirely to do so. A short-term decline was followed by a massive spike and the number of cases there is some four times higher per head than in the rest of England (Chart 4). 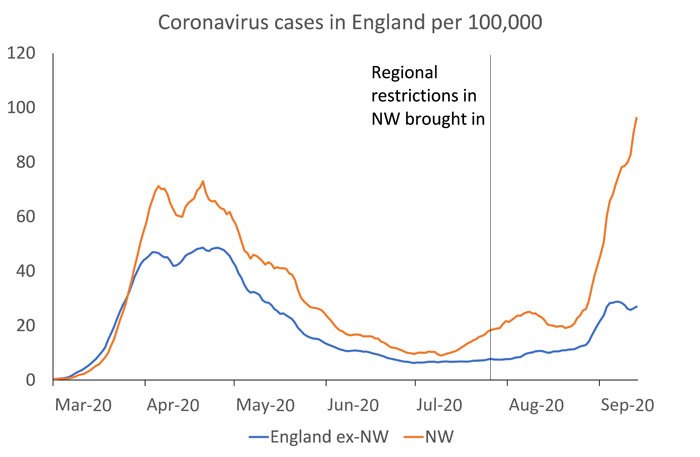 The government’s plan, if there is one, appears to be to try to suppress the virus until either a vaccine becomes available or some other miraculous technological breakthrough occurs. But this makes little sense. Such magic solutions could easily be years away and by the time they appear, current policies will have created a crippled, horribly shrunken and deeply indebted economy.

The government’s policies are not weighing the costs and benefits sensibly. Public borrowing on a wartime scale is being undertaken and massive long-term economic damage caused to combat a virus which currently affects about one person in a thousand, a large chunk of whom will show no symptoms and only a small fraction of whom will require hospital treatment. In addition, the human costs of this policy in terms of radically reduced quality of life, excess deaths from other conditions including cancers and heart disease and increased suicides are already very large. If restrictions are extended these other human costs will probably be far greater than the toll exacted by the virus itself.

Harry Western is a senior economist working in the private sector, and a regular contributor to BfB