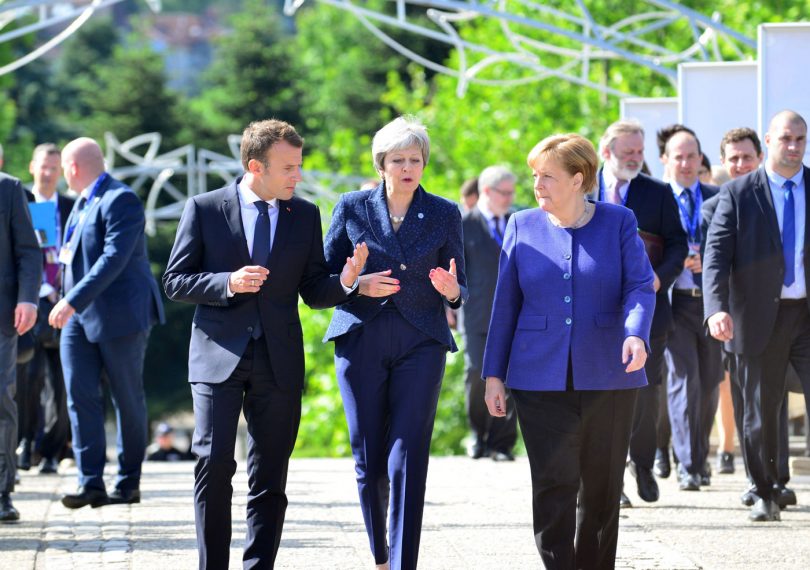 It is essential to complete Brexit. All those who love freedom in France and Europe need you to make a successful exit. They can then follow your example. Don’t let us down! We are counting on you!

My country, France, is going through a very sad period. I imagine that you are receiving images of the Yellow Vest demonstrations, which have now been taking place every Saturday for the past eighteen weeks. The Ministry of the Interior may minimize the figures, but there have never been less than 100,000 people demonstrating every Saturday in France since the beginning of this year. The demonstrators belong to the middle classes who are afraid of social downgrading; or to the working classes, to that France which lives “to the nearest euro», to use the title of a report broadcast on television. The Parisian commentators do not mention much beyond demonstrations in a few large cities. But what characterizes this movement is its omnipresence on French territory, even in small towns. A serious count of the number of demonstrators last Saturday, March 16, identified 210 demonstration locations.

The reasons for this movement are easy to understand even if they are violently rejected by our ruling classes. Our Yellow Vests are the cousins of the Brexiteers: they want to “take back control”! Since the early 1990s, France has deprived itself of an essential instrument of economic policy, the ability of our Central Bank to itself issue the currency needed by the country to be able to deploy its know-how, its desire to produce, its creativity. Our leaders, abdicating the country’s sovereignty, decided to align our monetary policy with that of Germany and then to have only one currency with our neighbours. This is absurd because the needs of France and Germany are profoundly different. For example, until recently we had dynamic population growth; but by practising Malthusian monetarism, like Germany, we are breaking the country’s desire to have children, just like the Germans. We have, because of the overvalued currency, imposed on ourselves an appalling instrument for deindustrializing the country. For a few years, our country’s governments, protected by the favourable interest rates of the euro zone, got away with it more or less by budgetary spending, the consumption on credit of German industrial products and the creation of public sector jobs.  But this has been over over since the 2008-2009 financial crisis. Since then, government after government, austerity measures have been piling up to meet the European Central Bank’s criteria of good management without helping economic growth.

You were right to choose Brexit

Dear British friends, why am I talking about the euro, since you do not belong to the eurozone? But precisely, having the chance not to be part of it must make you realize the immense advantage of staying away from the European Union altogether. When you voted for Brexit, your instinct was deeply correct. The European Community to which you had acceded in 1973 was a place of pragmatic cooperation between sovereign countries. But we have all seen in the last thirty years how the European Union has transformed itself into a rigid bureaucracy, unable to meet the challenges of the 21st century. Immigration is not controlled at all. The EU’s trade policy no longer allows a country to adapt to the industrial changes taking place in the world of networks, biotechnology and artificial intelligence. The common agricultural policy has turned against those it was supposed to serve, our farmers: one of them commits suicide every other day in France. European defence is a mere slogan: the only major concrete actions our country is taking are within the framework of the Lancaster House Agreements with Britain.

When I learned of the result of the referendum in favour of Brexit on the morning of 24 June 2016, I was deeply delighted. I saw it as a great hope for my country too, and for the whole of Europe. Your people have made it clear that they want to regain control of all their political decisions, to be able to adapt without unnecessary constraints to the creative economy, to no longer suffer from immigration that is not chosen, to no longer be subject to the jurisdiction of the European Court of Justice. For the past two years, I have been following your parliamentary debates with passion. First of all, I admired the fact that a Parliament whose members, in their personal capacity, had voted three-quarters in favour of the Remain, respected the popular vote and launched the exit procedure. The contrast with the French parliamentarians ten years earlier was welcome: in 2007, the deputies of our country reversed the result of the 2005 referendum in which the French rejected the European Constitution. They voted for the Lisbon Treaty, which was the European Constitution reintroduced under a different label. Habitually, democracy is trampled on within the European Union. Fortunately, you reversed this trend. You gave us hope again.

You must complete Brexit

However, I do not hide my growing concern from you. Why was the British negotiating position so weak, when your government had such strong cards in its hands? The countries of the European Union benefit greatly from trade with your country and would have made concessions if your government had banged its fists on the table from the outset. After Brexit, the City will remain one of the most powerful financial centres on the planet. Your economy has benefited greatly from the decline in the pound to increase its exports. The employment rate reached 76.1% in January 2019 in your country, the highest ever; the unemployment rate fell to 3.9%, its lowest since 1975. What other European country can be proud of such a record? Certainly not France or even Germany. You will be respected everywhere because you remain a great power. I repeat: your country could have spoken much more firmly, the EU, which only understands the balance of power, would have made major concessions.

Don’t let us down! We need your example to regain our freedom!

I long believed that your Parliament would give Theresa May the strength she needed to complete the negotiations. In particular, the series of votes on 29 January opened the door to a simple outcome: either the Prime Minister obtained a modification of the European requirements concerning the backstop, or Brexit was done without a deal. Why did your parliament then deprive itself of the threat of a no deal towards Brussels? Why the stalemate of the last few days? You are a great country. The markets are surprisingly resistant to uncertainty about you. But don’t waste any time. Leave the European Union on 29 March, on the scheduled date. Do not lose sight of the objective at the last minute. I understand and admire the spirit of freedom that is blowing through your parliament. But the impossibility of accepting the agreement prepared by Theresa May should not open up a breach for the minority who, in your country, believe that it is still possible to delay Brexit or even to neutralise the popular vote.

British friends, my country is going through dark days. The rule of law is violated every Saturday by the police, who attack and arrest the Yellow Vests, and by the courts who justify arbitrary arrests. Ordinary citizens who have committed no crime other than fighting for their economic survival are sent to despicable prisons. Our President organizes major debates that are not debates at all: he has as much sense of dialogue as Chairman Mao. The executive controls and invades the airwaves. Our upper middle classes do not have the wisdom of yours, who are looking for a compromise between « anywheres » and « somewheres ». Your Parliament is a place of defence of sovereignty, which, unfortunately, ours is not – except for the French Senate.

That is why it is essential to complete Brexit. All those who love freedom in France and Europe need you to make a successful exit. They can then follow your example!  Don’t let us down! We are counting on you!