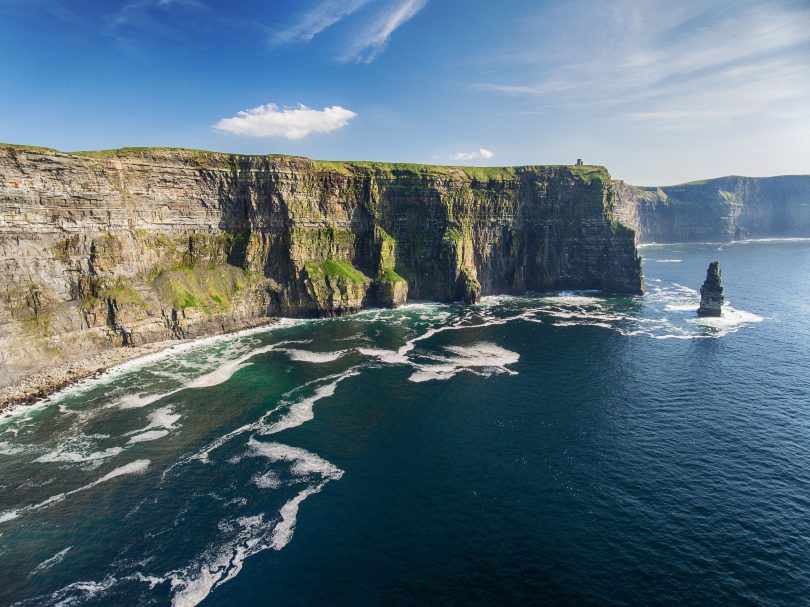 The border is a manageable issue, blown out of proportion by the Irish government

The prominence of the Irish border in the stage one negotiations and in the Progress Report (where it occupies 14 out of 96 paragraphs) is a triumph of Irish diplomatic manoeuvring over common sense. The consequences of the Irish border for future EU/UK arrangements are out of all proportion to the importance of the problem.

The crux of the problem is the Irish demand, and UK undertaking, to avoid a hard border on the island of Ireland. Everyone on the island, north and south, would prefer no checks or stops on personal travel. This is already agreed on the British side although it is less clear whether the EU will insist on checks on individuals carrying small amounts of goods. In its position paper of last August, the British Government also proposed that goods trade would involve no border posts or lorry stops. Instead electronic monitoring, trusted trader rules and exemptions for small business would be put in place. Jean-Claude Juncker dismissed these constructive proposals as ‘magical thinking’, but they represent a practical approach to the problems of a new border.

The EU have been supporting the Irish government in rejecting the British proposals, but it needs to be made clear that this hard stance by the Irish dates largely from last June when Leo Varadkar took over from Enda Kenny as leader of the Fine Gael party, and hence as Irish Prime Minister. Enda Kenny had been co-operating with the British and keeping northern unionist politicians informed of his discussions with Brussels. Irish preparations were underway for electronic border monitoring. Quiet discussions took place between civil servants in Ireland and Northern Ireland. Varadkar stopped all of this, for reasons never made clear. One possibility is that he realised that however accommodating the British were prepared to be on the border, the EU was always likely to be less flexible and demand border checks.

The most widely stated reason for avoiding a hard border is to maintain the ‘peace process’ in Northern Ireland. Many, including Tony Blair and John Major, imply that what is at stake is ‘peace’ itself, and hence a return of the violence of the 1968-1998 ‘Troubles’. This is incorrect. No one at senior level in Northern Ireland has suggested that largescale violence will resume. There is a residual danger of increased violence from dissident republicans, but this danger already exists and security forces already have to guard against violence directed at existing anti-smuggling measures on the border.

Technological and electronic solutions can keep traffic flowing across the border

The UK Government’s proposals on the border are practical and constructive, and mirror arrangements on many other borders, including the US:Canada border which uses drones as well as land-based cameras for surveillance. Most customs clearing is now electronic and much border surveillance is automated – viewers of BBC1’s McMafia will have see this depicted in Mumbai in the most recent episode. The EU is currently implementing its own Union Customs Code (UCC) which will streamline customs legislation and procedures, and complete the shift to fully electronic customs clearing. Larger firms can also apply for the status of compliant and trustworthy economic operators (AEOs) to reinforce swifter customs procedures. These reforms will be fully in place by 2020, and hence by the time the UK leaves the Customs Union. If there are specific details to iron out for the Irish border, the proposed transition period allows time to do this.

Although the EU is an inflexible rules-based organisation, it is to be hoped that a degree of pragmatic common sense is applied to the issue. For example, the EU currently claims that when the UK becomes a third country, the certificates for bottled water produced in the EU will no longer be available. At the point of Brexit, before which it was entirely satisfactory to import water, the quality of which does not change, imports could be banned from the EU, necessitating border checks.

Such nonsensical situations can be avoided with a degree of goodwill. Little goodwill has yet been evident, but may emerge over the coming year as European companies make their needs known to their governments. At present we do not know whether the EU hard line on trade is merely the tough negotiating tactics that experienced Australian trade negotiators have warned us about in relation to the EU, or instead represent a prolonged political sulk that may not go away. The frequent EU assertion that the UK cannot get better terms than EU members themselves is understandable, but the UK is seeking mutual benefit.

The Irish foreign minister Simon Coveney recently made the unhelpful comment that he hoped to see Ireland united in his “political lifetime” – one would assume he meant in the next twenty or so years. It would be helpful, to say the least, if Irish politicians would respect that part of the GFA which states that is the wish of the people of NI to remain within the UK. Continued references to Irish Unity are a form of political harassment which could at some stage inflame loyalist opinion.

The evidence suggests the Northern Irish people do not share his views. The most obvious recent measure of public opinion in NI was the result of last June’s General Election. This was a triumph for the pro-Brexit and unionist DUP which won all of the non-nationalist seats except Lady Hermon’s North Down seat, which it came close to gaining.

This is also borne out by the most authoritative survey of public opinion in NI, the ESRC-funded Life and Times Survey run by Queen’s University Belfast (QUB) and Ulster University. The latest survey was taken between September and December 2016, and hence after the June 2016 referendum and registered 69% support for remaining in the UK, with 19% preferring an eventual United Ireland and 4% an independent NI.

A free-trade agreement between the UK and EU will greatly ease the problem of the Irish land border. A move instead to WTO rules would greatly damage the Irish food industry which is already hampered by last year’s appreciation in the euro relative to Sterling.

Assuming an FTA is negotiated, which in my view is very likely, the main impediment to open trade will be regulatory alignment. In many sectors including pharmaceuticals and aircraft, the UK is likely to mirror EU regulations. If there is drift over time between the UK and EU in regulations on animal health and food production, it should be possible for NI to match EU regulations.

The existing British proposals for a light border need to be reciprocated on the EU side of the border. The Irish Government needs to be realistic and accept British bona fides resulting in a border virtually invisible to those crossing it.