Home » Blog » Brexit and Productivity: A house built on sand 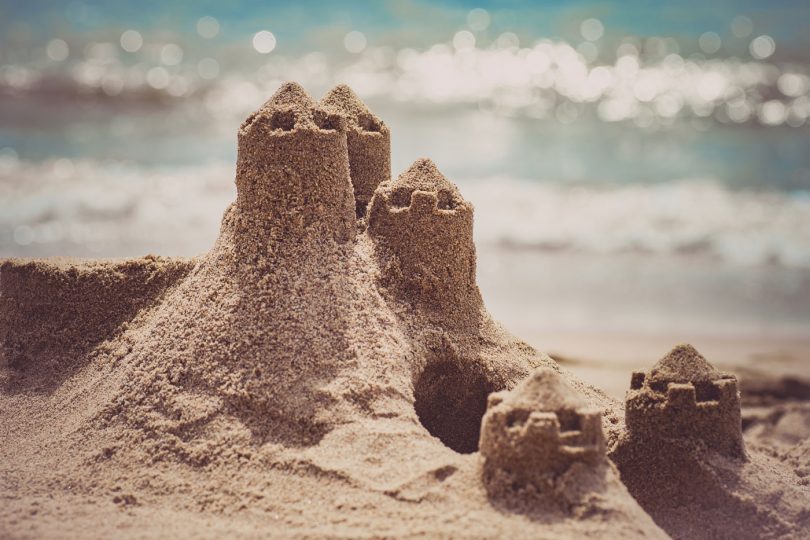 Much of the large negative impacts of Brexit estimated by the Treasury and others depend on an assumption that any loss of trade due to Brexit will be accompanied by a large decrease in productivity. In this article a senior economist argues that there is little evidence for such an assumption. This in turn implies that these estimates of the negative impact of Brexit are greatly exaggerated.

‘It is a foolish man who builds his house on sand’ goes the old aphorism. Yet this is exactly what much of the ‘official’ literature on Brexit, supporting Remain, has done. While the UK Treasury and its academic and official sympathisers would like the general public to believe that their estimates of Brexit costs are based on solid empirical work using state-of-the art techniques, the reality is often different. Nowhere is this truer than with their claims about the impact of Brexit on UK productivity.

Much of the economic debate around Brexit revolves around trade effects, i.e. the impact of Brexit on trade. But in fact, in most studies that purport to show large negative impacts of Brexit on UK GDP, it is not pure trade effects that are the most important factor. Instead, it is estimates of negative knock-on effects from trade losses onto productivity that are often the largest element.

For example, in the Treasury’s 2016 study of the long-term effect of Brexit, around half the effect comes from an estimated drop in productivity associated with a predicted loss in trade. Meanwhile, in the LSE CEP study of 2016, the proportion is closer to two-thirds. Both studies claim UK GDP might be up to 8% lower in the long-term due to Brexit with some 4-6 percentage points of this estimate based on productivity effects.

Do these massive estimated productivity effects have a solid empirical foundation? The answer is no. The economic literature they draw upon is inconclusive and the statistical associations they are based upon are at best unstable and at worst non-existent.

There are two main problems with the Treasury claim that trade boosts productivity substantially.

The first is the assumption made by the Treasury and others of a causal relationship running from trade to productivity.

In fact, it is just as likely that the direction of causation runs the other way, i.e. from productivity to trade. A literature review in the study by Wales et. al. (2018) suggests the weight of evidence favours the notion that productivity drives trade, noting that ‘there is considerably more evidence that more productive businesses choose to enter international markets. Evidence of the ‘learning through trade’ channel – which posits that businesses become more productive as a consequence of exposure to international markets – is scarcer’.

Some papers have attempted to get around the causation problem using various techniques, for example Frankel et. al. (1999) – cited in an earlier UK Treasury study from 2005. But the authors of this paper admit their results are far from decisive, being ‘not very precisely estimated’ and only marginally statistically significant.

The second problem is that the association of trade and growth in these studies often comes from studying a large sample of countries, mostly emerging economies. But if the sample is restricted to more advanced economies, the apparent statistical link between trade and productivity disappears. For a sample of 27 high income OECD countries, there is no significant statistical relationship between per capita income growth and export growth in 1980-2016 (see Chart 1)[1].

A recent firm-level UK study for the ONS (Office of National Statistics) also casts grave doubts on the notion that Brexit will lead to large negative productivity effects. This study shows that exporters to non-EU countries are in general about 20% more productive than non-trading firms (when allowing for size, industry etc.). But for exporters to EU countries, this ‘productivity premium’ is minimal (see Chart 2). Moreover, this study also suggests a negative link between export intensity and productivity. This makes it very difficult to argue that a decline in exports to the EU would have large negative effects on aggregate UK productivity. 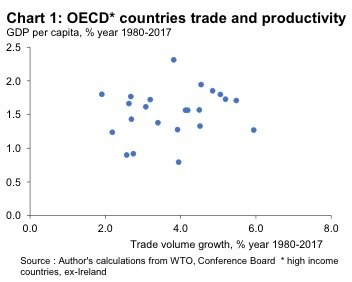 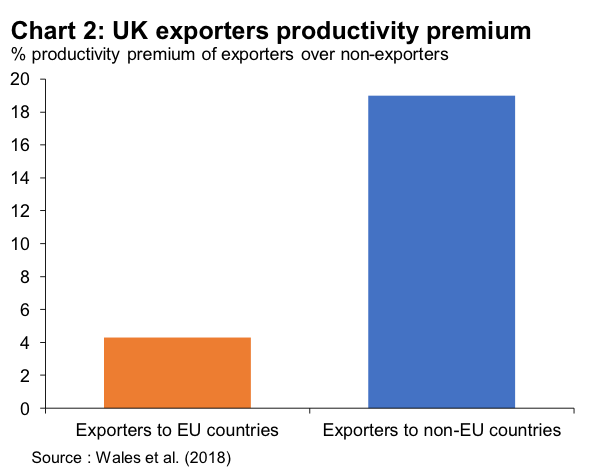 From the above analysis, it should be apparent that a very large chunk of the negative effects on GDP found by some studies of Brexit is based on extremely shaky empirical foundations. The fundamental concept of trade driving productivity, rather than the other way around, is questionable. And the empirical evidence for a link between trade growth and productivity growth in advanced economies is simply not there. With recent firm-level UK evidence also suggesting a minimal productivity premium among exporters to the EU, there is a strong case for dismissing entirely claims of big negative productivity effects in the UK from Brexit.