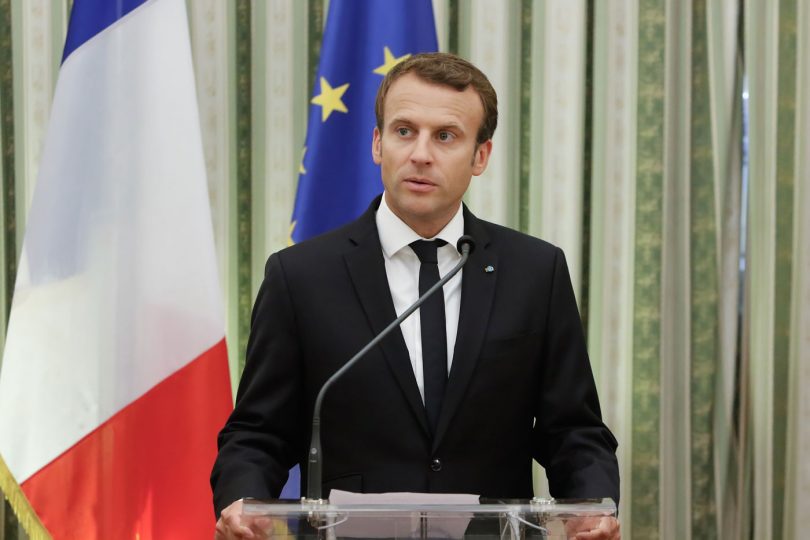 Let us redesign and reanimate the totality of the European project in a spirit of cooperation. At this point in history we are unlikely to succeed without the strength of your leadership.

I would like to congratulate you on your astounding electoral success.  Those of us who know and love France rejoice in your election to the presidency of the Fifth Republic. France, uplifted by the prospect of your leadership, has regained self-confidence and political will, after a painful period of introspection.  We wish you good luck in the long and difficult process of economic and social reform.

Your British admirers understand that Brexit is a secondary issue from your point of view, although in your recent book Révolution you describe it as a European crisis and the symptom of a degree of lassitude towards the European project.  I deduce from this that the future of Europe is among your major political preoccupations, even though the consequences of Brexit for the United Kingdom itself concern you less.

I appeal to your sense of history and strategy to analyse in depth the European crisis on one hand and the concrete effects of Brexit on the other.  Our two countries have a common history which, over more than a thousand years, has contributed to shaping the destiny of Europe in times of war and peace.  During the darkest hours of the last century, we both fought to protect the values of European civilization.  The Entente Cordiale, signed in 1904, defined our relationship, and its spirit still endures today.

We have always followed a distinct policy, convinced of our own difference from the other member states.  This explains our insistence on reducing our budgetary contributions, our refusal to join the Eurozone and the Schengen area, our incessant efforts to limit the political dimensions of the Union, and our unhappiness at Franco-German domination in many fields, without forgetting the ultimate efforts of former prime minister David Cameron to obtain further concessions in the light of the special position of the City of London.

Despite the divergent approaches of France and the United Kingdom towards membership of the EU, and our sharp differences concerning its political future, we have always maintained excellent bilateral relations on many subjects.  I am thinking in particular of our cooperation in defence matters, and in intelligence and security (my own special field) – cooperation that speaks for itself.  There is no other example of two European countries that have worked more closely together on these highly sensitive issues, which demand an especially high level of mutual confidence, which is manifest every day.

Great Britain has never had a long Continental alliance.  France should not therefore be surprised that a significant majority of British citizens has chosen to leave the European Union.  The European crisis, which you have described so acutely, has doubtless influenced their decision.

British concerns about the partial loss of sovereignty inherent in the European project are well established, as are those concerning the non-representative nature of EU institutions.  However, it is important not to confuse these concerns with the deeper political malaise affecting a large part of Europe.  The history of the United Kingdom is distinct, and that history has never allowed us to fully accept the consequences of membership of the EU.  Our membership, to be frank, has never gone very deep: our hearts were not in it.

At this stage of negotiation, France should play a waiting game.  But it will not have escaped you – you above all – that Britain’s exit from the EU is favourable to your ambitions to accelerate economic and political integration.  If the United Kingdom remained a member, your aims could not succeed: feeling our national interest threatened, we would take to the streets (as French patriots are so accustomed to doing) and your hopes for the EU would be blocked by our barricades.

Nevertheless, Britain needs a Continental Europe that is strong and well integrated: having left the European club, we would be ready to support this ambition.  For this reason, it seems to me that you have a golden opportunity.  For a French leader, it is the perfect moment to leave an indelible mark on the European Continent.

In this new vision of Europe – quite close to yours, I believe – France and Germany remain at the centre of a hard core of States attached to this political and economic alliance.  Around them would form an outer circle of nations wishing to share most of the fruits of this formidable union, without adhering to all its treaties.

In such a case, the United Kingdom would give its strategic support to the double structure, while remaining outside it.  We should remain Continental Europe’s closest ally, its most important commercial partner, and the leading European Power in matters of defence, security and intelligence.  I have not mentioned NATO, but Continental Europe has neither the will nor the means, it seems to me, to provide for its own defence and security.  Consequently, it will continue to depend on the United Kingdom and NATO.

Unfortunately, the European Commission is totally obsessed by the details of the existing treaties.  It has neither the means to elaborate a strategic vision of the future of Europe, not the mandate to do so.  The Commission itself in in crisis, and about to lose one of the Union’s most important members.

The European crisis has also undermined the authority of Mrs Merkel and has deprived Europe of its necessary leadership.  President Macron, destiny and chance have placed this burden of leadership on your shoulders.  Now is the moment for the nation-States of Europe to say to the Commission: ‘Enough!’  The Continent needs Britain, and Britain needs the Continent.

Freedom of movement, the rights of EU citizens, the jurisdiction of the ECJ, the Irish border, the ‘divorce bill’ – all are details when viewed in the light of history.  All could and should be easily resolved if the political will was there.  You, Mr President, can provide this political will.  In doing so, you would be acting for the good of the whole of Europe.

At the end of the Second World War, the international community did not try to punish the German people – even though there might have been reasons for doing so.  Instead, the international community offered very favourable credit terms to rebuild a devastated country – a magnanimity which still benefits Europe today.  Why then, should any member State, or the European Commission, act in a punitive manner towards the United Kingdom?  And that because the least enthusiastic member of the EU has simply chosen to return to a position more in keeping with its cultural and historical heritage.

President Macron, as you have yourself written, Europe is in crisis and profoundly uncertain about its future.  Nationalist and populist parties are in the ascendant in nearly every EU state.  You have become their most powerful and influential opponent.

The solution to the ‘European crisis of Brexit’, as you have called it, would be easier to find if Britain were outside the Continental carriage, while being supportive of its safe progress to its final destination.  British benevolence towards the Continent should receive comparable benevolence in return, as the UK follows its own path towards the destination of its choice.

Let us redesign and reanimate the totality of the European project in a spirit of cooperation.  At this point in history we are unlikely to succeed without the strength of your leadership.

Sir Richard Dearlove is former head of the Secret Intelligence Service, former master of Pembroke College, Cambridge, and Chair of the Trustees, University of London

The French text of this letter was first published in L’Express, 13 December 2017.