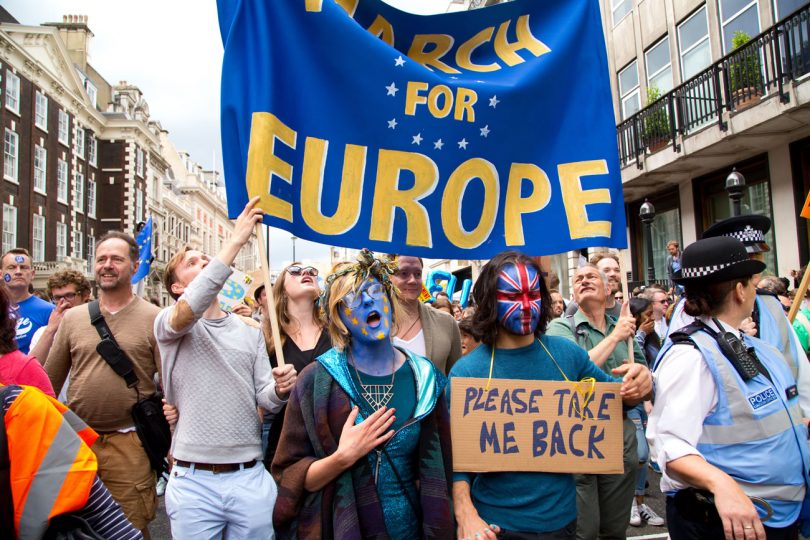 Brian Morris, a media consultant and former current affairs TV producer, argues that any examination of the actual choices that would face a voter in a ‘confirmatory vote reveals the falsity of the claims made by Remainer campaigners.

The campaign for a second referendum gathers momentum, in more than one sense. Under pressure from Momentum activists, unions and most of its MPs, at the time of writing it seems it may only be a matter of time before the Labour makes an unequivocal commitment to telling us to vote again, whatever the final deal may be.

If so, the dubious claims behind the People’s Vote or Confirmatory Vote campaign may reveal that in this case, fudge worked better than clarity. People who have shown little concern about the lack of democracy in the EU, argue that such a vote would deliver a democratic decision on the PM’s Withdrawal  Agreement, or any other outcome that might emerge. But they say little about the actual choice that would confront the weary voter.

If it became a choice between Mrs May’s deal or revoking Article 50, my Remainer friends would be unlikely to spend much time on deciding how they would vote. Theirs would be a simple and easy choice. But how should I vote? I don’t like Mrs May’s deal but neither do I wish to remain in the EU. While Remainers can choose what they want, I’m faced with unpalatable alternatives.

Must I sit down and read the 500 plus pages of the legal text that make up the Withdrawal Agreement? Some Brexit politicians judge the Withdrawal Agreement worse that staying in the EU. The Brexit vote might splinter with some Brexiteers voting Remain as the ‘least worse’ choice. But it’s even more likely that, faced with alternatives that are equally unacceptable, many pro-Brexit supporters would not vote at all. All of which means that a vote with a majority for Remain would have little validity and only serve to massively increase the bitter divisions in society.

Unfortunately for campaigners for a ‘confirmatory vote’, a title they have chosen, reveals another problem. If I fail to confirm something then it will not happen. Full stop. But failing to confirm tells us nothing about what might happen instead.

MPs have so far three times refused to confirm Mrs May’s Withdrawal Agreement by large majorities. But no one claimed that this on its own meant we had decided to stay in the EU. Indeed, they then proceeded to vote down a number of other options.

A fair and democratic referendum cannot pose a simple choice on one side and a complex one on the other. You might well call that a rigged vote. The EU Referendum, like the Scottish Referendum, offered voters the opportunity to choose a different destination. Planning and mapping the route to that destination would rightly be left to the politicians and civil servants.

A website for the People’s Vote tells us that we wouldn’t ‘sign a bill without checking it first so why should the Brexit deal be any different’. Apart from the fact that most of us don’t sign bills, we pay them, the Brexit deal will certainly involve a level of complexity that is, in fact, very ‘different’ from the average restaurant bill.

It’s a fair bet that many of the people now calling for a referendum on the Withdrawal Agreement, or anything that might replace it, were the same people who at one time were complaining that the choice in the EU referendum was far too complex for ordinary folk. Now they are desperate to learn our opinion about a weighty document running to over 500 pages.

Remainers also argued that referendums were not suitable for such difficult and momentous decisions as leaving the EU and should be left to MPs. Once again they have changed their minds, as they are no longer content to leave politicians to make the choice and insist that any decision needs to be confirmed by the people. Their sudden conversion to supporting referendums is welcome but suspect.

To be fair and democratic, a second referendum that had the choice for Remain would also need to have the choice for Leave. But we’ve already had that vote. There’s seems no good reason to run it again, since we have no idea what our future relationship with the EU will be after the Withdrawal Agreement ends.

The calls for a second referendum are dishonest because they are really a cover for another vote on leaving or staying, dressed in the threadbare clothes of a ‘confirmatory vote’. The only way you can have a fair and democratic confirmatory vote is if the choice is whether you support or reject the Withdrawal Agreement. It’s completely illogical and unfair to have a vote that stipulates that, if you don’t confirm, your only choice must be to remain.

Remainers will say that there’s no other choice now except to Remain or to accept the PM’s deal. Ironically, the May strategy, if we can dignify it with such a description, has been to drive the parliamentary processes to a point when these choices seem the only possible ones.

Except that they aren’t the only routes out of the impasse. Whether it’s Mrs May’s deal, no-deal or something different, there are always other choices if one is rejected. A new Tory leader who had voted against Mrs May’s deal could go to the EU and renegotiate.

Of course the EU have said they will not negotiate any further. But to base a referendum on the assumption that they will stick to their intransigence hardly makes sense. It in effect surrenders our negotiating position without further resistance. And since the EU doesn’t want a no-deal, they might reluctantly decide that a new Tory leader who has opposed the PM’s deal provides an excuse to negotiate a different option from Mrs May’s.

Unfortunately for second referendum campaigners, the EU won’t negotiate our future trading relations with the other 27 members until Article 50 has been triggered. This means that any vote after we had left would face the hurdle that people would decide that the dreadful dead had been done, so let’s get on with it and see how it pans out. Changing our minds would be rather like an errant husband who ran off with his secretary, facing the humiliation of begging to return to his wife’s arms. And you can bet the EU would take full advantage of our humiliation.

Maybe though, if there’s an appetite for it, we could have a referendum on returning to the EU in 40 years time. Always assuming that there still is an EU.