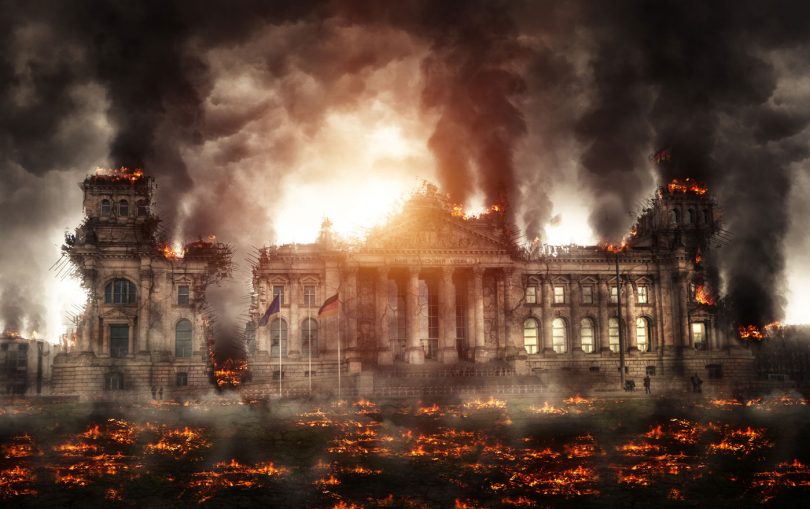 A prominent British historian has suggested that the present government may be bringing about “Britain’s Reichstag Fire decree moment” — the pretext that enabled the Nazis to seize uncontrolled power in Germany and crush democracy. A moment’s reflection shows this to be blatant hyperbole to provoke extreme emotions.

“[T]his power of a Premier conscious of his own popularity, to destroy the House of Commons which put him in office, and to appeal from the House to the nation, has been treated by Bagehot as one of the features in which the constitution of England excels the constitution of the United States.”

AV Dicey, Introduction to the Study of the Law of the Constitution, lxxi

Professor Richard J. Evans, former Regius Professor at Cambridge, is one of Britain’s most prominent historians. His latest contribution to the Brexit debate shows the extent to which Brexit can bring out unreasoned hysteria from its strongest critics, however learned.

In a recent article in Prospect, Professor Evans goes through the decline of the Weimar Republic and its overthrow.[1] Although admitting that Trump and Johnson are not conducting themselves in manner of Hitler, the article converges on the conclusion that the sidelining of the Reichstag was key to the rise of Hitler and Nazi tyranny. Complaining about the proroguing of parliament, he adds that

There have been signals, too, that a potential vote of no-confidence could be shrugged off with contempt. If that were to happen, parliamentary democracy would truly be in trouble in this country. This is Britain’s Reichstag Fire decree moment.

It is important that those such as Professor Evans understand what is actually proposed and its constitutional context before throwing around such accusations. It is anomalous to rage as he has against the “judges against the people” tabloid headline, whilst indulging in equally emotive and unfounded accusations against those who cause him political frustration.

The reality of the proposals – a dispute about statutory interpretation

What is actually at issue is whether the Prime Minister would remain in office for fourteen days after losing a possible vote of No Confidence, following which the Fixed Term Parliaments Act would trigger a general election.

This would mean that the result of a vote of no confidence remains precisely what it would always have been prior to the Fixed Term Parliaments Act. Before that Act, if a government lost a vote of no-confidence, the Prime Minister could go to the monarch and ask for a dissolution of Parliament. There would then be a general election to elect a new Parliament.

It might be thought that it is sharp practice for Boris Johnson to deny the opposition a chance to form a government, but it has never been compulsory for this to be done. The Fixed Term Parliaments Act suggests that there will be an opportunity for a vote of confidence to be passed in the government in the fourteen day period (hence nullifying the earlier vote of no confidence), but it does not say that alternative Prime Ministers should be given a chance to form a government during that interval.

There is, of course, an argument that if the opposition can form a coalition that would win a vote of confidence it should have that chance. If the Prime Minister were to refuse to allow that opportunity, then he would arguably be standing on the letter of the Act against its spirit. That is undoubtedly a dangerous place to be as judicial interpretation is often the art of narrowing the gap between the law’s letter and its spirit.

However, it would also be against good sense if the Prime Minister of a party which is close to a majority had to stand aside for an opposition leader to become Prime Minister even if she or he had only a remote chance of winning a subsequent confidence vote. To do so would mean that Jeremy Corbyn (for example) would become and remain Prime Minister into the election period even were he to lose a vote of no confidence by a country mile.

So there is no Reichstag moment. There is a dispute about statutory construction. The Fixed Term Parliaments Act does not set out a procedure for what happens after a vote of no confidence. It does not require a sitting Prime Minister to resign to give the leader of the opposition, or an opposition nominee, the chance to form a government. Governments are entitled to act on their interpretation of the law; and opponents are entitled to have the issue determined by the courts. A dispute on statutory interpretation is not a constitutional coup or crisis. It is something that happens in any democracy.

Appeals to the next Parliament

There is another important point that Professor Evans has overlooked. It is the point made by AV Dicey, himself citing Walter Bagehot, another of the great writers on the British Constitution. It is never been considered unconstitutional for a Prime Minister to end his or her problems with the current House of Commons by triggering a general election and taking the chance with the electorate’s choice of a new Parliament – in Dicey’s own works, “to destroy the House of Commons which put him in office, and to appeal from the House to the nation.”

Remainer MPs might feel aggrieved that they are being denied an opportunity to overturn the effect of the Brexit legislation that they themselves have previously passed – but that is hardly a step towards tyranny.

This is how it always was before the much criticised Fixed Term Parliaments Act. It is not a constitutional outrage to use the latitude in that Act to achieve the same result as in the past, with only an added fourteen days in the timetable.

Unless the Prime Minister burns down the Palace of Westminster and starts locking up opposition politicians in the lead-up to an election, talk of “a Reichstag moment” is absurdly wide of the mark. Such accusations are hyperbole designed to whip up the emotions of those who share Professor Evans’s political sympathies.

‘Titus’ is a young academic lawyer who prefers to remain anonymous.